Confiture is the French word for jam or fruit preserves. Gelée is French for jelly, as in gelée de coings or gelée de pommes. Confiture and gelée are put up in pots, which we call jars. This post is about making gelée de coings, quince jelly.

I don't know if I had ever made jam or jelly before I moved to Saint-Aignan. It's partly because there is so much fruit available here, ripe and free on the trees. Over the past 5 years, we've made jam with peaches (20 lbs. of them!), cherries, and several varieties of plums, and jelly with apples, quinces, and grapes. Wine grapes. Apparently, many people here in Saint-Aignan make jellies and jams. The supermarkets have special sections for canning supplies — jars, funnels, paraffin — this time of year. 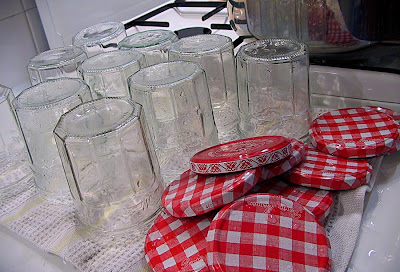 Getting the jars ready to be sterilized in the oven
One of the most tedious parts of jelly-making is sterilizing the jars and lids you plan to pack the jelly in. In a book I have called Mes confitures, by Christine Ferber (and with a preface by no less a personage than Alain Ducasse), I read this:

In my opinion, the oven method is much easier than the boiling water bath method for sterilizing jars, especially if you are making a large quantity of jelly or jam. It takes a while to get a big enough pot of water boiling, and it steams up the kitchen. Besides, at the same time you have the confiture bubbling away on the stove. There's too much going on.

Nowadays, I wash the jars and lids, or at least rinse them in very hot water, and then put them into the oven to dry. The heat and steam will sterilize them. Handle them with tongs to avoid contaminating them — or burning your fingers. 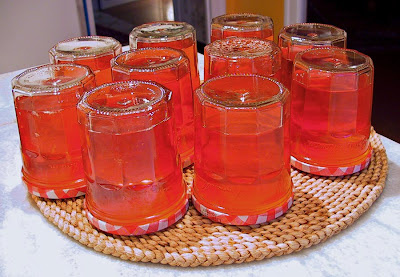 I'm not sure what the theory is behind turning the jars
of hot jelly upside down to cool, but I do it now.
I had made 2.5 liters of quince juice, so I used 2.5 kg of sugar. I mixed the sugar with the cold juice and just let it sit for about 6 hours before I started cooking. I noticed when pouring it into a deep wide pot that it had already started to jell. 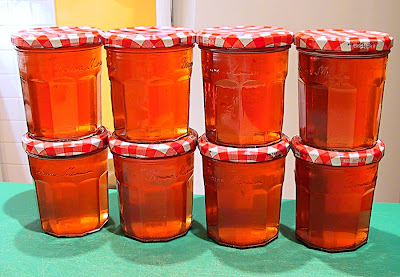 Put the quince juice, the sugar, and the lemon juice into a big pot.

Bring it to a boil, skim off the foam, and let it boil on high heat for 10 minutes. Skim it again as needed.

Test the jelly to see if it coats a spoon, and let it boil for a minute longer.

Put the jelly up in jars and seal them. 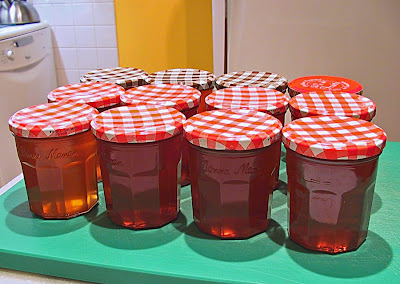 All 12 jars — they all sealed, which is imporant
if you want to store them for a while
While the jars were in the oven, I brought the sweetened juice to a boil on the stove, stirring it constantly. I decided not to use the lemon juice because I wanted the jelly to taste purely of quince, which is tart enough anyway. Once it started boiling, I turned the heat down a little and let it bubble and boil for 6 or 7 minutes. Then it was time to start filling the jars.

I used a jelly funnel to keep from getting jelly on the rims and threads of the jars. I ended up with 12 Bonne Maman jars of gelée de coings. (Thanks to CHM for the jars.) The lids popped down and all the jars sealed. 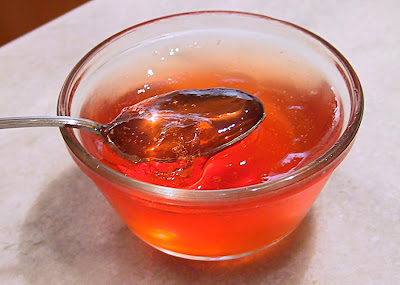 Quince jelly — gelée de coings
One thing that I've noticed here is that most people re-use jars. They don't buy special ones just for jelly-making. The recycled ones seem to seal and work just fine.

Just before I was going to start ladling the jelly out of the pot and into jars, I thought to myself that it looked pretty cloudy. I skimmed the white foam off the surface of the jelly, and all of a sudden the jelly got very clear — translucent, I guess you would say.

I didn't use a thermometer to judge whether the jelly was really ready, but I did use the cold-plate method. Put a little plate in the fridge and let it get chilled. Then take it out and dribble a little of the jelly on it to see if it sets up. If it does, you're ready. If you use a thermometer, Madame Ferber says, cook the jelly until it gets to 105ºC (221ºF). 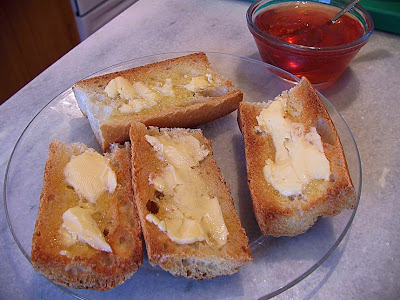 Toast with butter and quince jelly for breakfast this morning
Now what am I going to do with all this jelly? Jelly roll cakes this winter, I guess. Gifts for friends and neighbors. Take some to my mother in North Carolina when I go see her. I guess I should start eating toast and jelly for breakfast every morning.
Posted by Ken Broadhurst at 08:19