The garden in winter

This year we decided to cover our vegetable garden plots with leaves in an effort to keep weeds from taking them over during the winter. At first, I wanted to cover the plots with tarps, but leaves make more sense.

It doesn't get cold enough here in Saint-Aignan to keep the native plants from growing in wintertime. Tilling the plots after plants have had a chance to take root in the soil is like starting over again every spring, and it's quite a chore. Last year, we had piled up leaves on just part of one plot, and I noticed the ground where that leaf pile had been was much easier to work in. 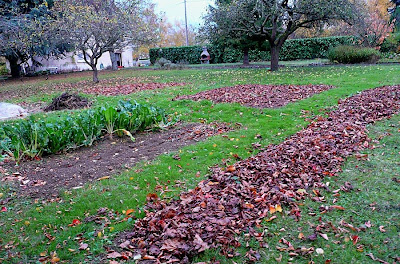 The long row is where we planted tomatoes —
the layout makes it easy to harvest them.
We have a lot of leaves. The big red maple trees out front produce a great quantity of them. Walt raked and picked up a ton of them a few days ago, and I spread them over the garden as he rolled them out back in a garbage tote. Depending on how much they decompose, I might be able to just till them into the soil in March or April, as we prepare for planting in May. 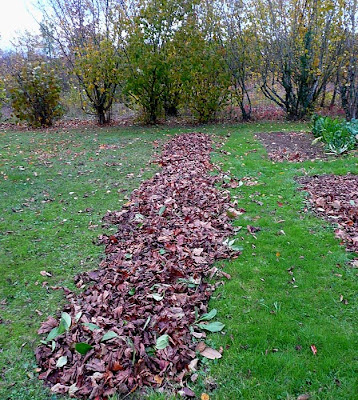 Hazelnut bushes in the background
As long as the wind doesn't blow all the leaves away, we should be in good shape. It has been windy, but it has also been very rainy since October 31, and the leaves are heavy and stuck together. So far they have stayed where we put them. 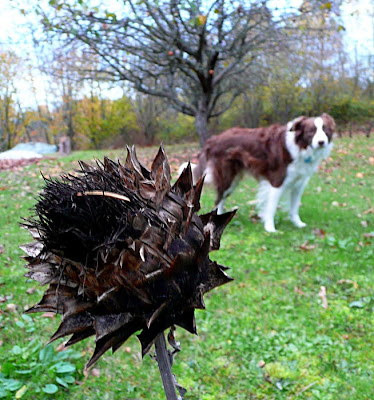 Callie behind a leftover artichoke blossom
It's also very mild right now. Yesterday morning when I stepped outside to get the bread from the delivery woman at 8:30 or so, I was surprised that it felt almost as warm outdoors as inside the house. And then it rained lightly for a good part of the day. It's raining again this morning. 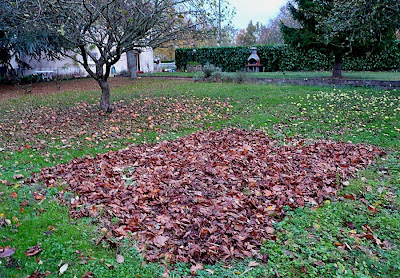 Four square plots plus one long row make up the garden.
Gardening on more than a small scale is one of those things you have the time and energy to do when you are retired. It's not just a weekend activity. There's always something to do out there, and you have to get it done when it's not raining, which means you don't have a free hand when it comes to choosing your workdays. You can't count on sunny, dry weekends, that's for sure. 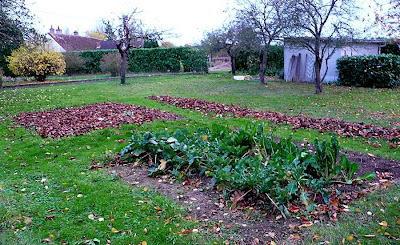 The greens are enjoying mild weather and still growing.
As you can see, the chard and collard plants are enjoying this weather. They are greener than ever, and growing nicely. Last year my collard plants stood up to the cold all winter long. I havested them in early spring, because I was ready to plant other crops. But that tells you how mild our winters are here in Saint-Aignan.
Posted by Ken Broadhurst at 07:26