If you've ever bought a slice of flan in a French pâtisserie, or pastry shop, you'll know it's about the simplest confection in the place, and the least expensive. It's basically a thickened egg custard that, when cold, is stiff enough to hold its shape. You can hold a piece in your hand to eat it.

A French flan is not at all the same thing as a Mexican flan, which is France would be called a crème caramel or crème renversée. The Mexican dessert has to be eaten with a spoon. It's really good, too, and the crème caramel is an old-fashioned classic in France. 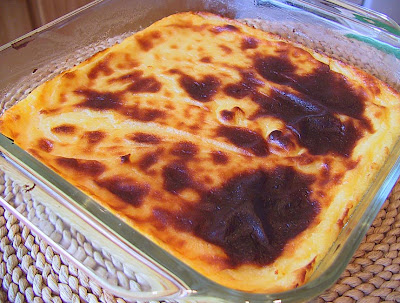 Flan pâtissier right out of the oven

Flan seems like the simplest of desserts, but in my experience it's not that easy to make a good one. It's easier to cook than a crème caramel, because the custard mixture contains not only eggs but also a starch — flour or cornstarch — and so doesn't need to be baked in a water bath. What's hard is getting the mixture of starch, milk, and egg right so that it sets up as smooth and creamy as you want it.

Sometimes a flan is baked in a pie shell, and sometimes it's not. All the bakeries around Saint-Aignan, including the little one in our village, sell flans by the slice. Often they are plain, but sometimes they contain fruit like raisins or dried apricots. One of the best-known kinds of flan is called a clafoutis. It's usually made with cherries, but can be made with other fresh fruit — pears, apples, plums, or grapes — as well. 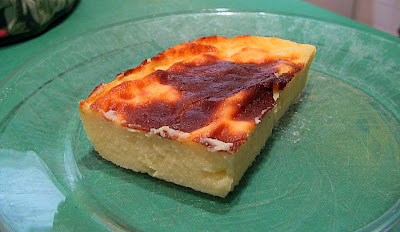 A slice of flan for dessert

A quiche is a kind of savory flan. The nice, delicate lemon tart — tarte au citron — that Walt makes is also a flan.

The flan that's made using flour in the egg-and-milk mixture is called Flan à la parisienne. The version made with cornstarch is called Flan pâtissier. I've made the flour version many times but I've never been satisfied with the consistency. It's kind of pasty.

Here's a recipe using cornstarch, which is much smoother and creamier. « C'est plus fin », you would say in French — it's more delicate, more refined. And it's easy to do. To make it even more delicate, you could put in only egg yolks instead of whole eggs, but then you might have to eat it with a spoon. 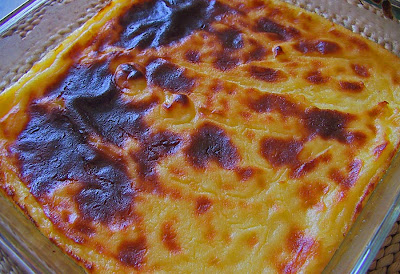 Combine the milk, the water, half the sugar, and the vanilla in a saucepan and bring it to the boil over medium high heat.

Mix the rest of the sugar with the cornstarch in a big bowl. Add the eggs and beat the mixture until it is smooth.

Slowly pour the boiling milk into the egg mixture, stirring constantly, to make the custard. When it's well blended, pour the custard back into the saucepan and bring it to the boil again on medium heat. That should take one or two minutes.

Pour the custard into a pie shell or a buttered baking dish and cook it for 30 to 40 minutes, until it's browned on top. Cool completely on a rack before unmolding and serving.

Flan is an interesting word. Mexican Spanish borrowed it from French, I'm sure. Actually, a flan is a disk of metal destined to be made into, for example, a coin. It's what we would call a slug. The reason it's used as the name of a kind of tart is that a flat pie pan is also a disk of metal, and the tart you make in it is disk-shaped too. The word doesn't come from Latin, but from old Frankish — a Germanic language. 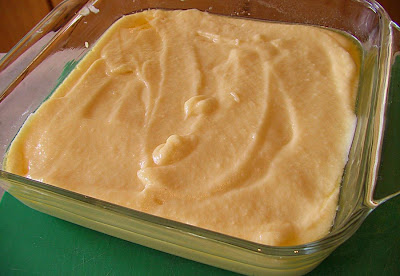 Here's the flan or custard
before it goes in the oven to bake and brown.

It goes on to say that there are savory flans served as hors-d'oeuvre and sweet flans served as dessert, and then sends the reader off to the article about tartes. In other words, I can't find any mention of either Flan pâtissier or Flan à la parisienne in the Larousse. But then it's not the easiest book to find things in. I wish there were a searchable electronic version of it.
Posted by Ken Broadhurst at 07:47