As Walt said in his comment to yesterday's post, he turned out to be none the worse for wear after taking a blow to the face from a wooden pole. Yesterday morning, we managed to completely remove that heavy old wooden ladder from the attic trap door. It was rickety and downright dangerous, held together by baling wire, brittle old screws, and rusty nuts and bolts. 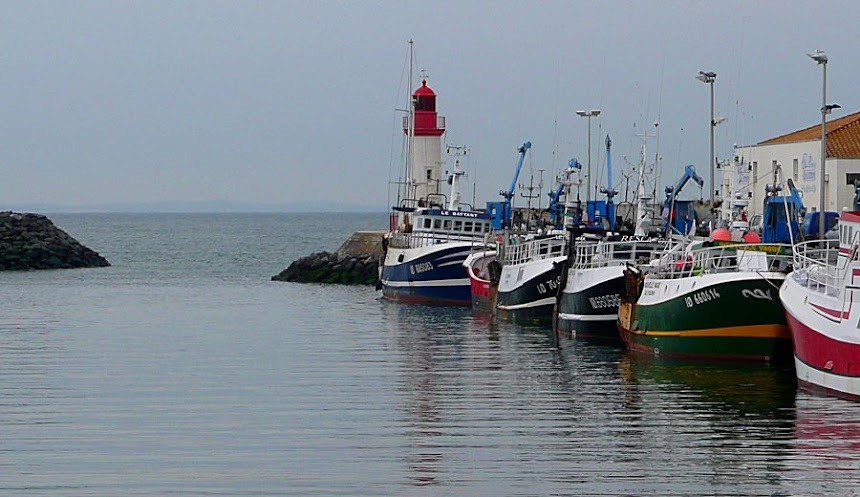 La Cotinière on the Ile d'Oléron. Warning: the pictures
in this post don't have much to do with the text.
We are lucky it didn't fall down on our heads before it did. A complicated set of wires, springs, and pulleys allowed you to pull it down out of the attic and then push it back up again so you could close the trap door from below. The wires kept getting tangled, and one of them finally snapped or came loose the other day, which is why it came crashing down instead of folding neatly up into the attic. Now we are rid of it completely. 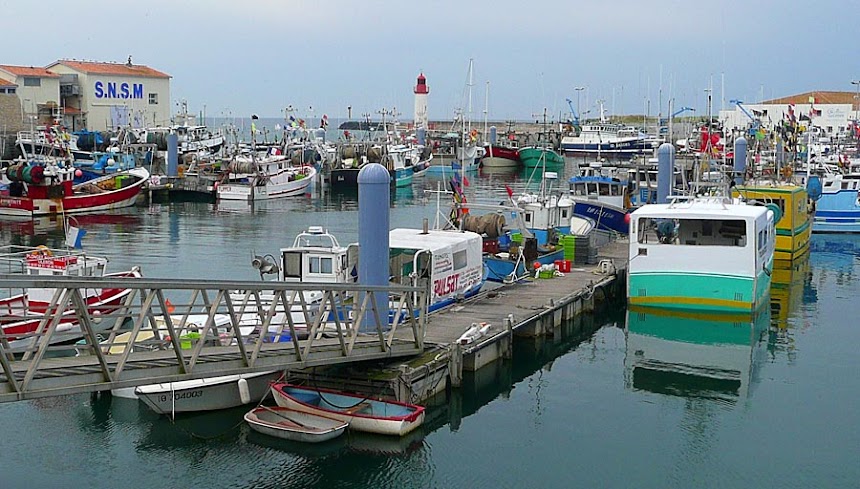 All the boats were in port on May 23 at La Cotinière.
We had a month's worth of rain on Tuesday. That's 50 mm (2 in.) in the space of a few hours. Yesterday I was over in Noyers-sur-Cher at the Bricomarché hardware store and I overheard several people discussing their flooded basements and gardens. One man was saying that muddy water came up through the drain pipes into his bathtub, so high had the water risen outside and in the cellar. We are lucky to live on high ground at La Renaudière. 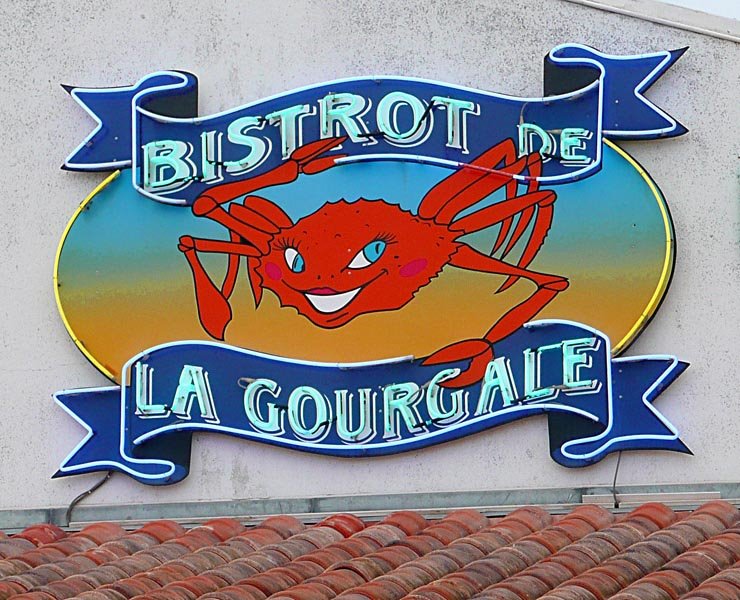 A restaurant sign in La Cotinière
The water level in the Cher is very high. A news report yesterday on France2 television said their were a lot of flooded houses about an hour south of Saint-Aignan in the town of Le Blanc, on the Creuse River. They showed some people who were more or less trapped on the second floor of their houses because the water was three feet deep in the ground floor rooms. 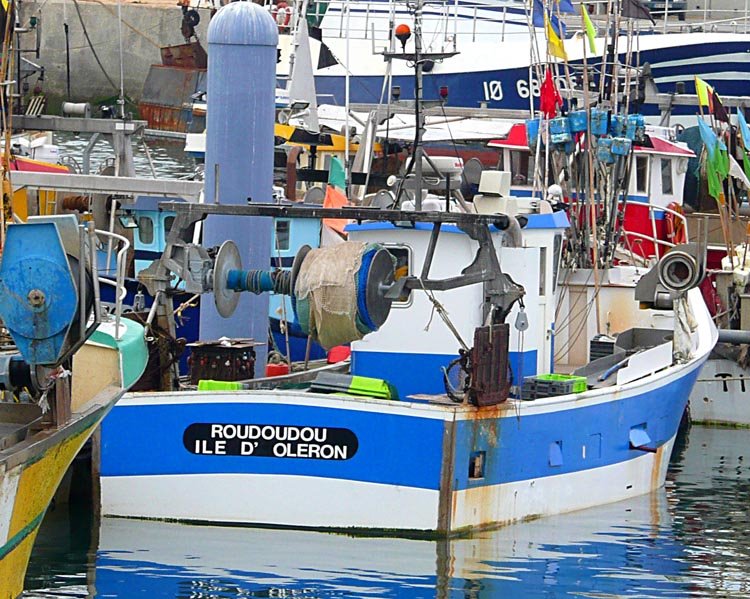 Nice name: Roudoudou
Yesterday, after a lazy afternoon and then a long walk with Callie, I had dinner with BettyAnn and her friend Danielle down in Saint-Aignan at a restaurant called Le Crêpiot. I enjoyed it, and I think the two the them did too. We stayed at the table for three hours and ended up closing the place down. The owners shook our hands as we left and wished us a good stay in Saint-Aignan. They were probably wondering if we were ever going to decamp. 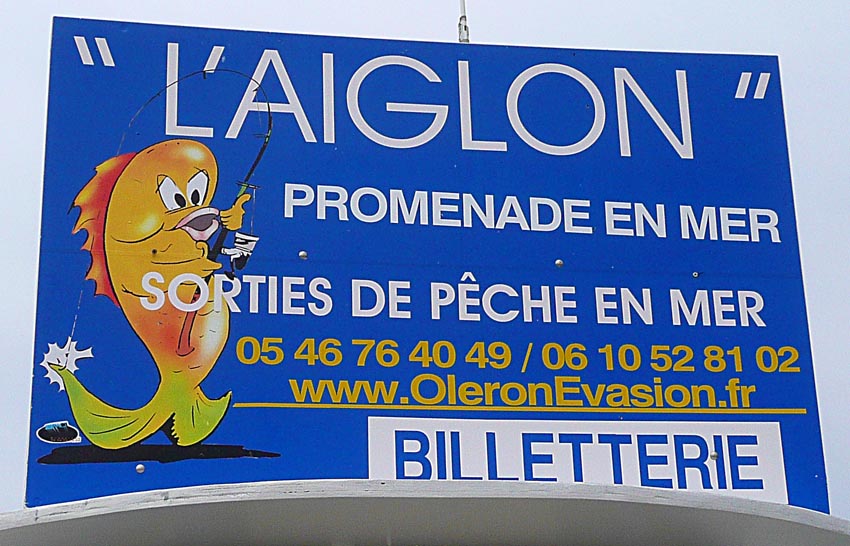 Take a sea cruise on the Aiglon at La Cotinière...
Walt is in Paris and will be going to Roland Garros with Cheryl today to see some tennis matches. At least they hope to see some matches. Weather reports say the Paris area may get as much as an inch of rain over the course of the day. That's bad luck for Walt and Cheryl. The last time we went to the French Open tennis tournament, in 2006, the same thing happened, though the matches weren't completely cancelled and we saw a couple. 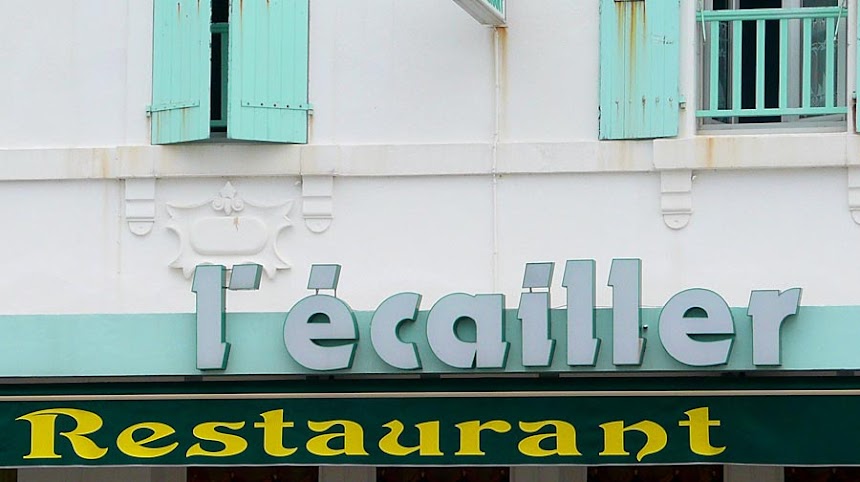 Another restaurant in La Cotinière. An écailler is somebody
who shucks and sells oysters and clams for a living.
By the way, reports are that many French fishing ports are still closed because of commercial fishermen's protests over the high price of diesel fuel. Protests have spilled over into Spain and some of the Northern European countries. The only thing the government can do to lower fuel prices is reduce taxes, and with the huge budget deficits France faces I'm not convinced that's a good plan. We all have to face up to the end of the Age of Cheap Petroleum, don't you think? 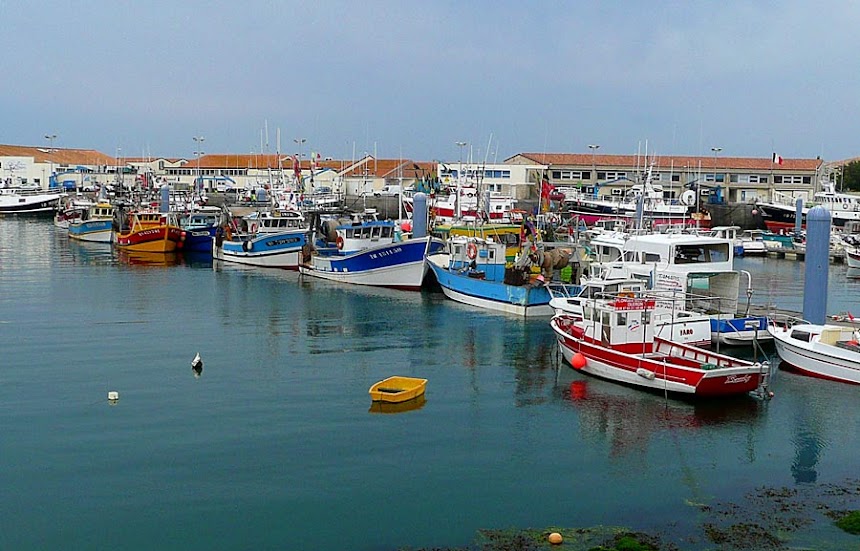 Another view of the harbor at La Cotinière
The pictures in this post are ones that I took in the fishing port of La Cotinière on the Ile d'Oléron a week ago. Notice how many boats were in port on a Friday morning — all of them, actually, since no fishermen were going out to sea that day.
Posted by Ken Broadhurst at 07:29