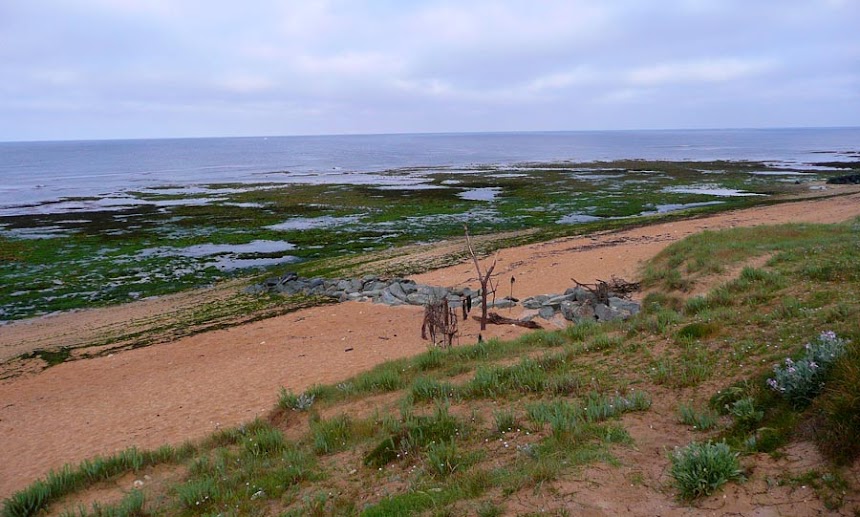 The beach on the western side of the Ile d'Oléron at low tide
You're used to seeing vineyards on this blog. Now it's beaches. The same beach, actually, and it's on the Ile d'Oléron. When I walked back to the beach at La Menounière with the dog two Sundays ago, I was surprised to see what it looked like at low tide. 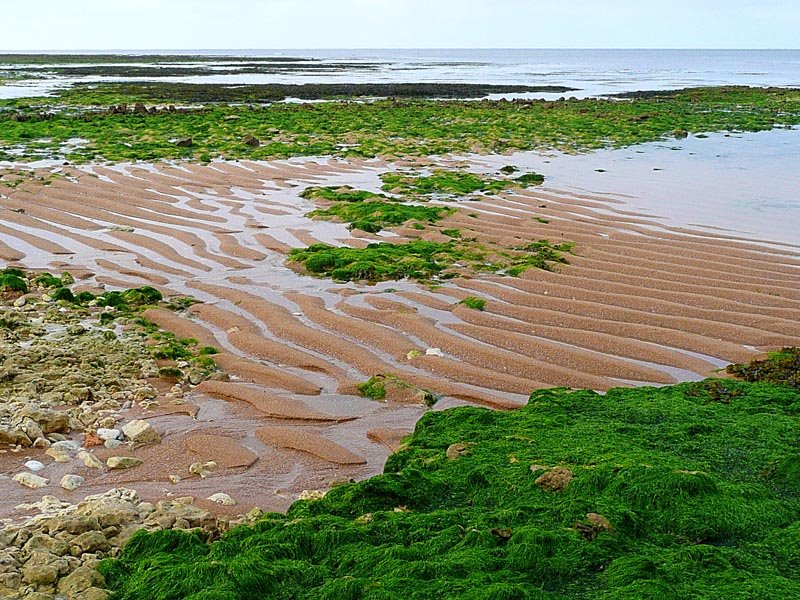 Tidal patterns in the sand
So the bottom is sandy only in spots. In others, it's covered with fairly smooth white rock. You couldn't call it "rocks." It seemed more like a very rough floor, covered with limpets, periwinkles (little black sea snails called bigorneaux in French), and bright green seaweed. 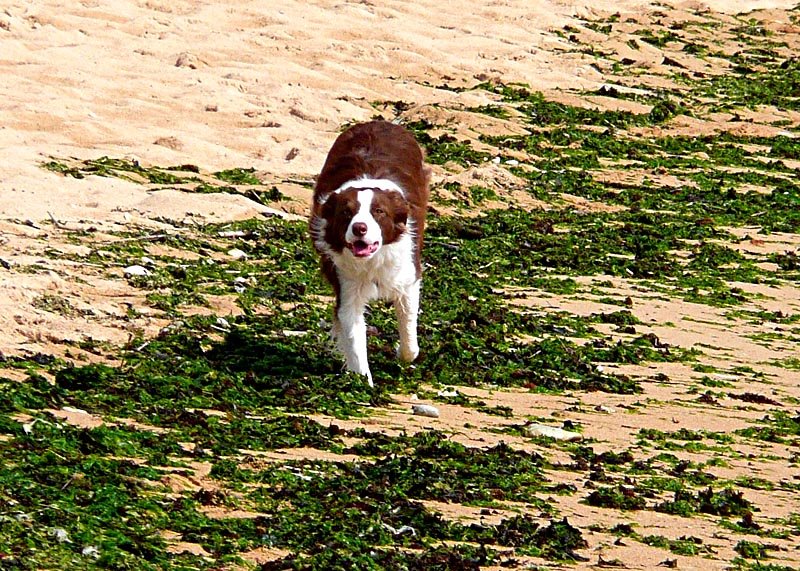 Callie running through the seaweed on the beach
Callie loved it. She was in discovery mode. She's not afraid of water, or averse to plunging in if she gets a chance. She also tasted seawater to see if it was good to drink. It wasn't. She went swimming twice during the week, but never when I was there. Both times, it was Walt who had taken her out. 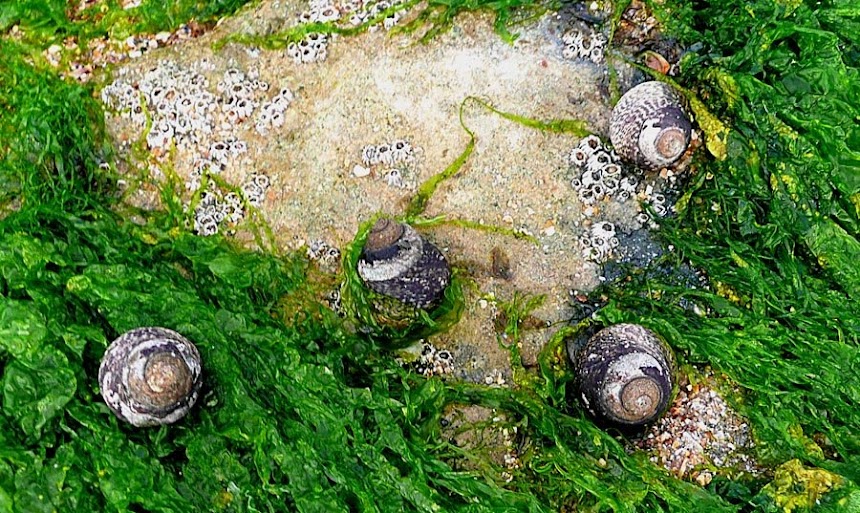 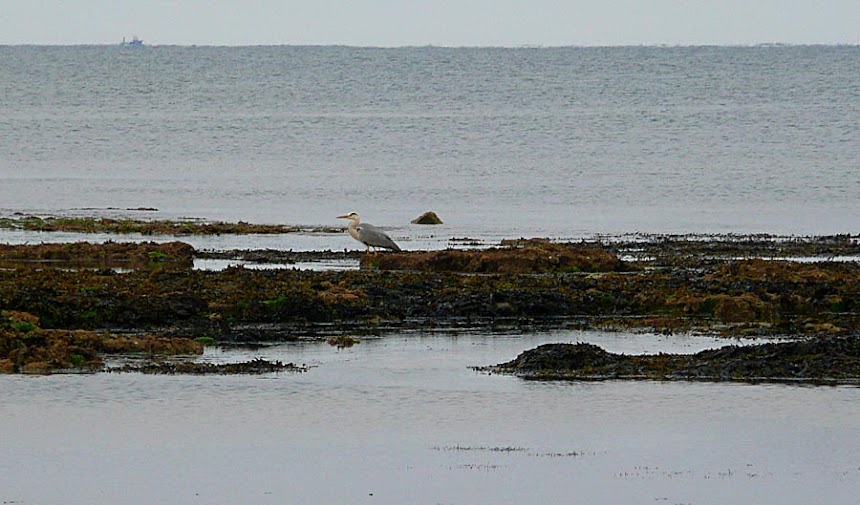 A gray heron — un héron cendré — feeding at the beach
Meanwhile, the commercial fishermen were still on strike. We were staying just a mile or two from the island's main fishing port, called La Cotinière. It has a typical and picturesque little boat harbor, protected by high stone walls from the ocean waves. But no boats were going out fishing, and the little fish shops and stands in the village were closed. There was no fish to sell. 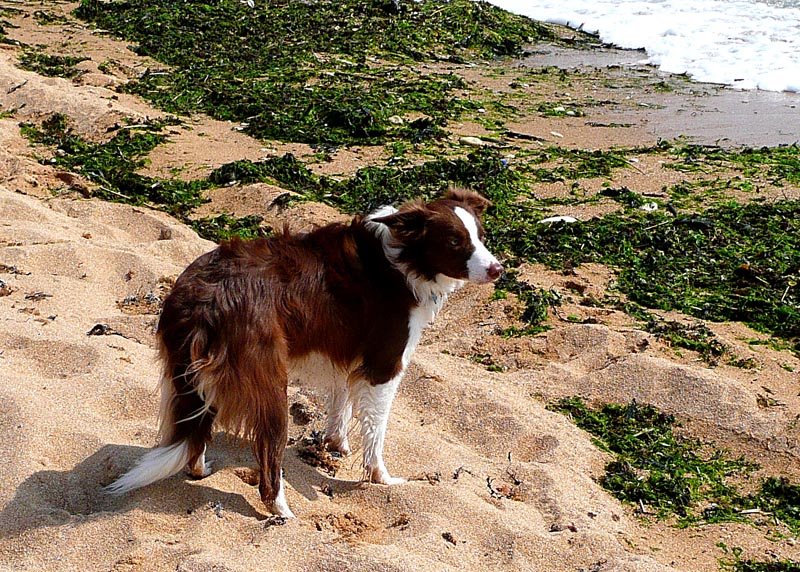 Callie at the beach on Oléron
Callie made the car trip without throwing up on the back seat, by the way. That was a relief. She does not like riding in the car, but I think she's getting better at it.

Yesterday I found this really interesting and comprehensive site about the Ile d'Oléron. It's in French. Some pages describe and show pictures of all the fish and shellfish that live in the waters around the island. The site also has an extensive dictionary describing the local Oléron patois or dialect.
Posted by Ken Broadhurst at 06:46