Another wall sign, this one in the town of Mennetou-sur-Cher, about 25 miles east of Saint-Aignan, on the river. It advertises Simca automobiles and a garage/dealer in the nearby town of Romorantin-Lanthenay. Simcas are no longer made, and the garage is surely just a local memory. 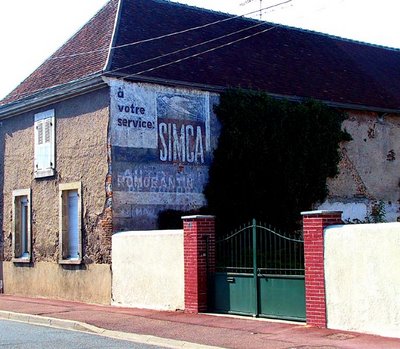 Wall-advertising in Mennetou-sur-Cher, along the Nationale 76
Personally, I have a long history with Simcas, even though I don't think I've ever driven one. I don't even know if I've ever been a passenger in one. Production of the cars ceased in late 1970s or early 1980s, so this Simca-fascination of mine goes back quite some time.

In 1972-73, I lived in the city of Rouen in Normandy and worked as an English-language teaching assistant in a high school there. The job was part-time and the pay was low, so I didn't have a car that year. I also didn't need a car because I lived in the middle of the old city and could walk to work and to nearby shopping areas.

It was just as well, because I couldn't have afforded a car. I had sold my 1966 Ford Fairlane (I shudder to think I drove such a thing — it was a college graduation present from my father). when I left the States that summer of 1972. 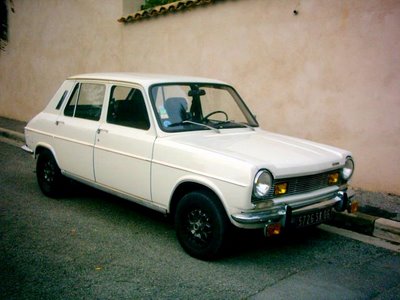 I really wanted my next car in America to be a Simca 1100 hatchback.
I was fascinated with French cars and European cars in general. They seemed so much more sensible to me than the big "boats" so many Americans drove around in at the time. The Citroën 2CV (la Deux-Chevaux) and the Renault 4L were two of the most distinctive small cars in France back then. There were plenty of other models, too, but those two were really the people's cars of the time. You still see quite a few of each on the roads out here in the countryside.

And there was also the Simca 1100. It was an innovative model because it was one of the first hatchback cars, unless I'm mistaken. The 2CV was a four-dour sedan, and the 4L was a tiny station wagon. The hatchback was a new concept in those days. Hatchback models are still very popular in Europe, though they are kind out of fashion in the U.S. My little Peugeot 206, which is a 2001 model, is a hatchback. It's very practical. 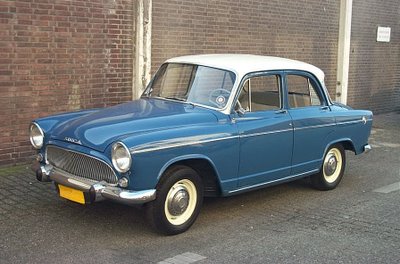 A 1961 Simca Aronde. The Aronde was introduced in the early 1950s.
This is the Simca model I remember seeing in North Carolina back then.
Thanks to Wikipedia for the photo.
Simca had some very successful cars in France in the 1950s, and I even remember that somebody in my home town in North Carolina had one in the late '50s or early '60s. At that time, there were still U.S. military bases in France, and I'm sure it was some of the returning military personnel who brought their European cars home with them. We learned to recognize Simcas and Renault Dauphines, as well as English Fords, Hillmans, and Vauxhalls, a few Fiats, and, of course, VW Beetles.

The Simca 1100 was a new model in 1967. It had front-wheel drive and independent suspension all-around. In addition to the hatchback, there was a station wagon. In all, about 2.2 million Simca 1100s were built. 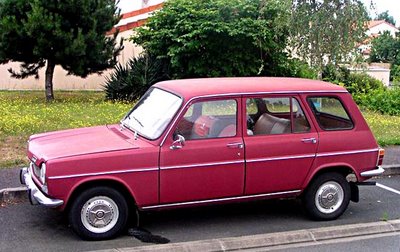 A Simca 1100 station wagon that is currently for sale
Anyway, I really wanted a Simca. Chrysler had taken a controlling interest in the Simca company in the 1960s, and owned it outright by the early 1970s. Chrysler France kept the Simca brand name. I hoped that when I returned to the U.S. from Normandy in 1973 I would be able to buy myself a Simca 1100 from a Chrysler dealer. I was going to need a car in the U.S. 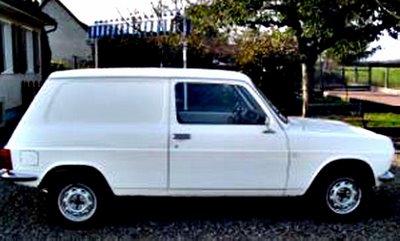 This one is a Simca 1100 utility vehicle. It's for sale too.
That wasn't to be, however. Chrysler didn't sell them in the U.S. I ended up buying a little German Opel 1900 from a Buick dealer in North Carolina. My father co-signed the loan for me, and the Buick dealer was where he bought his cars. He was scandalized that I would pay good money for such a little putt-putt car. 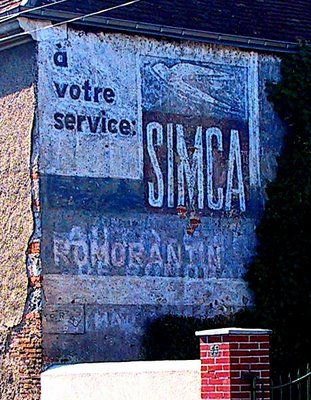 A close-up of the old Simca sign
The brand-new light-blue Opel 1900 (called an Opel Ascona in Europe), with an AM radio, a heater, and a manual transmission, cost about $3,300. Such a deal! It didn't have air conditioning, FM radio, electric windows, or even power steering or power brakes. But it had four doors and a big trunk. It got good gas mileage. It was the best I could do.

I know I have a picture of that old Opel somewhere. I drove it until 1979, when I sold it to return to France one more time. The Opel got me back and forth from North Carolina to Lakeland, Florida, and Champaign, Illinois, many times. I don't remember how many miles I put on it, but I bet it was a lot. I think I sold it for $600 in August 1979.

So no Simca for me... not back then. The only Simca 1100 I've noticed since I've been in France this time is an orange one that I spotted last year down in Châtillon-sur-Indre. I was surprised to see one that was still, apparently, road-worthy.

The Simca wall-advertising I started this posting with led me to start looking around on the Web to see if there were any available. It turns out that there are a lot of classic Simca 1100 pictures on this site, and more at this one. Wikipedia has a good history of the brand (in English or in French). 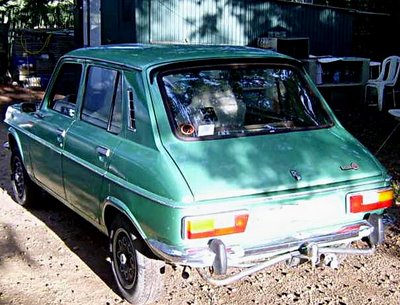 Another 1100 currently for sale (unless it's already been sold)
And if you want to buy a Simca 1100 today, there are plenty of ads here. All the pictures of 1100s in this posting are ones I got from these ads (can't imagine anybody minding some free advertising). 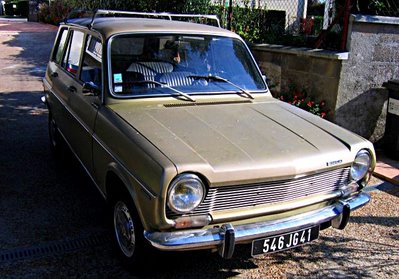 This is the Simca 1100 station wagon that a man in Blois is trying
to sell. Sometimes we think having a second car would come in handy,
especially a station wagon. The guy wants 1200 euros for this one.
But... but... now I've learned that one is for sale in Blois. What is the attraction of these old cars? I'm very tempted to call the man who's selling it. I'm old enough to know better. I wonder if the thing would even make the 25-mile trip from Blois to Saint-Aignan without incident.

If I knew anything about working on car motors, having a classic car would make more sense. To be continued...