Financiers is a funny name for little almond-flavored sweet cakes. Here's all I know about the origin of the term: there's a theory that they are often made in Switzerland (think bankers) and that they are shaped like gold bars.

The ones I make are not necessarily shaped like that. I don't have a special pan to make them in. But since we arrived in France in 2003, I've been enjoying financiers a couple of times a year. They are delicious. I want to share the recipe.

Financiers have two distinctive features compared to other cakes. They are made with egg whites only — no yolk (ha ha ha). And the dry ingredients include equal amounts of flour and almond powder. 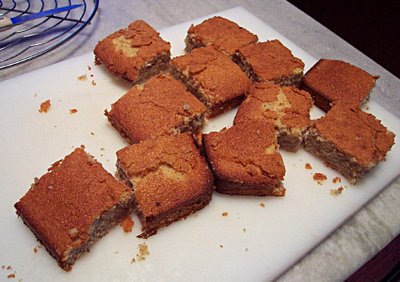 Financiers à ma façon
I end up with a lot of egg whites chez moi because I use the yolks to make mayonnaise and to enrich sauces, cakes, and other preparations. Today, for example, I'm making a meat pie called a tourte lorraine that calls for three egg yolks to bind and set the meat filling.

What can you do with the egg whites? You can put them in a plastic container in the freezer. I put them in a container big enough so that I can just keep adding egg whites to it over time, until I have enough (eight, in this case) to make a good batch of financiers. 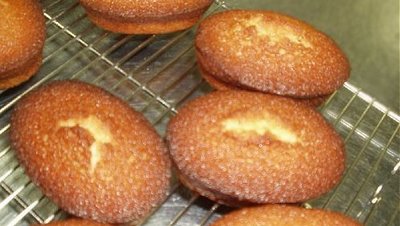 Evidently, the little cakes were originally oval-shaped. Mine aren't.
Here's the recipe I used the other day when I realized I had eight egg whites in the freezer. My translated version follows. You might notice that I double the Marmiton recipe. Remember that French recipes require that you use a kitchen scale to measure out the ingredients.

Butter the pan you plan to cook the cake or cakes in. (You're supposed to make individual cakes, but I use a 9" x 9" cake pan and then cut the cake into squares after it's cooked and cooled.)

Mix together the almond powder, flour, and sugar. (For the sake of precision, I specify the weights down to the half-ounce, but I'm sure it would be fine to put in 4 oz. each of flour and almond powder and either 10 or 11 oz. of sugar.)

Beat the egg whites with a pinch of salt until they are pretty stiff and dry. Melt the butter and add it to the dry ingredients along with the egg whites. Stir it all together and add the vanilla and (optional) almond extract.

Pour the batter into a pan and cook it until it is golden and set. Test it with a toothpick or knife to make sure it's done. Cut the cake into squares after it's cooled or, if you've made individual cakes, you can take them out of the pan immediately.

If you want to make the financiers in a muffin tin, don't put much batter into each cup. The cakes shouldn't be more than about an inch thick. 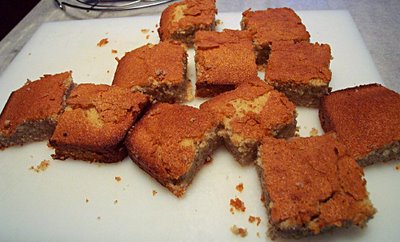 One more picture of my financier squares
Posted by Ken Broadhurst at 07:57