How to make a Daube de bœuf

The daube turned out just right. It marinated for just under 24 hours, and then it cooked for about 5 hours in a 300ºF/160ºC oven.

The first step was to cut up a couple of carrots, a couple of onions, three or four shallots, and three garlic cloves for the marinade. I bought the meat already cut up and it didn't even need trimming. If I were making this in the U.S., I would use a chuck roast, I think. 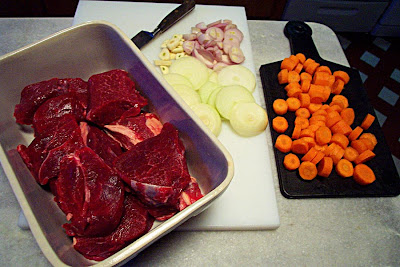 The ingredients for the marinade are ready.

Oh, and the recipe I was more or less following called for a barquette de lardons fumés — that would be 7 or 8 oz. (200 g) of smoked bacon. If you can get slab bacon, that would be better than sliced, but the bacon is also optional in a daube. 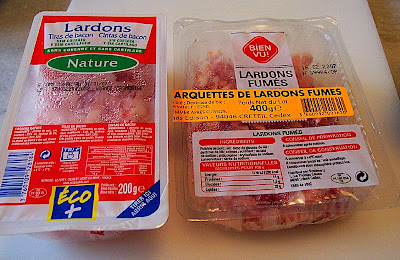 Supermarkets sell packages of either plain (nature) or smoked lardons

I usually like to buy a slab of what we would call "bacon" in the U.S. — smoked streaky bacon, called poitrine fumée or lard fumé in France — and cut it into lardons myself. But this time I took the solution de facilité and bought a package of pre-cut lardons at the supermarket. 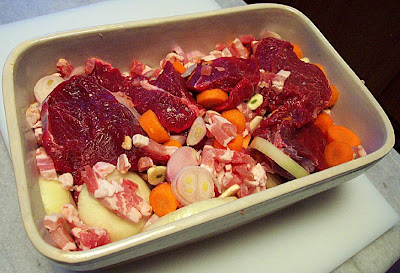 The recipe I was using called for using a lot of parsley in the marinade, but I didn't remember to buy any parsley. So I used dried thyme, bay leaves, hot red paprika, black peppercorns, and whole allspice berries in mine. 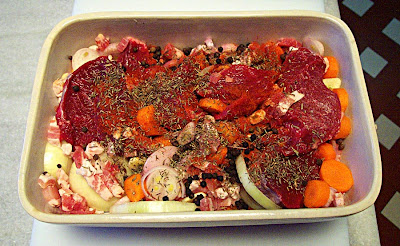 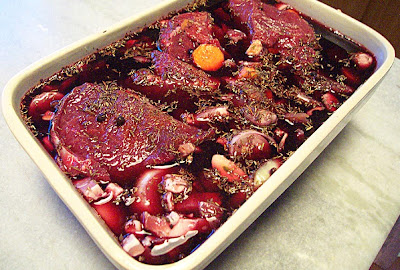 ...which was a whole bottle of red.

I used a bottle of our local Cabernet Franc red wine for the marinade. Any full-bodied, dry red wine would do the job.

In hindsight, I was sorry that I had put the whole peppercorns and allspice berries in the marinade, because 24 hours later I found myself painstakingly removing them all by hand. If I hadn't put them in, I would have saved myself a lot of work. I guess I could have cooked the whole berries in the dish, but we would have ended up picking them out at the table...

I ended up separating the carrots from the lardons and onions etc., but I don't think that was really necessary either. Next time I'll use ground pepper and allspice and skip this step altogether. 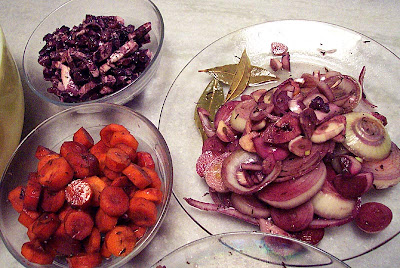 Remove the beef chunks and pour the marinade through a strainer. 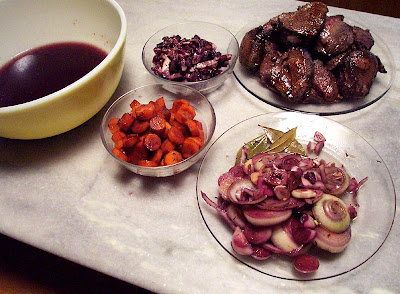 Sauté the pieces of beef in some oil or butter to brown them.

After you brown the beef, cook the onions, bacon, and carrots lightly in the same pan, just to soften them. You can also deglaze the pan with a little of the wine that everything marinated in. Then combine everything in a big baking dish with the calf's or pig's foot and pour all the liquid over it. 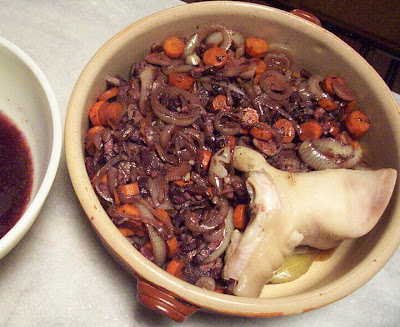 The only thing left to do is pour the wine over it all.
Then it's ready for the oven, at about 300ºF.

Again, I think the foot is optional, but using it does give the recipe an air of authenticity. I turned out to have a pig's foot in the freezer, so I used that. Before I put it in the dish, I put it in a big pot of cold water and brought it to the boil so that the pig's foot was blanched. One recipe for daube that I read said to do that, so I did.

Add some salt if you want to, but carefully because the bacon is salty and the pig's or veal's foot will also be salty. There was no salt in the marinade except what came out of the bacon. I'd say let the dish cook without added salt for a couple of hours, and then taste the sauce and add salt as necessary to taste. 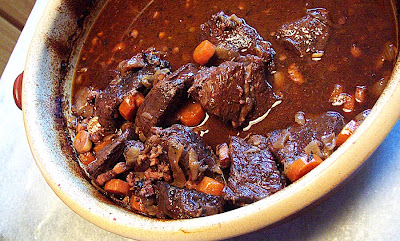 The daube de bœuf after two hours in the oven

Cover the dish and let the daube cook for at least three hours and as many as five. If it looks like it's drying out, add a little water as needed.

When I tasted mine in mid-cooking, I thought the sauce was a little salty and a little spicy (from the paprika). I wondered what I could do to tone it down without watering it down to much. I ended up adding a couple of tablespoons of ... honey ... to the sauce. You couldn't taste the honey in the final dish, but the sauce turned out to be excellent. 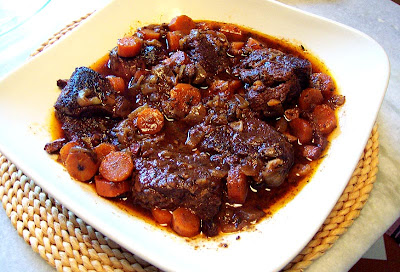 While I was making the daube, Walt was making a vegetable terrine which he has reported on in his blog. This last photo shows how it all looked just before we took it to the table. The daube sauce was excellent with the vegetables. 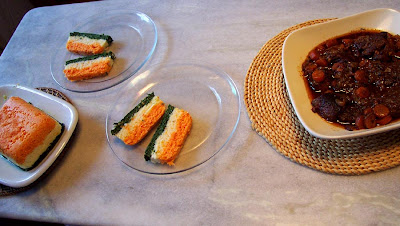