Along with escarole & beet salad, I made shepherd's pie — hachis parmentier in French — this past weekend, using leftover lamb, some tiny lardons cut from good poitrine fumée (a.k.a. lard) that I bought chez Doudouille at the Saint-Aignan market, and lots of aromatic vegetables. 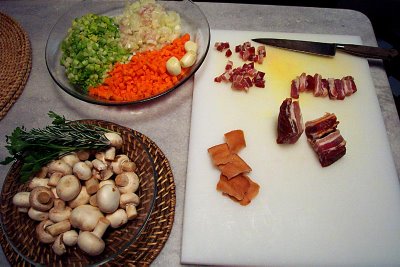 The light brown squares on the cutting board are the rind of the pork
bacon, the couenne. Cook it with the meat and vegetables because
it gives gelatine and flavor to the mixture. Then remove it, along with
any bay leaves you used, before you put the mixture in the baking pan(s).
I spent a lot of time cutting up the vegetables and the meat. I used carrots, onions, garlic, celery, mushrooms, and herbs. I diced all those up very finely. Except the garlic, which I grated. I also chopped up the lamb into very small pieces. That's how I spent my Sunday morning. Sometimes I think I'm crazy (bite your tongue!), but the ends justify the means, I guess. Or the time spent. 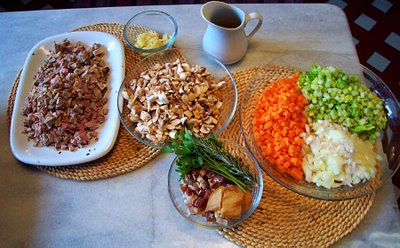 L. to r., lamb, garlic, mushrooms, rosemary, parsley, lardons, carrots, celery,
& onions. In the little white pitcher, the cooking juices from the leg of lamb.
Whenever I start thinking I ought to be able to find something more valuable to do with my time, I stop myself and say "no, food is about the most important thing there is." For your health, no less. And then I have always thought it was a good idea to make a pleasure out of something that is absolutely a necessity. Enjoy cooking. Enjoy eating. Try to exercise self-control at eating time. Eat a little bit of everything. 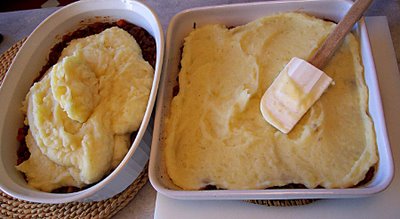 After cooking all the meat and vegetables, moistened with the lamb drippings,
you put that mixture into pans and spread mashed potatoes over the top.
Then you bake it all in a hot oven.
Also, in the back of my mind, is the old saw that says "Waste not, want not." I can't stand to throw food out. I had not only the leftover lamb (and its jus) but celery and carrots in the refrigerator that needed to be used. Another old saw: Use it or lose it. Cook it or toss it. 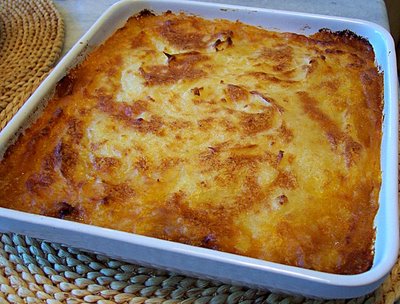 Hot, golden-brown hachis parmentier ready to serve
I went out and bought mushrooms and potatoes and lard (what we would call smoked slab bacon). Buying the lard was really just an excuse to go to the market and talk to Mme Doudouille for a few minutes. I hadn't seen her since before our U.S. trip, back in September.

Speaking of potatoes, on the cooking shows we watch on Cuisine TV, a French channel, the various chefs and home cooking experts always talk about a potato variety called bintje (pronounced beentch). I've been feeling deprived for about 3 years now, because I have never been able to find bintje potatoes in our Loire Valley markets or supermarkets. 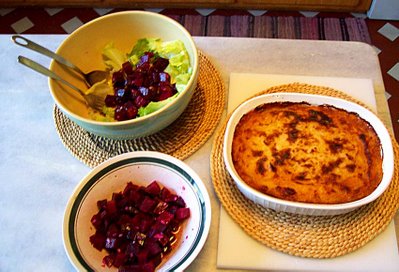 Here's the meat-and-potato pie alongside some beets
I finally did a Google search on the word bintje. It turns out that the variety of potatoes I do find in all our markets, agata, is the same thing. The bintje potato was developed in the Netherlands in the early 20th century, and I think it is grown in Belgium and in northern France. It's good for making frites, purées, and potages (soups) because its flesh is mealy or farineuse.

The agata potato was also developed in the Netherlands, but later, and Wikipedia's article on potatoes in French says it closely resembles the bintje. I used agatas to make the mashed potatoes for the shepherd's pie. The waxy red franceline potatoes that I already had wouldn't have made a good purée at all. I tried mashing them once and ended up with a pot of what could only be called glue (un pot de colle !).

It's interesting and culturally or culinarily significant, I think, that Wikipedia's English-language article on potatoes doesn't include any information about different varieties at all. The French article lists and describes thirty-seven, if I counted right.