It's been raining now for at least a week. Most of it is not heavy rain, but it is persistent. And there are moments when it comes down pretty good. 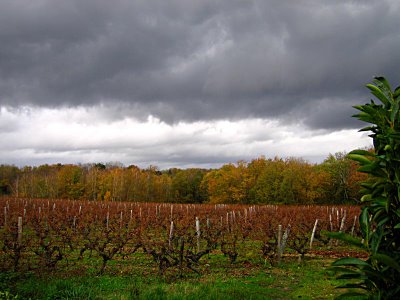 The view out the back gate at 10:45 a.m. on November 25, 2006
Last night I went to bed believing it was going to be windy and rainy all night, but I'm up early today and there's no sign of rain. The wind is not blowing.

Here's the 6:30 a.m. radar map for France. It looks like the heavy rains are still west and north of us. But there's a big blob to the south that might be moving this way. I hope to go to the farmers' market in Saint-Aignan this morning, but not if it starts raining. In that case, the Intermarché supermarket will have to do. 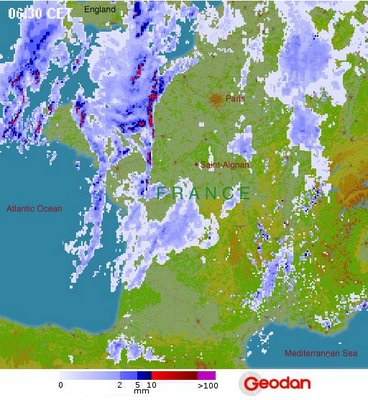 The good news in all this is that the temperatures are very mild. But all the rain means the garden and yard are not yet cleaned up the way I would like for them to be.

Here's a little video that I shot with my Canon S70 digital camera Thursday afternoon, Thanksgiving Day. I used Quicktime Pro to stitch the three clips together and then saved the movie in a compressed AVI format for uploading to Google Video.

The temperature at 7:00 this morning was 17ºC — that's nearly 63ºF. It's too warm, everybody here is saying. It's not good for the trees or the grape vines. We need to have colder weather for a while now. I bet we'll have a cold December. 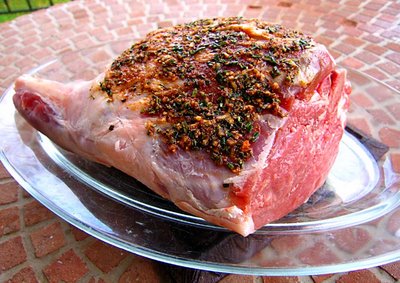 Un gigot raccourci — a shortened leg of lamb from the butcher's 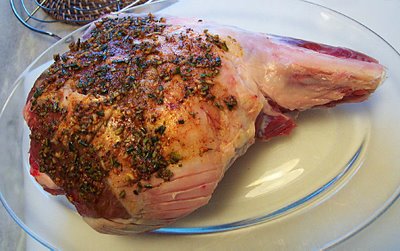 The spice rub is chopped garlic and rosemary
with salt, hot paprika, and black pepper.
It's three hours later. The wind came up but it's still not really raining. I went to the market and talked to Mme Doudouille for a few minutes, and then I went to the supermarket to pick up some things. Tomorrow I'm going to make a hachis parmentier — shepherd's pie — with the rest of our Thanksgiving leg of lamb. 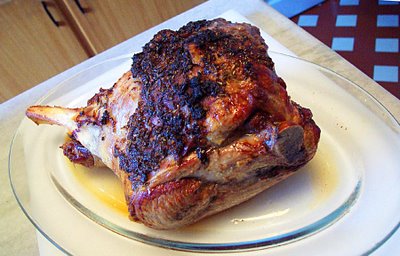 The gigot d'agneau as it came out of the oven... 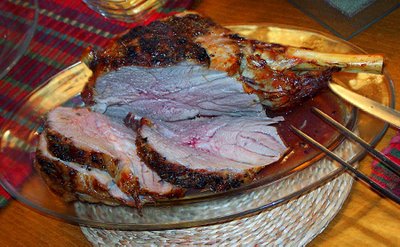 ...and then sliced. It wasn't quite as rare as it might have been.
Among other things I needed from the supermarket was the right kind of potatoes for mashing (variété : agata) and making shepherd's pie. The potatoes I already had (variété : franceline) are great for boiling whole, but they are too waxy for purée. Are they ever good just boiled, though, either in a pot on the stove or in the microwave. I put some coarse salt, some black peppercorns, a couple of garlic cloves, and a fresh bay leaf in the water when I cook them. You wouldn't believe potatoes could taste so good. 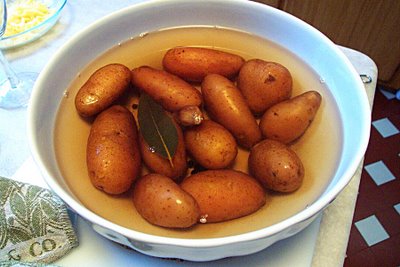 Waxy franceline potatoes cooked in the microwave with aromatics
I also wanted a cooked beet, and Intermarché has the best ones. They're steamed and then packed in a crate in paper. At the supermarket, there's a big fork in the crate along with the beets so that you can pick out the ones you want and drop them into a plastic bag without getting your hands stained all red.

Beets are a classic accompaniment with escarole lettuce, which I bought a few days ago. Escarole is also good as a green salad with garlicky croutons or with lardons, those little chunks of smoked or salted bacon they sell and cook with in France. Okay, now I'm really hungry...
Posted by Ken Broadhurst at 09:55