Often, when when we used to live in windy, foggy San Francisco, I would turn on the Today Show or some such news program in July or August and see reports about how the "whole country" was baking in the latest summer heat wave. People were sweating and suffering, if not dropping like flies, because it was hotter than hell outside. Power brownouts were the order of the day, what with everybody cranking up the air-conditioning to try to keep cool. 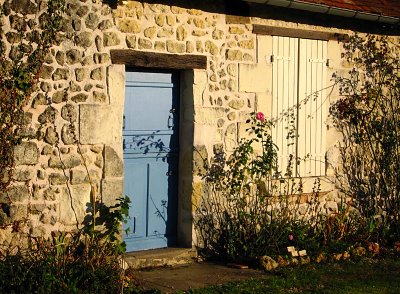 Stone walls and a blue door bathed in November sunshine
And then I would hear the heat come on. With the thermostat set at 65ºF (18ºC), we needed a blast of warm air just to stay comfortable. It was a world turned upside-down. How could we be living so disconnected from the mainstream culture?

In many ways, if not quite literally, San Francisco is a little island at the edge of a continent, with its own distinct climate and culture. That's why so many people trying to escape, or distance themselves, from the mainstream end up living there.

Today I'm feeling similarly disconnected from the surrounding, mainstream culture. It's Thanksgiving. In e-mails, blogs, and the American newspapers I read on the 'net, people are talking about family gatherings, the long holiday weekend, and turkey and pumpkin pie.

Meanwhile, in France, it's just another Thursday. Our French friends, hardly even aware that today is a major holiday in America (and why would they be?), go about their daily routine as usual. Despite my unshakable feeling that everything ought to be closed today, Walt plans to run down to the post office this morning to send off an express mail envelope to England. 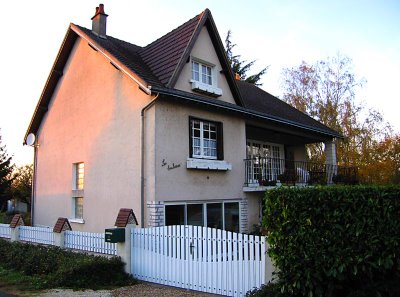 Chez nous à la Renaudière, a November sunset
We don't have any American friends or acquaintences in the area, so we are spending the day at home, just the two of us. Coincidentally, the chilly-but-not-really-cold, blustery, gray, drizzly weather we are having this morning makes me think we might have somehow been magically transported back to San Francisco.

It's not that I miss having a standard American Thanksgiving holiday and dinner. Walt and I decided years ago to forgo the traditional turkey in November in favor of a very French gigot d'agneau with flageolet beans. That's a leg of lamb, which we prefer to turkey anyway. It's our own alternative tradition. The desert will be a pumpkin pie — quand même. We grew the pumpkin in our garden. You can't buy such things as canned pumpkin — or cranberries or cranberry sauce — in the supermarkets here anyway. 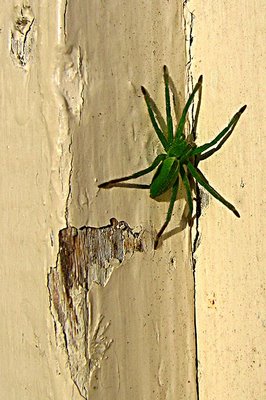 I'm not gloomy about it, so I'm putting some nice sunny pictures of French scenes in this posting to brighten things up. 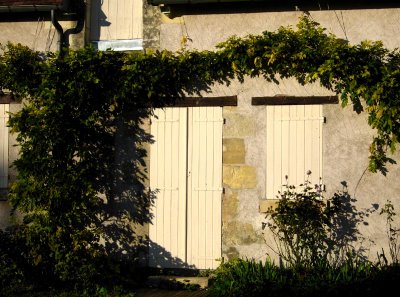 Sun on the shutters
I think the disconnectedness is especially striking to me this year because of circumstances. We just got back from a very busy month visiting our families and a lot of friends, new and old, in the United States. And earlier this year, we were lucky to have a lot of our best friends from California other parts of the U.S. come visit us here in France — I can count up 21 American friends who we had as house guests for some amount of time in 2006.

For the past 17 days that we have been back at La Renaudière, it has been very quiet. We really are in a different world right now. We needed the rest, that's for sure. But when it comes to social interactions, this has been a feast-or-famine year. Speaking of that, it's getting to be time to start cooking that leg of lamb.