Last week we drove our friend Sue to Paris so that she could catch her plane back to California. Her three-month stay was over. We left Saint-Aignan on Tuesday at noontime and took a nice drive up through the pine and birch forests of the Sologne region on our way to the city of Orléans. I just posted a picture of the Orléans "skyline" on my Loire Valley Images photoblog.

We drove into the center of the city and stopped at about 2:00 for a coffee at an outdoor café on the main square. The weather was turning warm. We were surprised how busy, prosperous-looking, and attractive Orléans was, and we plan to go back there soon for a better look around. 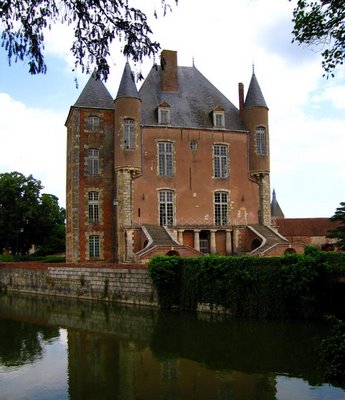 Le château de Bellegarde, with its grand staircases
From Orléans we drove on northeast toward one of my favorite stopping-off points on the road to Paris, the town of Bellegarde. It has a beautiful château and makes a nice place to get out of the car, stretch your legs, and take a few photos on the way to the big city. Our dearly departed dog Collette used to enjoy the stop there when we would travel with her in the car. Of course, she would have enjoyed stopping anywhere, especially if she could sniff around for a few minutes and leave her mark on the place. 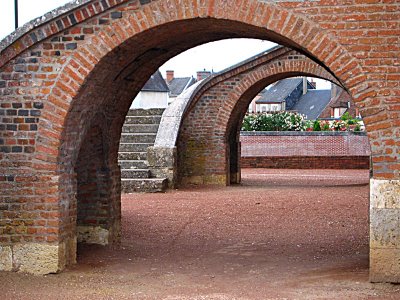 The view under the château stairways at Bellegarde
From Bellegarde we drove on up through Malesherbes and Milly-la-Forêt to get to the autoroute near Fontainebleau and zip on into Paris. Ha ha. "Zipping" is rarely possible on the way into Paris, because traffic is almost always heavy. Tuesday evening was no exception.

We went around Paris on the boulevard périphérique, the ring road, and continued north to Charles de Gaulle airport, where Sue had booked a hotel for the night. Her plane was leaving fairly early the next day. We got to the airport at about 5:45 p.m. It had turned into a long drive — about 5½ hours.

Once we got to the airport, we had no trouble finding the Ibis hotel Sue was staying in. We had printed out directions that were posted on the hotel's web site. But when we drove into the parking lot, around behind a Campanile restaurant, there were several busloads of policemen (des CRS, if that means anything to you) there, and a lot of them were standing around in the lot.

We wondered what was going on. Had there been a terrorist threat? They were blocking our path, and we asked if we could pass. They seemed surprised that we asked, and they got out of the way with a smile and a nod. Thirty minutes later, when we were leaving, they were gone.

We had taken a ticket to get into the hotel parking area, and we ended up parking in an underground garage. To get to the elevator, we had to buzz the hotel reception desk on a little intercom and wait to be let in. We heard a click and the door opened. Up in the lobby, there was a crowd of people, including a lot of Americans, but it wasn't long before Sue was checked in. The hotel employees spoke English.

Then we realized we had to pay for parking at a machine in the lobby before we could get the car out of the garage. The problem was that we had left the parking ticket in the car. And you couldn't get the elevator to take you back down into the garage unless you were a hotel guest and had a room key (a card actually, and it had to be inserted into a reader in the elevator before the elevator doors would close). So Sue had to accompany Walt to the car.

My job was to find a telephone on which I could call our friend in Paris who was putting us up for the night, and tell him we were running late. Traffic going back into the city, we had noticed, was very heavy, so we didn't know what time we would get to his place. There was no phone in the Ibis lobby that accepted phone cards, and I had no change. So I had to go out and walk over to a different hotel before I could find a usable phone. It all worked out, and our friend said he would just wait for us and then we would go to dinner.

When I got back to the Ibis lobby, Walt was trying to pay for parking. It cost just 60 cents (eurocents, of course) for the first hour. But the machine wouldn't give change, and Walt had only a one-euro coin, which was returned when he tried to pay. I said he should try paying with his French ATM card, which often works at parking garage pay stations. He inserted the bank card, he saw an error message on a little screen, and the card failed to reappear. Now what? No change, no bank card, no way to get the car out. This was turning into a hassle.

The hotel employee had to go get his supervisor at that point. The supervisor was nice enough about the whole thing but she was obviously stressed out. Well of course you can't pay with your card because it's an American card and it doesn't have a chip on it the way French cards do, she said. But it's not an American card, Walt said, it's a French card. Let me see it, the woman said. Oh. She was surprised to see that it really was a French card. Is it a fake? she said, laughing. She couldn't believe Walt had a French bank card. They deal with a lot of American tourists at this hotel, obviously.

We were starting to think we might have to abandon the car in the Ibis parking garage. There seemed to be no way to get it out, and we joked about that. What was Sartre's play? No Exit, in English; Huis Clos, in French. The situation was definitely feeling a little absurd.

The hotel supervisor suddenly realized that change was the answer. No, not a change in the parking machine technology, just some euro cents. She left with our one-euro coin, disappeared behind the front desk into the office, and before too long she came back with some smaller coins. Voilà! It worked. We were free to go, and so was the car.

Except that there was no way we could ride the elevator back down into the depths of the parking garage because we were not hotel guests and didn't have a key-card.

So again Sue had to accompany us to the car, or at least to the door two or three floors below the lobby that opened into the garage. At that point, rather than let that door close and then have to buzz the front desk to be let back in — who knew if that would work? — we just said au revoir there while Sue held the door open. It was an unceremonious way to cap off her three-month visit to France.
Posted by Ken Broadhurst at 06:54