For those who thought the black-eyed pea cassoulet was a little fatty and rich, how about this idea: braised Belgian endives and poached fish fillets. Belgian endives are a standard and plentiful winter vegetable here in France. In the U.S., the same thing is sold as a luxury product, and is much more expensive. But Belgian endives are so good, I think, that it's worth the high price once in a while.

The Belgian endives I bought at the SuperU market in St-Aignan last week were €1.15/kilo. That's about sixty U.S. cents a pound. I think they cost 5 to 10 times as much in the States. Belgian endives, among other good foods, are why I decided to come live in France.

Anyway, it dawned on me the other day that the way I cook endives, which is to braise them in a little butter, a good amount of lemon juice, with a little white wine and a couple of garlic cloves in the pan, sounds like it would also be a good way to cook fish. 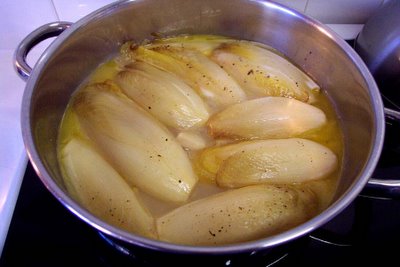 So I cut the endives in half lengthwise, and put them in a pan with some butter (you could use olive oil or sunflower oil too) to brown very slightly on the cut side. Then I poured the juice of one lemon over them, added a glug of dry white wine, two whole peeled garlic cloves, and some pepper and salt. Cover them tightly and let them simmer gently for an hour or more, until they are very tender. Add a little water now and then to keep a quarter-inch of liquid in the bottom of the pan at all times. 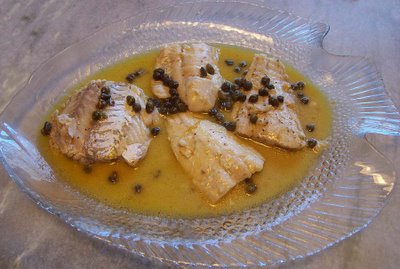 When then endives are done, take them out of the pan and keep them warm. Add a little water or wine if necessary, and mash the cooked garlic cloves into the sauce at this point for more flavor. Place the fish fillets in the warm broth. Let them simmer gently for 10 minutes or so until they're done. Add a few capers to the pan, or some chopped parsley, and serve with the braising liquid and endives. 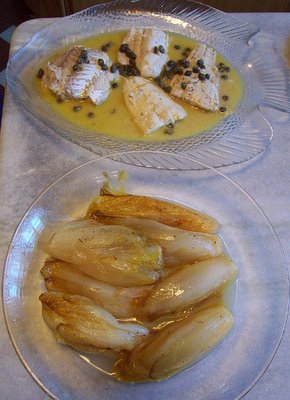 The slightly bitter broth from the endives, softened by the butter, sweetened by the wine, and enhanced by the lemon juice, complements the fish perfectly. I don't remember ever having endives with fish before.
Posted by Ken Broadhurst at 18:02