Walt came back from the supermarket a couple of days ago with a bag of beautiful topinambours — Jerusalem artichokes. What are they? Well, they are the roots of a North American sunflower plant. The scientific hame is Helianthus tuberosus. It's often called a sunchoke, and the root is a tuber that, cooked, tastes like an artichoke heart to some people. The tuber looks sort of like a ginger root.


Why is it named "Jerusalem"? Well, that might be a corruption of an Italian word for sunflowers, which is girasole ("turns with the sun" — tournesol in French). Blame English speakers for the misunderstanding. Another theory is that the Puritans who crossed the Atlantic to settle in the New World believed that their colony would be seen as a "New Jurasalem" and somehow the name came to be applied to this new kind of sunflower they had found. Native Americans knew it was a good food. 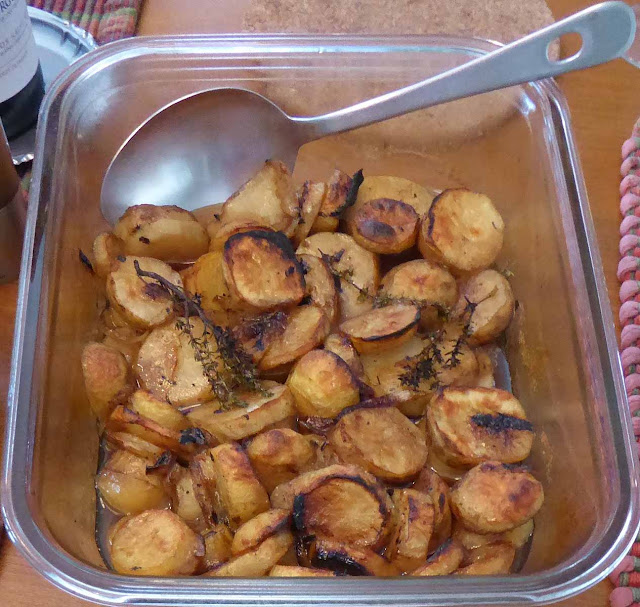 Anyway, I decided to cook them à la boulangère. Potatoes and even roasts like mutton used to be, and still can be, cooked that way. These are dishes that were cooked in bakers' ovens in France in the days before people had ovens in their home kitchens. In the morning or afternoon, when the day's bread had been baked, the oven was still hot. People — whether it was the baker's wife (la boulangère) or neighbors and customers — could take their prepared roasts and vegetables and have them cooked in the hot bread oven.

Here are the topinambours completely cooked. Below, they have just gone into the oven. 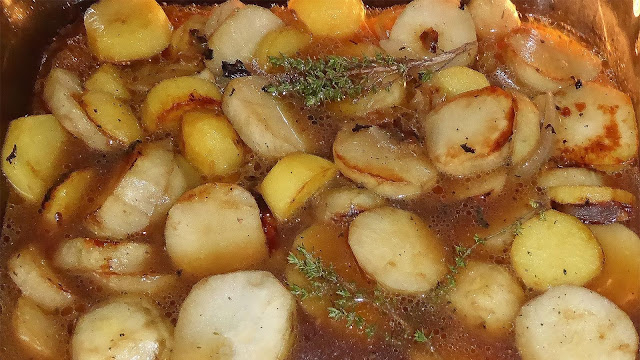 I found a French recipe on the internet after I had the idea to cook the Jerusalem artichokes this way. I've made pommes de terre à la boulangère numerous times over the years, but I had never tried it with topinambours. The author of the recipe I found uses the term « boulangère » as a noun, which was new to me. But why not? 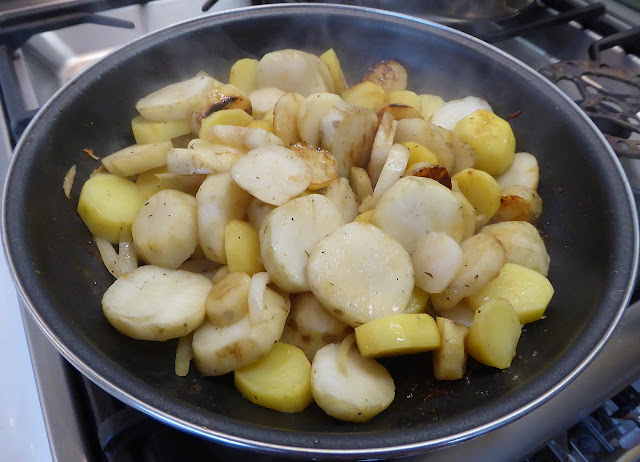 The first thing to do is peel the topinambours (or potatoes, or a combination of the two) and cut them into thick slices. Optionally, slice up an onion and a garlic clove or two as well. Then sauté all the vegetables in a big flying pan to start them cooking and brown them lightly. Use butter, cooking oil, bacon fat, or duck fat as the cooking medium.

When the vegetables are starting to brown and tenderize, dump them into a baking dish and spread them into an even layer. Add a bay leaf and some sprigs of thyme or other herbs. Then pour enough hot broth (chicken, vegetable, etc. — your choice) to not quite cover the layer of "sweated" vegetables. (The boulangère is like a gratin dauphinois made with broth instead of milk.) 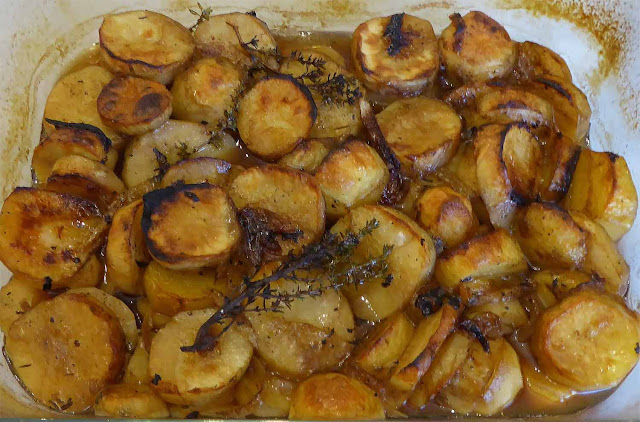 Put the pan, uncovered, in a hot oven and wait 30 minutes or so for most of the liquid to evaporate and for the slices of topinambour or potato to brown as much as you want them to. It's pretty simple. Salt and pepper the boulangère after the broth has evaporated because you don't want it over-seasoned.
Posted by Ken Broadhurst at 07:00