Do you know what the difference between a French baguette classique (also called normale and even more commonly ordinaire) and a French baguette tradition is? We're talking about French bread. More than six billion (6,000,000,000) baguettes are sold in France every year, according to one article I just read. Some 75% of the bread sold in France is of the ordinaire variety. Taste in bread is a very subjective matter. I imagine you can tell which kind is which in the photos below.

Our village baker makes both styles of bread. In fact, the baguette called tradition or tradi has existed officially only since 1993. Back then, nearly all the bread consumed in France was pain ordinaire — actually, the name doesn't do it justice. It could be very good, but it varied a lot from bakery to bakery. Legally, a lot of chemical additives could go into it. Sometimes it was (and still is) made with dough that was "fabricated" in industrial bakeries, frozen, and then delivered to retail bakeries to be cooked on site. Sometimes it was made by the retail baker in his or her own shop, but that was becoming less and less common. 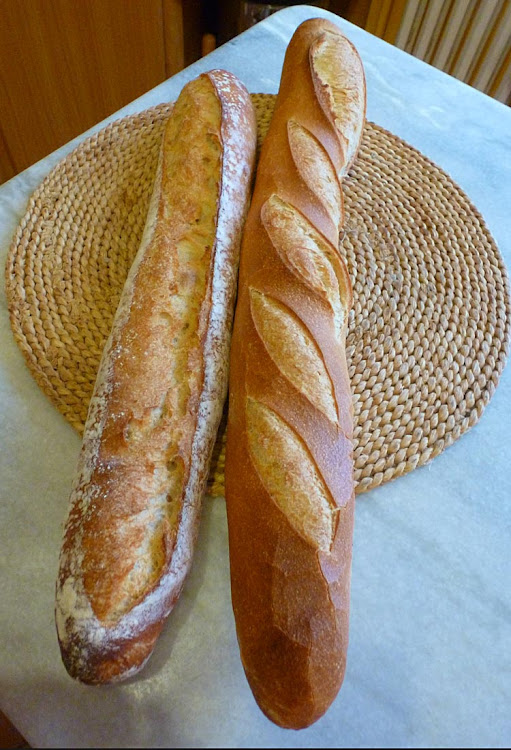 Twenty-five years ago, bread sales in France were plunging. People were eating less and less of it. It was bland and went stale very fast. The government intervened to create the so-called baguette de tradition, a bread made exclusively by artisan bakers. No frozen dough is allowed, and all chemical additives are banned. "Traditional" bread contains only flour, salt, yeast, and water. To qualify, the dough must be left to rise and rest twice the amount of time needed to make "ordinary" bread dough.


Recently, we've been buying both tradition and ordinaire baguettes, just to remember the difference. Paradoxically, the "non-traditional" bread is what I remember from the 1970s and 1980s, when I lived in Paris, Rouen, Grenoble, and Metz at different points in time. Here in the Saint-Aignan area, our village baker makes both. The tradi baguette costs 1.10 euros, and the ordinaire baguette goes for 0.90 euros. Anecdote: a year or two ago, a baker opened a new shop in the village (Pouillé) about five miles east of us and refused to make or sell baguettes ordinaires. He went out of business recently, because his customers weren't ready to give up their daily baguette ordinaire.