Toutché salé, or quiche with a bread crust

So day before yesterday I decided to make a toutché salé — a followup to the toutché sucré of last week. A toutché is a kind of tart that has a soft bready crust rather than a pie crust of crispy pâte brisée or flaky pâte feuilletée. It's a local speciality in the Franche-Comté area of eastern France. 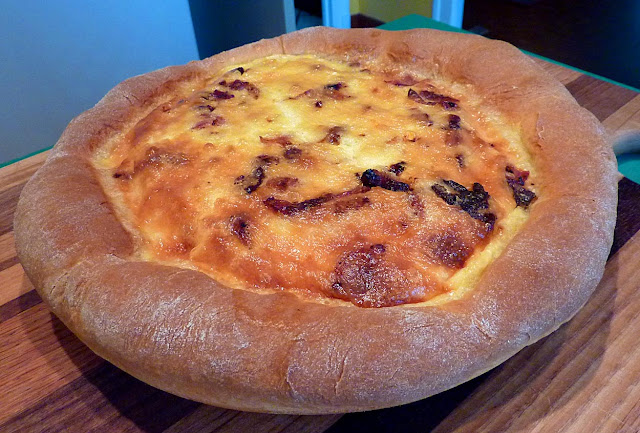 My friend CHM did some research and told me that he thinks the toutché comes from the northern part of Franche-Comté, up near its border with the Lorraine region. I've read before, and just found again, French web sites where writers say that the savory tart known as a quiche lorraine was originally made with a bread crust. If so, all this makes sense. Nowadays, quiches are most often made with a thin pie crust (pâte brisée in French). 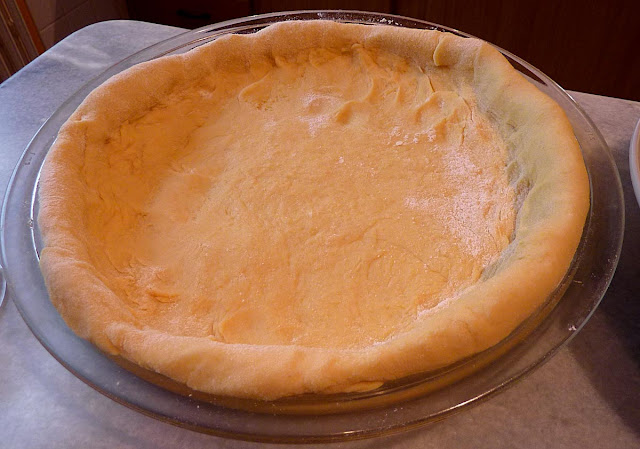 The toutché crust isn't exactly bread, or at least not pain in the French sense of the word. In France, pain — the kind that's baked into a baguette (wand) shape — contains only three ingredients: flour, yeast, and salt. Or four, if you count the little bit of water it takes to make the dough. 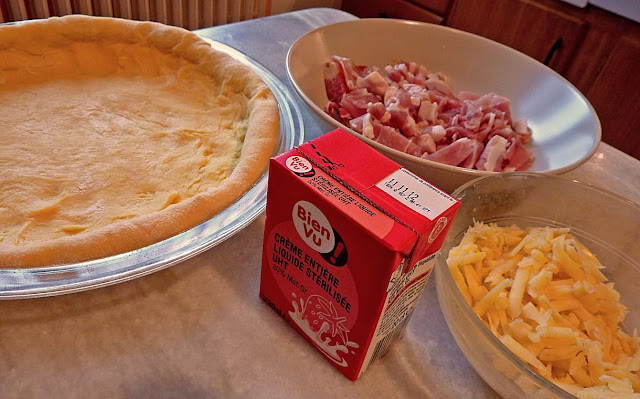 In the case of the toutché tart. the crust is more like a pâte à brioche (risen pastry dough) but with less butter and fewer eggs. For the savory tart (call it a quiche if you want to), I based my version on a recipe that makes only half as much dough as the one I followed for the sweet toutché last week. That one really was too big, and by the time we finished eating it, it was going a little stale.
Here's the recipe for the smaller amount of dough:

Mix the yeast into lukewarm milk and wait a few minutes for it to proof (foam up).


Meanwhile, put the egg, cream, and salt into a big bowl (the bowl of a stand mixer, for example). Mix well and then pour in the flour. Finally add, the milk/yeast mixture.


Mix all the ingredients together to form a ball of soft dough. Add a little more flour very gradually as necessary to make sure the dough is not too sticky — you want it to stay soft. Then add in the softened butter and knead the dough on a floured surface for 5 to 10 minutes (it's easier to use a mixer with a dough hook, or a bread machine).


Let the ball of dough rise in a warm place for at least an hour, or even two hours, in a covered bowl.


While the dough is rising, cook the bacon in a skillet. Mix the cream and eggs together in a bowl. Season to taste with salt (remember that the bacon is salty), pepper, and the nutmeg. Let the mixture warm up to room temperature as the dough rises.

When the dough has nearly doubled in volume, lightly flour a big pie plate (11" or 28 cm). Punch the dough down and either roll it out into a round shape the size of the plate or just spread it in the plate using your hands. Use a pie plate with slanted sides so that you can form a border of dough all around the edge, making a shape that will hold in the liquid filling. Let the dough rise in the pie plate for another 20 to 30 minutes so that the edges puff up.


Finally, use your hands to  flatten or punch down the bottom of the crust, leaving the border high and puffy. Spread the bacon over the crust and pour on the cream and egg filling. 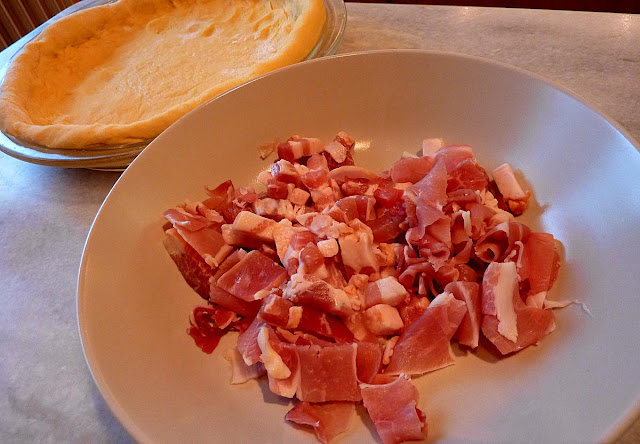 You might notice in my pictures that I added some cheese to the cream and egg filling. Yes I did. That's because I had some cheese I wanted to use up (Comté and Cantal) and also because I didn't have 200 grams of bacon, but just 150 grams. The toutché was going to be our lunch, with no bread and just a green salad alongside, so the cheese wasn't excessive.

Any quiche you like to make — spinach, broccoli, tomato — would be good with this bread-like — it can be called pain brioché — crust, and you don't need to serve bread with it. That would be overkill.
Posted by Ken Broadhurst at 07:30