French cream: what is it?


In France, all cream products except those labeled as crème crue (raw cream) are either pasteurized or sterilized — processed at a more or less high temperature for varying amounts of time, to prevent contamination and increase the amount of time the product can be stored safely. Raw cream is not widely available. It has a very short shelf-life. 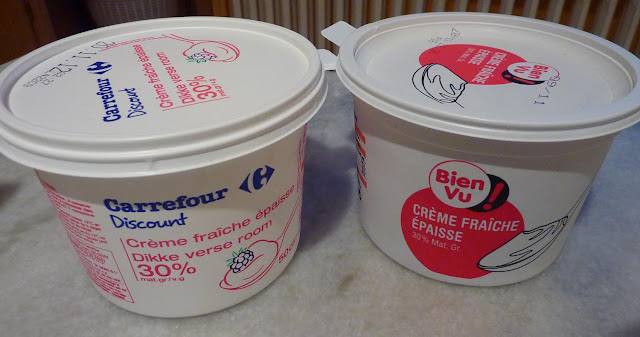 Half-liter tubs of crème fraîche are sold in supermarkets for about one euro each.


The most common label on cream products in France is crème fraîche ("fresh cream"), which can sold as in légère (light), liquide, or épaisse (thick) forms. Crème fraîche is always made from pasteurized milk, and because it is by definition pasteurized (pasteurisée) it is not required to be labeled as such — it goes without saying that that's what crème fraîche is. And the name is most often applied to a "cultured" or "fermented" cream — it contains bacterial cultures (ferments lactiques) that give it a slightly tangy taste (un goût acidulé) and, if sufficiently aged (maturée), a thick texture. 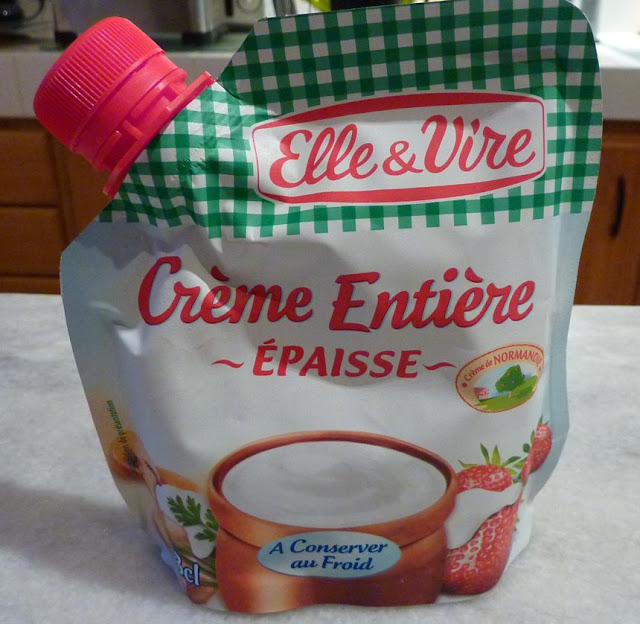 You probably pay as much for the packaging of this one as you do for the cream...


French butter, too, is made from cultured cream. That's why it has a tangier taste than, for example, butter you buy in the U.S. In his book On Food and Cooking: The Science and Lore of the Kitchen, the American writer Harold McGee says that in France, before the invention of the centrifugal separator, milk was left to sit overnight so that the cream would rise to the top and the milk would sink to the bottom of the container. Bacteria would grow spontaneously in the cream, "fermenting" or souring it slightly. Both the cream and the butter made from it had a slightly different taste compared to products made with "unfermented" raw cream.


Cream made from sterilized milk, which has a much longer shelf life and doesn't have to be refrigerated until the carton is opened, cannot be labeled as crème fraîche. Sterilization requires heating the milk or cream to a temperature of 115ºC (239ºF) for 15 to 20 minutes and then cooling it down for packaging. It tastes slightly "cooked" or "caramelized," some say. Sterilization kills the bacteria that would otherwise ferment the cream, so it doesn't have the distinctive crème fraîche taste. 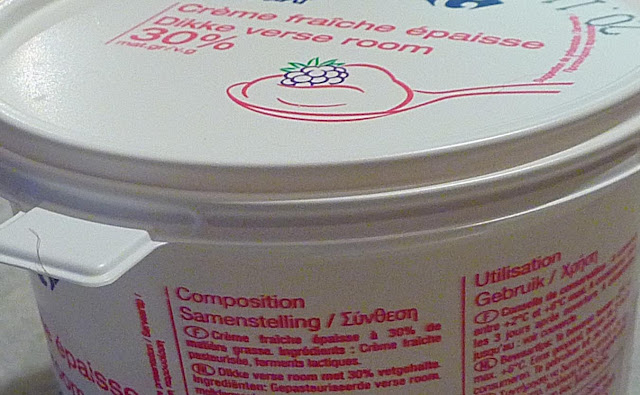 
Much of the milk sold in France is sterilized — especially skim milk, which seems to exist only in the sterilized form — for long-term storage. You can keep it at room temperature for a couple of months as long as you don't open the carton. Once the carton is opened and the milk is exposed to the air (and bacteria), it must be refrigerated the same as fresh (raw or pasteurized) milk. 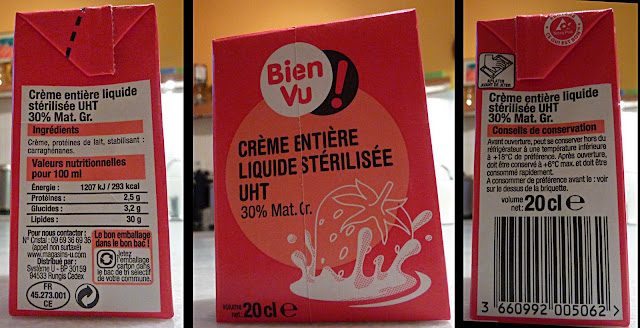 Long shelf-life sterilized cream is a good thing to have on hand.


I sometimes buy UHT cream at the supermarket that is labeled as crème entière liquide stérilisée UHT that contains 30% butterfat (matière grasse) but also carrageenans (a seaweed derivative) as a thickener or stabilizer. It can be stored at room temperature for several weeks, until you open the carton. It's fine for some purposes.


One form of cream in France that is not cultured is called crème fleurette. It is crème fraîche liquide pasteurisée that is not fermented. It can be kept about two weeks under refrigeration. It's used to make whipped cream (crème chantilly), mousses, and chocolate ganache, for example.And it's used in restaurant kitchens more than it is by home cooks.


The only cream that has been awarded the AOC (appellation d'origine contrôlee) designation in France is called crème d'Isigny, which carries the name of a town in Normandy. Isigny cream is a crème fraîche and therefore is made from pasteurized milk and is cultured. Isigny cream must contain at least 33% butterfat, but in practice nearly always contains 40%. 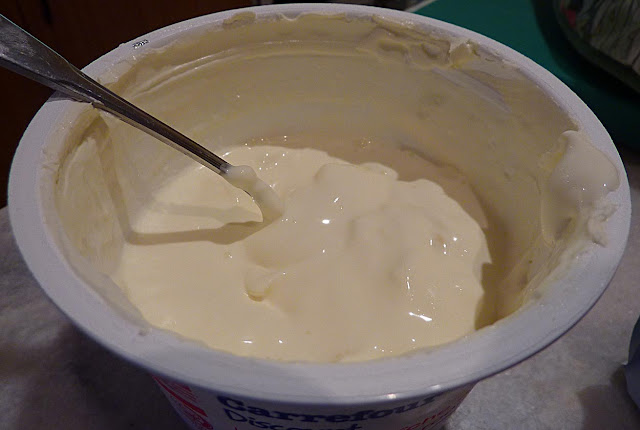 Crème fraîche épaisse is naturally thickened, with no starches or gums.


Crème fraîche is not the same thing as sour cream — which Harold McGee describes as "leaner, firmer, and less versatile" than the French product — because it isn't processed the same way and because it contains less butterfat (20%). That means sour cream contains more milk proteins, which will curdle when you cook it. Sour cream is much more acidic and less sweet-tasting than crème fraîche.


If you want sour cream in France, you have to make it yourself, by adding a few drops of lemon juice to crème fraîche — just as in America, if you want crème fraîche you have to make it yourself (in most regions of the country) by adding a tablespoon or two of cultured buttermilk or yogurt to American heavy cream and letting it "ferment" for several hours at room temperature.


Cultured creams like French crème fraîche not only have a tangy flavor that people like, but they can be kept longer before they spoil and they are easier on the human digestive system. The slightly acidic quality of cultured cream prevents or limits the growth of harmful bacteria. Some evidence points to health benefits for the human immune system resulting from consuming cultured as opposed to raw cream and other milk products. 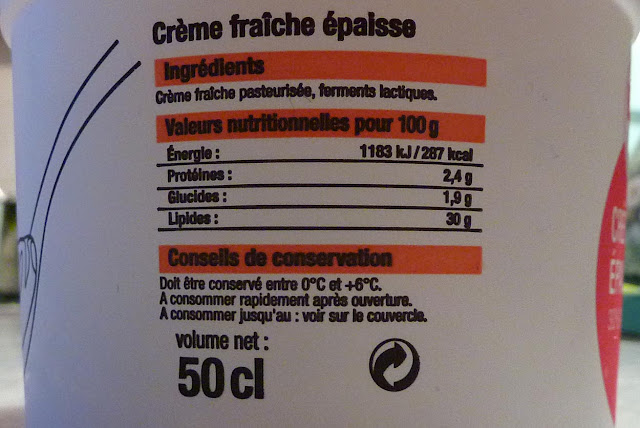 Ingredients are the same in this supermarket's discount brand as in the other's.


Raw cream, to me, has a slightly gamey, cloying taste. Butter made from uncultured cream is bland and much less interesting than the butter made from cultured cream as in France. The slight tartness that results from natural fermentation enhances and, I think, even improves the taste of the raw product.


If you are an expat living in France, you might not agree, depending on the cream you are used to buying, cooking with, and eating in your home country. Most Americans, I believe, find French crème fraîche to be a real revelation when they come to live here.


Besides Harold McGee's book, I've based a lot of this post on information I found on the Maison du Lait website (in French).
Posted by Ken Broadhurst at 08:36