I've published pictures of the château de Montpoupon before. It's on the road that runs north from Loches to Montrichard and Blois, as the milestone in my picture indicates. That puts it about a dozen miles (20 km) west of Saint-Aignan and about the same distance south of Chenonceaux. 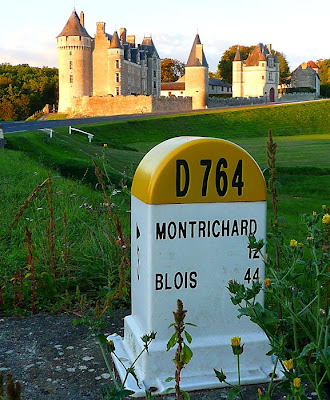 Le château de Montpoupon
Montpoupon is always a picturesque stop along the road. Once, when we first got here in 2003, we did the guided tour. The most interesting part of the tour was the old kitchen on the ground floor of the château. The guide had us guessing what various pieces of ancient equipment were designed to do. The château was lived in until recently, and the kitchen was functioning as late as 1978. I just read on the web site that you can now tour the château without a guide. That's new. Somebody told me that Montpoupon was recently sold to some Americans, but I haven't confirmed that. 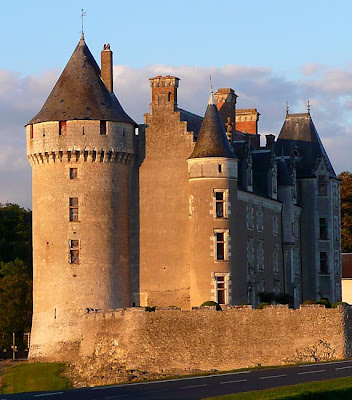 The massive towers are a couple of hundred years
older than the main building at Montpoupon.
The Michelin guide says the old towers at Montpoupon date back to a fortress that was built in the 1200s on the site. The corps de logis — the residential part of the building — was constructed in the 1400s. Like most of the Loire Valley châteaux, it has been modified and modernized and then restored to earlier styles several times over the past 600 years. It survived the French Revolution basically intact. 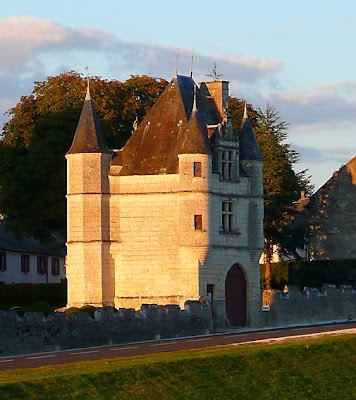 This little gatehouse dates back to the early 1500s,
the time when Chambord and Chenonceau were built.
Montpoupon was important strategically early on because it was situated half way between Loches, held by the counts of Anjou, and Montrichard, held by the counts of Blois. Later, it suffered through the 100 Years War before being rebuilt in the 1460s by new owners. 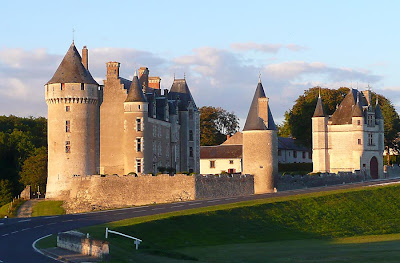 An overall view of Montpoupon
Most of the Loire châteaux are surrounded by a village or town. Montpoupon is an exception; it sits out in the middle of the country, kind of isolated except that it's on a main road. The châteaux's main attraction is a museum devoted to hunting. 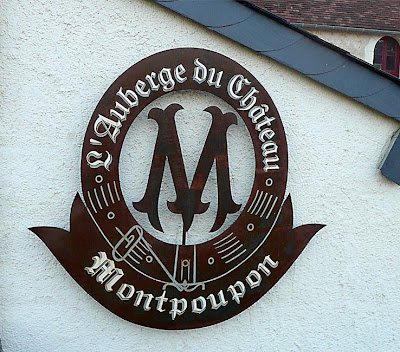 There's also a restaurant called L'Auberge du Château located on the property at Montpoupon. Information about all this, in French, can be found on this site. 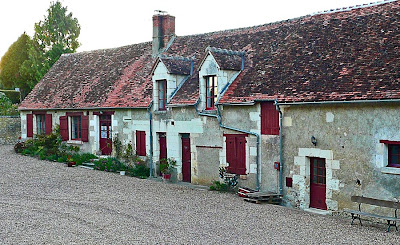 This old farmhouse is part of the Montpoupon property.
Our friend Gisèle told me she lived there for a while as
a young girl. Her father was a chauffeur and her mother
a bookkeeper for the owners of the château.
Finally, here's a picture of Janice and Joanna at Montpoupon. It was taken at sunset, at the end of a very busy in Valençay and Loches. 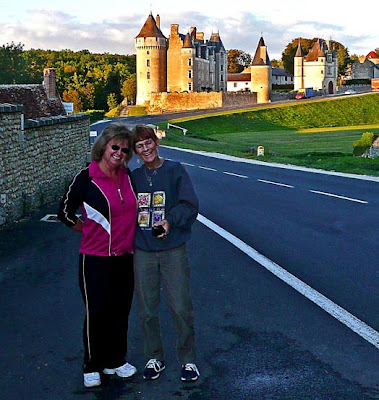