Another must: the Eiffel Tower

We left the Mont Saint-Michel at about 7:00 p.m. and drove the fastest route to Paris. That would be the autoroute that goes from Avranches past St-Lô to Caen, and then on to Rouen and Paris. I figured it would take us at least three hours. What with stopping to pay tolls at several booths along the way, and a couple of rest stops to get a cup of coffee and make a phone call home (not to mention my getting lost in Avranches at the beginning), it ended up taking us exactly four hours. 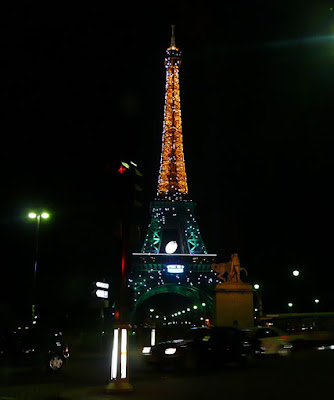 The Eiffel Tower twinkling at 11 p.m on a Thursday night
in a picture taken through the windshield of the car
One Paris monument that Joanna really wanted to see was the Eiffel Tower. She wanted to see it lit up and sparkling on the hour after dark, and she wanted to go to the top during daylight hours. I wanted us to do both also. I had been 10 years since my last trip to the top.

As we approached Paris on the autoroute from Normandy, I was watching the clock on the dashboard of the car and wondering whether we might arrive in time to see the 11:00 p.m. Eiffel Tower light show. At one point I decided it was best just to drive around the boulevard périphérique (the Paris ring road) and go directly to our hotel, which was on the other side of the city. That meant putting off the Eiffel Tower light show until Friday night. 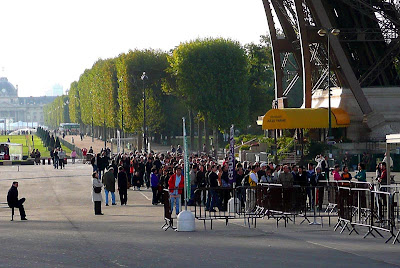 Lining up to buy a ticket for the
observation deck at the Eiffel Tower
Luckily for us, as it turned out, the south- and westbound lanes of the périphérique were closed for maintenance work that night. I had no choice but to go north toward the Porte Maillot, an exit I know and which leads to the Arc de Triomphe. We drove around the arch and down one of the broad avenues to get to the Place du Trocadéro, from where you have a clear view of the tower. 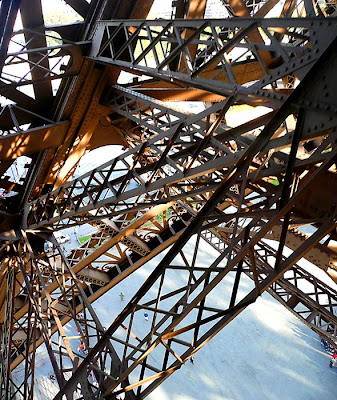 Looking into the tower structure from Level 2...
We pulled up at Trocadéro at 11:00 on the dot and the tower started twinkling. It was perfect. While the light show continued, I drove around the Palais de Chaillot and down to the bridge that crosses the Seine at the foot of the tower for a close-up view. Then we drove around to the Place de l'Ecole Militaire and along the boulevard that passes in front of the military school at the top of the Champ de Mars for one more look. At about that time, the light show stopped, but that was fine — we had seen it. 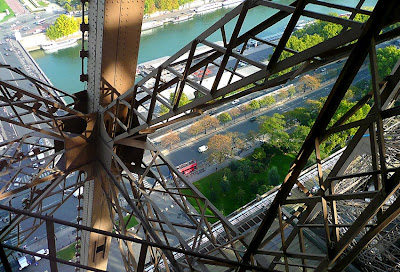 ...and looking down
It was midnight when we finally got to the hotel and got checked in. I found a parking space. The next morning, we got up at 7:00 and headed out on foot up to the Place d'Italie to catch the métro. It was direct from there to the Bir-Hakeim station just down the street from the Eiffel Tower. We were going to the top, come hell or high water. 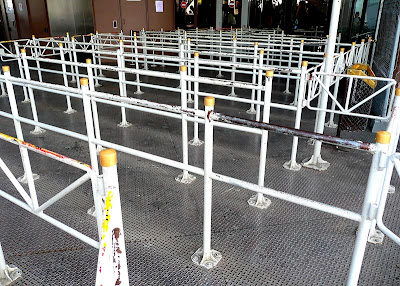 On Level 2, the line snakes through these fences
when it's really crowded. We were smart to go early.
The Sunday before, we had gone to the foot of the tower, but the ticket lines were just too long. We needed to hit the road and get back to Saint-Aignan that evening, and we were all exhausted. I asked a guard what time the tower opened on weekday mornings, and he said 9:00 a.m. So our goal was to get there by 9:00, and we did. We were extremely goal-oriented that morning. We even found a street toilet along the way and were able to be sure we would be comfortable standing in line for an hour or more if that's what it took. 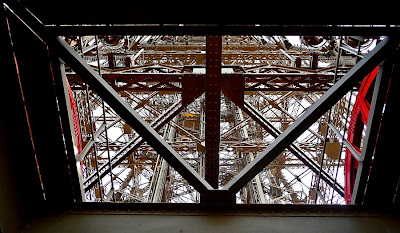 Another look up from Level 2
When we got to the tower, we queued up with the other tourists. The line wasn't as long as we had feared it would be. It was a beautiful morning. At 9:05, the line still wasn't budging. I left J & J to hold my place and went to check the sign above the ticket windows to see what time it opened and how much it cost to go up. The sign said 9:30, not 9:00, and the price of admission was 11.50 euros. 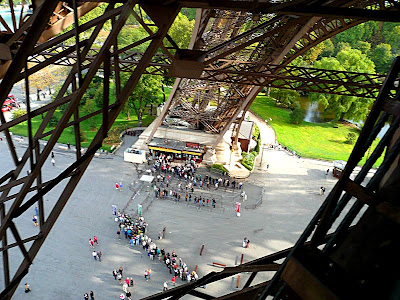 A look at the ticket lines below from Level 2
Nine-thirty came and we were soon in the elevator on our way to the top. It hadn't taken long at all. Even on the second level, where all the visitors coming up from the ground on different elevators in the four feet of the tower have to line up again and get on a different set of elevators to continue to the top, the wait wasn't more than ten minutes.
Posted by Ken Broadhurst at 08:25