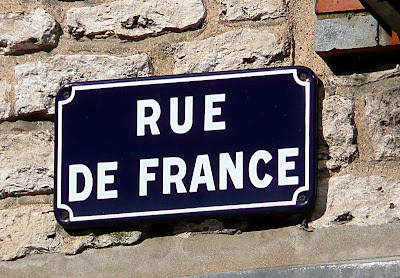 A good street sign in Fontainebleau
After an afternoon walking around in the 7th arrondissement and a drive through the center of the city to see Notre Dame and the islands, it was time to start the drive to Saint-Aignan. We decided to go to Fontainbleau along the way. Janice has a friend in North Carolina who once lived there and wanted to be able to show her a picture or two. 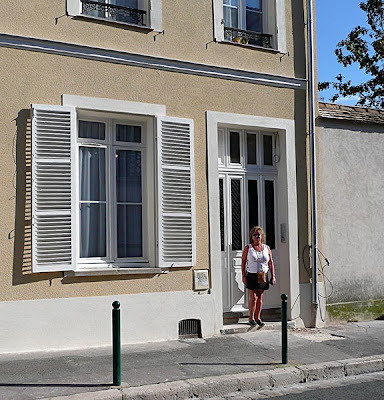 Janice in the white doorway
Many other people had decided to spend Sunday afternoon at Fontainebleau too. The big parking lot just south of the château was completely full of cars. We had to ride around for a few minutes and wait for somebody to leave before we could park. It was typical of a beautiful Sunday in September: everybody and his brother (or his sister, in this case) was out taking a stroll, taking advantage of what might be one of the last sunny, warm weekend days this year. 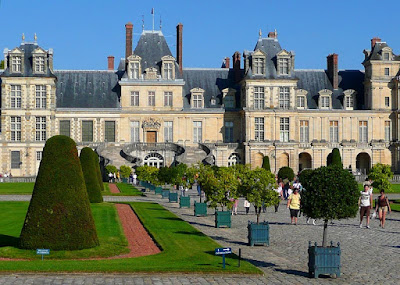 The main courtyard at Fontainebleau
Janice's friend said she had lived in a building with a white doorway, so we walk little streets looking for a white doorway we could take a picture of. We found several. Her friend, who lived there when she was a little girl, can pretend that was her house. 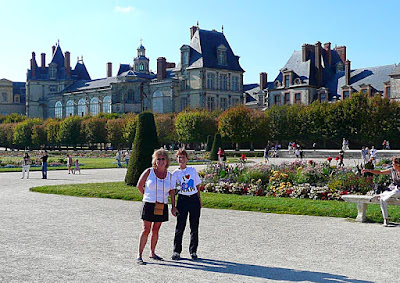 Janice and Joanna in the gardens
Janice's friend won't the be the only one interested in more descriptions and pictures of Fontainebleau. I know several others of you who will enjoy memories of past visits when you see all this. I know I have enjoyed going back there this month. 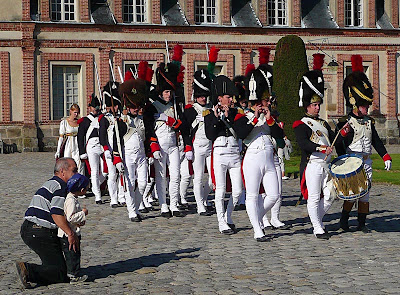 We had seen this fife-and-drum corps marching
through the streets of the town earlier
We walked around through the town and onto the grounds on the far side of the château instead of going in the front entrance. I noticed that the flower beds looked a lot drier than they did when I was at Fontainebleau about 10 days earlier. We've had almost no rain this whole month of September. Sunday, it was windy and warm, and kind of dusty. 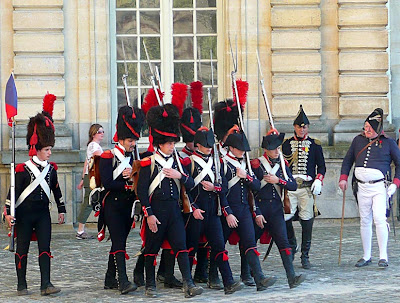 I like the look of the man on the right in the white britches
Around the château itself, groups of people in period costume marching around, some playing fifes and drums, others just marching to their own rhythm, for the entertainment of the crowds of visitors. We took a lot of pictures before getting in the car and driving on to Milly-la-Forêt, Malesherbes, and Bellegarde, on our way to Saint-Aignan. 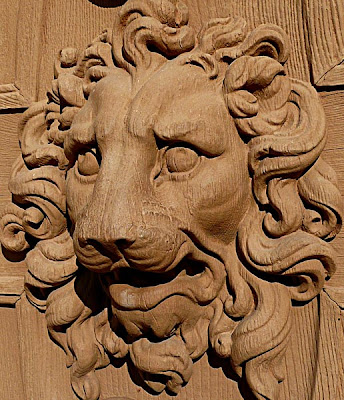 On a big door at the château de Fontainebleau
Posted by Ken Broadhurst at 07:44