... at the Mont Saint-Michel. Don't get me wrong — I'm not complaining. It's just that for a place that is so far from Saint-Aignan, it's getting a lot of attention from this Saint-Aignanais. I've been to the Mont at least half dozen times since 2004. 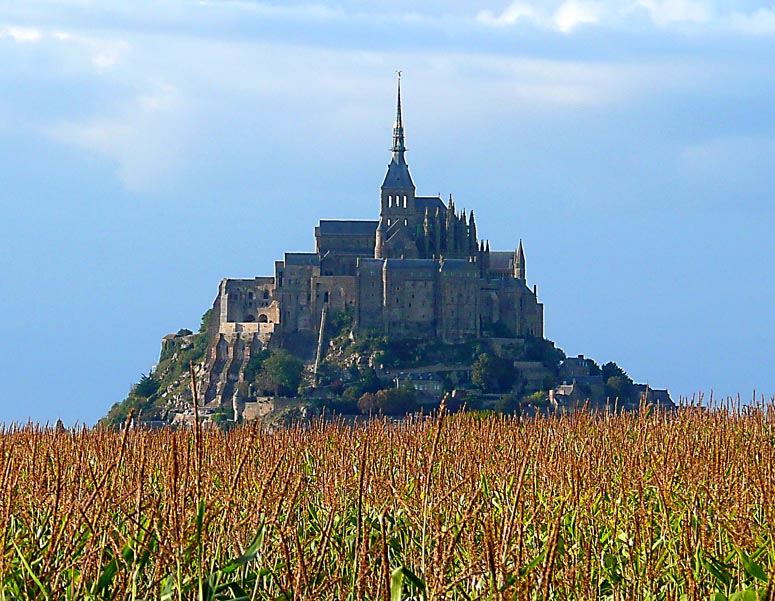 The Mont Saint-Michel seen across a cornfield on the edge of the bay.
I guess I'm struck by that number of recent visits because the first time I ever went to the MSM was in 1973 (when I was a very young boy). And the second time was 19 years later, in 1992, with Walt. The long time between visits wasn't because I didn't spend much time in France then — I lived in Paris for five years between 1974 and '82. I guess I was busy working.

It all started when I found out that a good friend of CHM's and mine had a house up in the village of Carteret, near Cherbourg on the Cotentin Peninsula. And guess what's just off the road that leads to Carteret. Yes. Le MSM. I drove up there to get CHM and a friend of his to bring them to Saint-Aignan in 2004, and we stopped to take a look at the Mont. 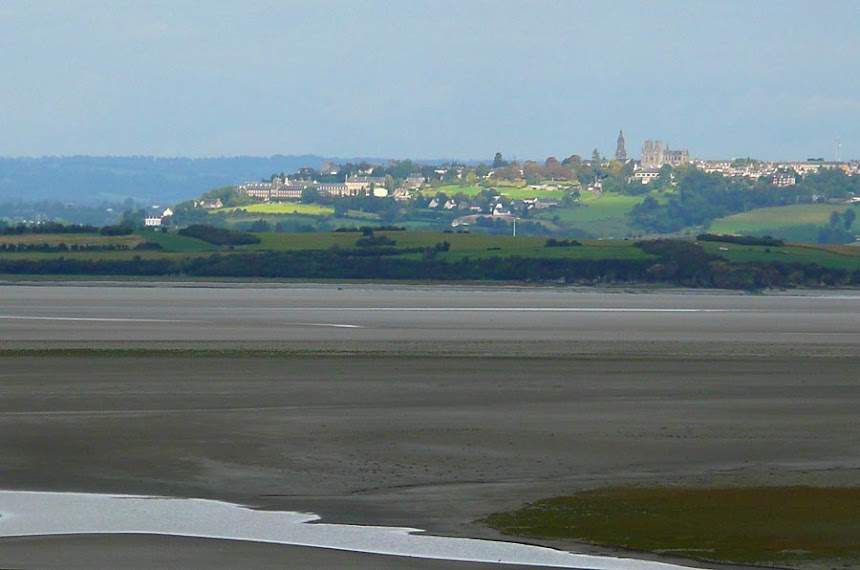 The town of Avranches seen across the mudflats from the Mont
Then, a few months later my mother and her sister came to visit. We decided to drive up to Normandy to see the town of Carteret, which gave its name to the North Carolina county I was born in. And we stopped at the Mont. We also stopped at several of the D-Day beaches. 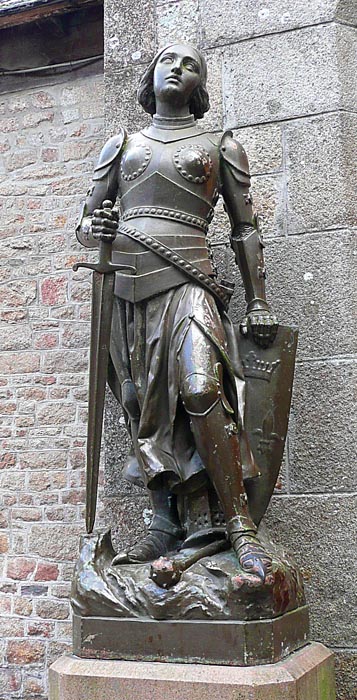 There's a little church on the Mont dedicated to Joan of Arc.
Saint Michael's was one of the voices that young Joan heard, in
the early 1400s, telling her to go chase the English out of France.
In May 2005, Walt and I decided to go to Normandy to eat oysters and mussels. We put the dog in the car and took off. We went to Carteret, and on the way we saw the Mont.

The Mont really is a sight to see, but all those times, for one reason or another, we didn't actually walk up its narrow streets and climb all the stairs required if you want to walk around the ramparts. In 2006, that changed. Our friend Sue from California was staying with us, and we wanted her to see the MSM. We drove out there — it takes about four hours on a good day — in mid-June. We spent the night in a hotel in Domfront, an old hilltop town where we've stayed before, and then drove the last few miles out to the Mont the next morning. 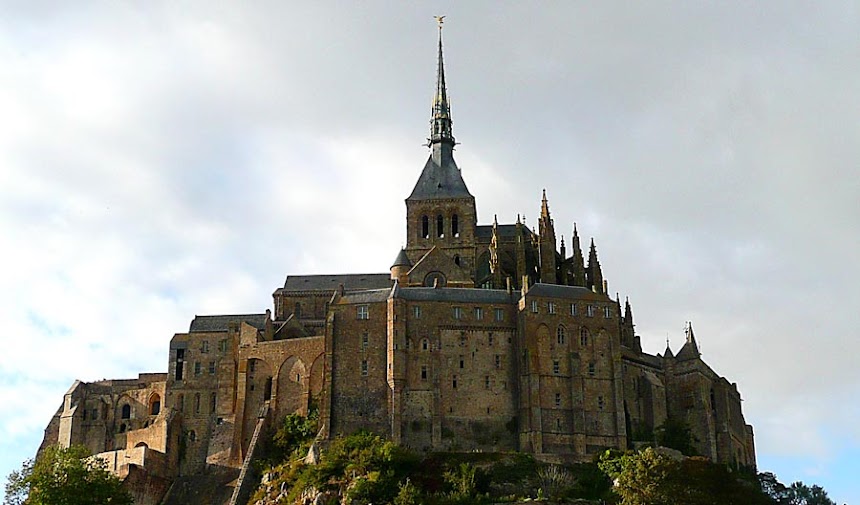 View of the church buildings on the Mont taken from the causeway
By the time we got there, the tour buses had already arrived and the narrow streets were elbow-to-elbow with tourists (including us). We walked (or climbed) up to the top and paid the price of admission to see the old abbey church and cloister at the peak of the Mont. Then Sue went shopping in all the boutiques lining the main street while Walt and I sat down at a table on the outdoor terrace of the Vieille Auberge and ate mussels and frites with some good Muscadet white wine. 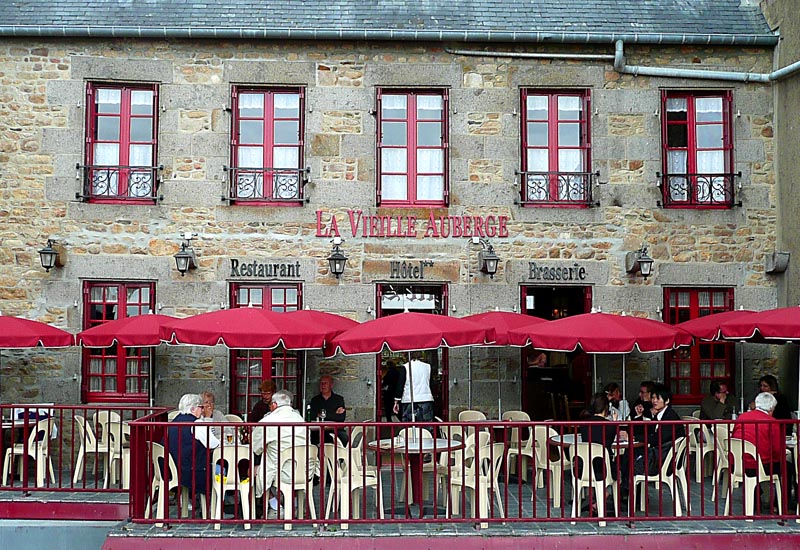 This is where we keep returning for meals on the Mont.
It's not gourmet fare, but it's good and the prices are reasonable.
That experience convinced Walt and me that we wanted to go to the MSM in the winter to experience the atmosphere without crowds of tourists. January and most of February 2007 came and went without our budging from Saint-Aignan, and then I said to Walt that I wanted the trip to the Mont as my birthday present in early March.

We went and it was great. It rained, just as it is supposed to. It poured, actually.The high tide came in and the Mont was completely surrounded by water, with the exception of the high part causeway that links it to the mainland and that was built in the late 1800s. The Mont itself has been there since time immemorial, of course, and churches and monsteries have been in existence on its peak for more than a thousand years.

Speaking of that causeway, the French government has a plan to supprimer it. Tear it down. Rip it out. They want to make the Mont into real island at high tide again. The causeway will be replaced by a bridge that tourists can walk across, and that little shuttle buses can cross to carry who can't or don't want to hoof it. Water will flow under it, and not be blocked by it. 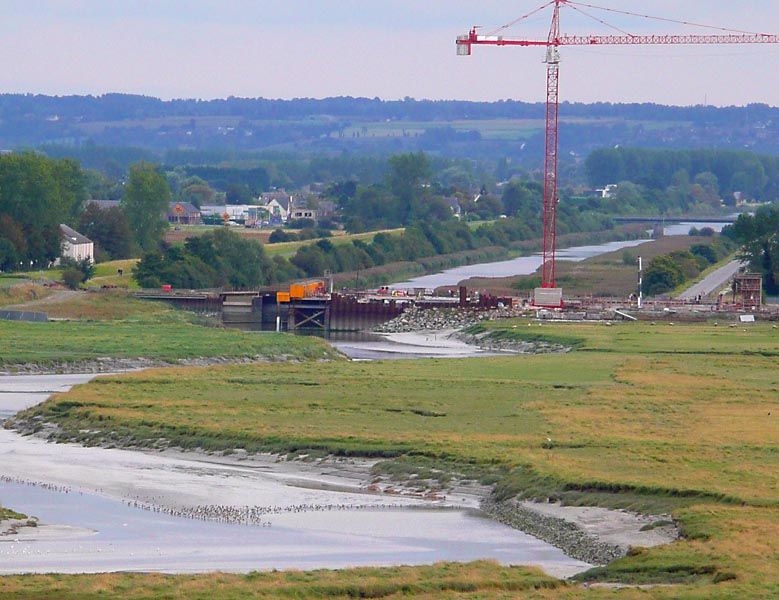 The dam being built across the mouth of the
Couesnon river at the Mont Saint-Michel
Sand has been building up around the Mont for more than a century, so only the very highest tides can surround it entirely nowadays. In order to wash away some of that build-up of sand, the authorities are putting up a dam across the river that flows into the bay at the foot of the Mont. When the highest tides come in and push water up into the river, they will close the dam. More water will build up from the river's natural flow. At the right time, they will open the floodgates and all that water will flood out and start pushing the sand back out to sea. After some unspecified length of time, they hope, the Mont will become a real island again. 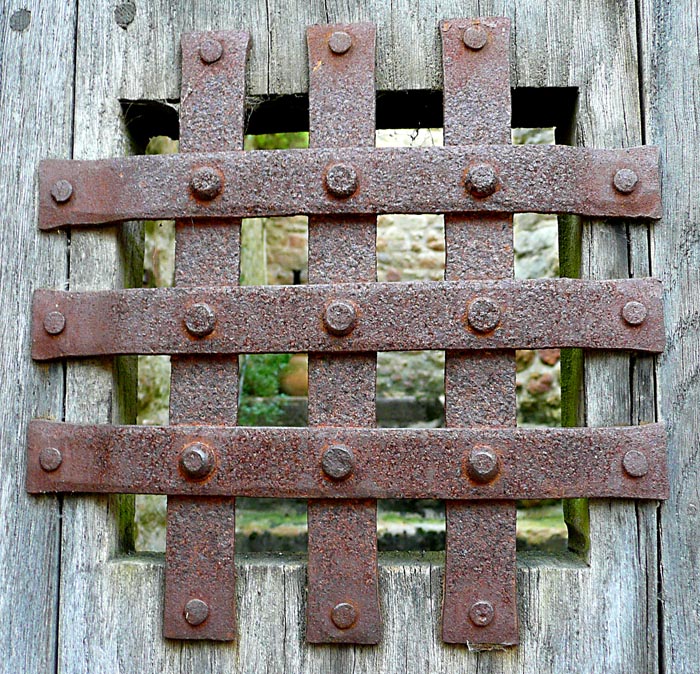 An old gate along the streets of the Mont
With Joanna and Janice, I drove back to the Mont again on 20 September. We stopped in our village just outside Saint-Aignan to buy some wine from Bruno and the Domaine de la Renaudie. J & J wanted to take back a couple of bottles each as gifts. They each got a bottle of rosé (Perle de Rosée, one of our favorites) and a bottle of 2006 Sauvignon Blanc AOC, the winery's specialty. Bruno was busy dumping a load of white wine grapes into the pressoir and we watched for a few minutes, and then he took the time to sell us the bottles we wanted. His wife Patricia was out supervising harvest operations in the vineyard.

Then we stopped in a big Centre E. Leclerc, a hypermarket (as they call it in French) or superstore if you prefer, re J & J loaded up on cookies, chocolate, tea towels, and other items to take back as gifts for their co-workers and friends. By the time we really started the trip toward the Mont, it was noon. 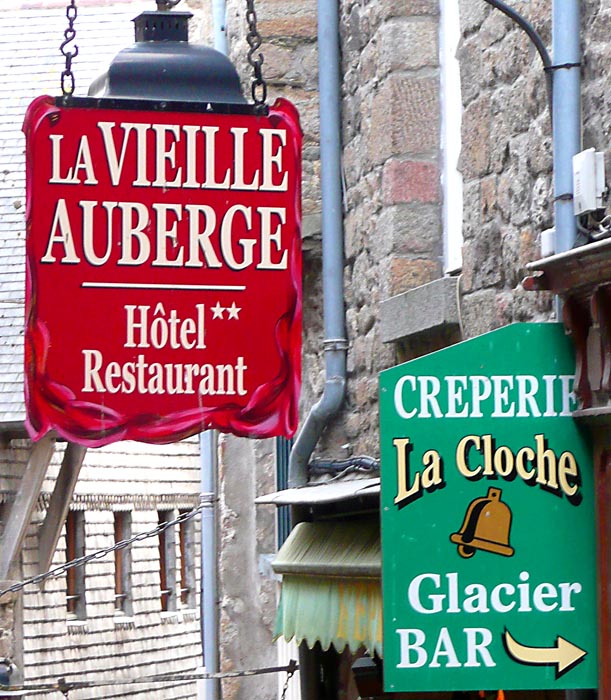 Signs on the main street of the Mont
We stopped for a roadside picnic — I had made sandwiches early that morning — between Le Mans and Laval at an autoroute rest stop, and arrived at the MSM about 4:30 p.m. We just had time to take a walk around the lower ramparts and admire the views. The tide was low. We didn't go up into the abbey. We did a little souvenir shopping, and then we went — where else? — to the Vieille Auberge for a dinner crêpe, a glass of wine, and a cup of coffee. Joanna said that the crêpe (or galette, really) she had, filled with ham, egg, and cheese, was just about the best thing she had eaten in France.

As you probably know, the Catholic calendar used in France dedicates each day of the year to a saint. Today happens to be Saint Michael's feast day. Just a coincidence.