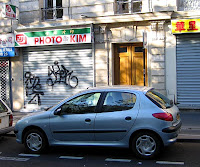 Last Saturday, we spent the morning in the Belleville neighborhood in northeast Paris. The rue de Belleville is the border between the 19th and 20th arrondissements. We parked the car near the Belleville métro station about 8:45 and then walked up to the Pyrénées station and on to the Buttes-Chaumont station.

It turned out that parking was free on the boulevard de la Villette on Saturdays, so we were able to abandon the car for the morning.

It was just Walt and I, and we were looking for a restaurant he had read about on Clotilde's Chocolate and Zucchini blog. It's a Thai restaurant called Lao Siam, and we want to have lunch there. We were supposed to meet Tony and Chris at the Buttes-Chaumont station at 10:00.

We walked up the rue de Belleville, very quiet at that hour, looking for the street number (Lao Siam is at number 49). That's how I noticed this door with a plaque over it. It said, among other things, EDITH PIAF in all caps. 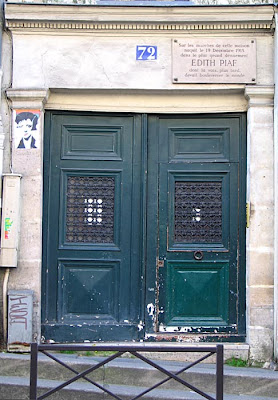 The singer Edith Piaf was born here,
at no. 72 on the rue de Belleville in Paris.
I crossed the street for a closer look. The sign says Piaf was actually born on the steps in front of this door (translation in the photo caption). Piaf's birth name was Édith Giovanna Gassion. After a tumultuous international career France's best-known singer, she died at the age of 48 in 1963. Tens if not hundreds of thousands of people flooded the streets of Paris to attend her funeral at Père Lachaise cemetery. 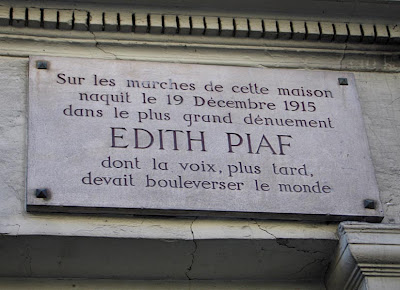 On the steps of this building
was born on the 19th of December 1915
in utter destitution
EDITH PIAF
whose voice, in later years,
would shake the world.
People all around the world know the sound of Piaf's voice and at least one of her famous songs: La Vie en Rose. She wrote it in 1945. A new movie with that title is out now and the reviews have been good. In France, the film is called La Môme (The Child), which was Piaf's stage name at the beginning of her career in Paris.

Walt and I found the restaurant, which looked like it might be open for lunch that day, and continued our walk up the rue de Belleville. When we got to the Pyrénées métro station, we went into a café to have breakfast. For Walt, that was a grand café noir (also called un double express). For me, it was the same thing plus a croissant. 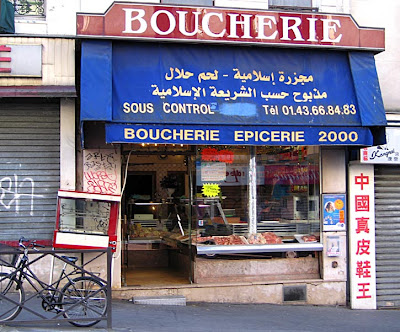 A butcher shop on the rue de Belleville
Then we walked up the avenue Simon-Bolivar to meet Chris and Tony at the Buttes-Chaumont métro stop. We were going to take advantage of the fine weather by taking a stroll through the park and taking some pictures. It was full of joggers and people walking dogs. Other people were pushing strollers or walking their toddlers. The flower beds were in full bloom and the views of Montmartre were spectacular. 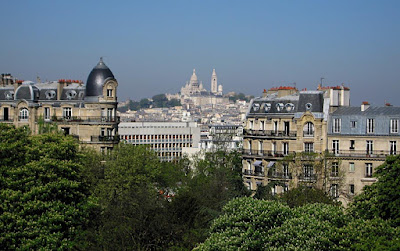 Sacré-Cœur and the Butte Montmartre
seen from the Parc des Buttes-Chaumont
After seeing the park we walked back over to the rue de Belleville. We walked up even further, since we had an hour or so to kill before it would be time for lunch. We went into a church and looked around, but mostly we just walked along the street looking into shop windows. 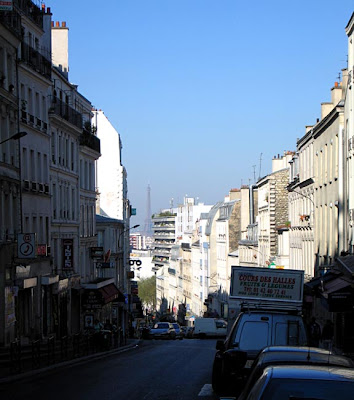 This is not a great picture, but it shows how steep
and shaded the rue de Belleville is. You can see
the Eiffel Tower off in the distance.
At noon we had a fine lunch at Lao Siam. I remember we had prawn spring rolls and also beef spring rolls as an appetizer. I had prawns with vermicelli noodles as my main course, and Chris had a stuffed crab, but that's all I remember. You can read some customer reviews (in French) of the Lao Siam restaurant here. 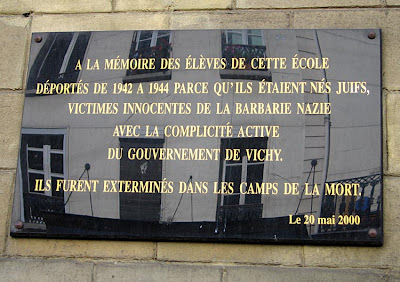 To the memory of the pupils of this school
deported from 1942 to 1944 because they were Jewish,
innocent victims of the Nazi barbarity
with the active complicity
of the Vichy government
they were exterminated in the death camps
After lunch we walked on down the rue de Belleville, looking at all there was to see, including the plaque pictured above, and continued on into other neighborhoods.
Posted by Ken Broadhurst at 10:05