After our Thai lunch, we walked down the rue de Belleville toward the Belleville métro station. We were looking for a place to have coffee and maybe even a dessert, which we hadn't had at the restaurant. The street turned into the rue du Faubourg-du-Temple and it was lined with all manner of shops, but no inviting cafés. The sidewalk was crowded with people too. 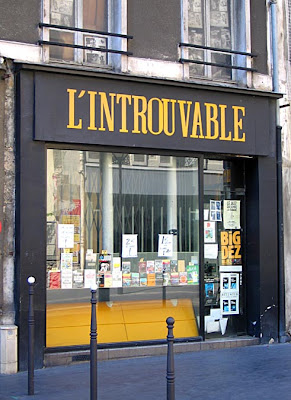 We headed up that way, and Walt said there would be some big cafés on the Place du Colonel-Fabien, just a little farther up. I asked Chris and Tony if they had ever seen the headquarters building of the Parti Communiste Français, which is located on that place. They hadn't, so it was another sightseeing opportunity. 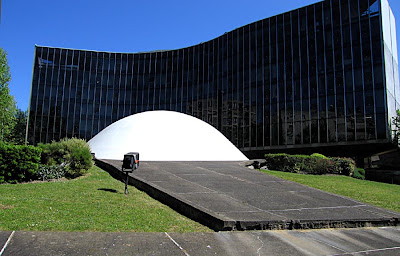 The austere headquarters building of the Parti Communiste
Français, on the Place du Colonel-Fabien in the 10th.
In this time of presidential elections, it's interesting to see what has happened to the French communists. Their electoral base has nearly disappeared. In the 1960s and '70s the communist leader, Georges Marchais, was a major political figure, right up there with Mitterrand and Giscard, and he and his party's other candidates got as much as 25% of the vote in presidential and legislative elections.

But the late '60s and the '70s saw the communist party's decline in France. The Soviets sent tanks into Prague to put down a liberal regime in 1968, and that looked bad in the West. Marchais allied the communist party with Mitterrand's socialists in the early 1970s, and he ended up playing second fiddle to the socialist leader. And then the Soviets invaded Afghanistan in 1979. 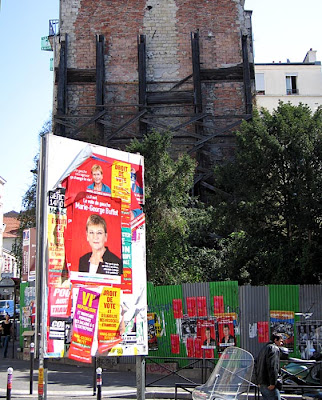 A campaign poster for the communist candidate for president,
Marie-Georges Buffet, that we saw on the rue de Belleville
I remember knowing young French people back then — people of my age, since I turned 30 in 1979 — who were committed communists. It was a idealistic thing. The communists had played a major role in defeating the Nazis. The communist ideal proclaimed egalitarianism and a classless society, including limits on the power of the rich and the big corporations. But when Moscow sent troops into Afghanistan, their disillusion was complete. That wasn't how they thought a communist state should operate. 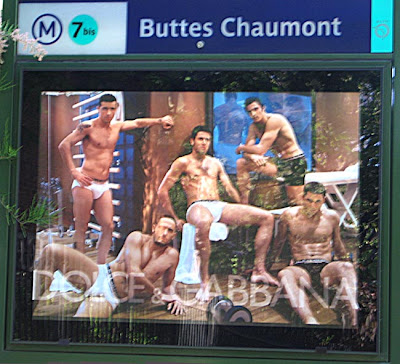 Do you think you'd see this kind of advertising in an American city?
The French communist party went into a steep decline, especially when Mitterrand and the socialists took the French presidency in 1981 and relegated the communists to a minor role in the coalition.

In the latest election, the Parti Communiste's standard-bearer was a woman named Marie-Georges Buffet. She ran not as a communist but as an anti-libéral candidate. That's anti-liberal in the French sense, which means anti-capitalist, anti-globalization, and anti-free-trade.

Buffet got just 1.3% of the vote in the first round of the presidential voting a week ago, compared to socialist Ségolène Royal's 26%. In other words, she did even worse than her predecessor had done in the 2002 presidential election, failing to reverse the communists' decline.

Meanwhile, we walked up the rue Juliette-Dodu (she was a hero of the Franco-Prussian War) and past the building where Walt lived for a while. I have good memories of that place — we had my 33rd birthday party there. The neighborhood has changed a lot in 25 years, with new buildings all around. 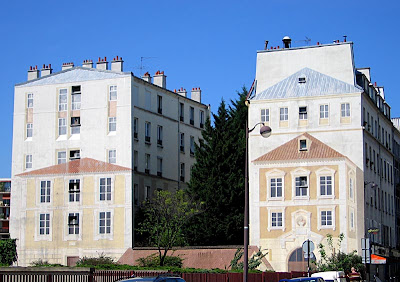 Trompe-l'œil façades painted on buildings on the rue Juliette-Dodu
We walked on and found a café with tables out on the sidewalk facing the communist party headquarters. We had our coffee but no dessert. It was hot sitting in the sun and it was time for Walt and me to start our trip back to Saint-Aignan. We walked down the Boulevard de la Villette to the car, and on the way we passed a store on the Boulevard de la Villette that had the Moroccan cooking dishes called tajines on display in its windows. 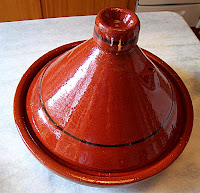 I went in and talked to the shopkeeper. He showed me tajines in several sizes, and I decided to buy one that looked big enough to hold enough food for at least two people (at 24€, not a bad deal). Tajines are made of terra cotta (terre cuite).

The man explained that you can cook in a tajine on a gas burner on top of the stove, but not on an electric burner unless you put on of those little wire grates between it and the hot cooking surface. I'll just use it in the oven. There's a little vent hole in the conical lid that lets steam escape during cooking. 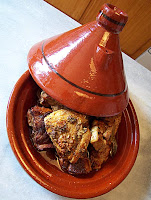 I cooked a pork roast in it day before yesterday, and today I'm going to make a tajine of chicken with artichoke bottoms, green peas, and Moroccan spices. It's time to go cut the chicken up now.

This is the pork that I roasted in the tajine a couple of days ago.
Posted by Ken Broadhurst at 08:56