On Sunday April 30 we drove from our gîte near Sarlat over to the town of Rocamadour in the Quercy (département du Lot). We went south through Gourdon and then on little back roads through a big regional park to the village of Couzou. There we turned north to enter Rocamadour from the opposite side of the Alzou river canyon, where you get some of the best views of the town. 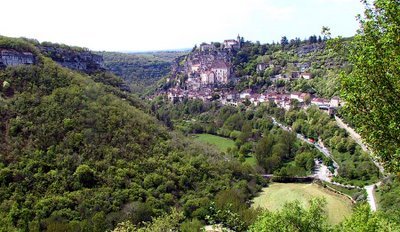 Rocamadour in its canyon, seen from the east
The Cadogan guide called Dordogne & the Lot describes Rocamadour as a "medieval French version of a Pueblo village in North America, a vertical cliff-dwellers' town." And so it is. The river cuts a deep ravine through the landscape, and the town is a grouping of houses and buildings piled on top of each other on a cliff, topped by a château. 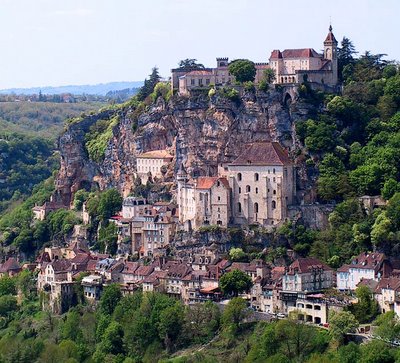 The view from across the river, looking north
Rocamadour is named for a saint called Amadour -- this was his rock. No one knows exactly who he was or when he lived, but his intact corpse was found buried near the church in the village in 1166 A.D., according to legend. Some say he was a hermit of Egyptian origins. Others say he was a disciple of Christ who ended up living in this part of the world. 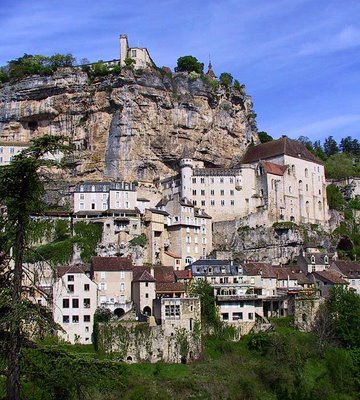 A closer view of the old village, with the church and château above
In the middle ages, Henry Plantagenet, king of England, came here to pray to the statue of the Virgin Mary in the church, as did many others. Rocamadour was a pilgrimage site for French kings and religious figures. The cult of Notre-Dame de Rocamadour spread to Spain and Portugal. 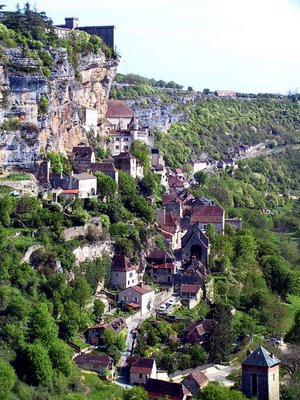 The old village seen from the southwest
Rocamadour reached its apogee in the 13th century. During the 100 Years War, the English and assorted bandits sacked the place numerous times. Later, during the great wars of religion, protestants did the same. They tried to incinerate the still-intact body of Saint Amadour, but it wouldn't burn, legend says. 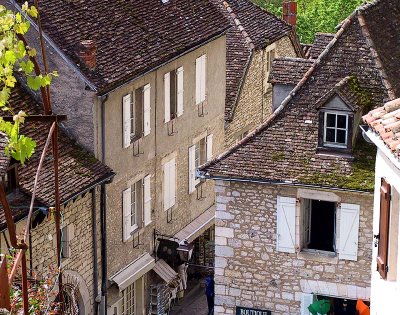 Houses along narrow streets in Rocamadour
Rocamadour never really recovered from the ravages of the late middle ages. In the 19th century, the bishops of the nearby town of Cahors tried to relaunch the pilgrimages and restored the church and other buildings. They were fairly successful. But most of today's pilgrims go by another name — they are simply tourists. 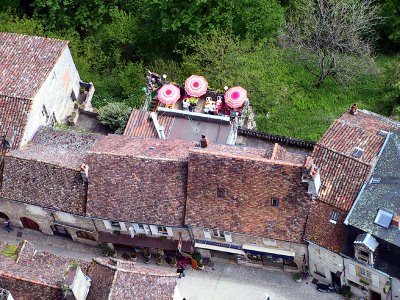 Looking down on the village from the château at the top of the cliff
The streets of old Rocamadour are lined with shops selling all kinds of souvenirs and postcards alongside local food specialities including foie gras and tins of confit de canard. There are plenty of restaurants, and because the town hangs off the side of a south-facing cliff, the outdoor tables are a warm and pleasant place to have lunch when the sun is shining. 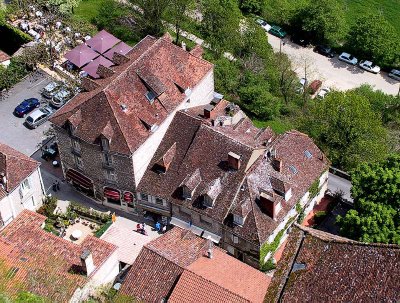 A bird's-eye view of the tiled roofs of old Rocamadour
You can walk from the streets below all the way up to the château to admire the fantastic views. Or you can take an elevator (2.50€ for a one-way ride, or 4.00€ for a round trip!). In olden days, pilgrims — often on their knees — would climb the 233 steps from street level up to the church, which was rebuilt in Gothic style in 1476 after a boulder fell and destroyed an older church on the site. In the church stands a famous Black Virgin — a 2-foot high statue of Mary with the Christ child carved out of walnut wood in the 12th century. 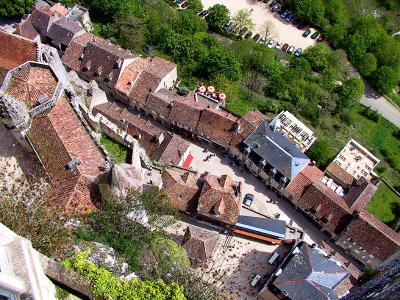 The rooftops of a complex of religious buildings is on the left in this picture
After a lot of climbing around, we (and hundreds of others) had lunch in one of the restaurants in the village. We sat outside and had a view out over the canyon. I had a steak (bavette- frites- salade) and Walt had a pizza. Our friend Sue had spaghettis à la carbonara. It was a most pleasant way to end our tour. 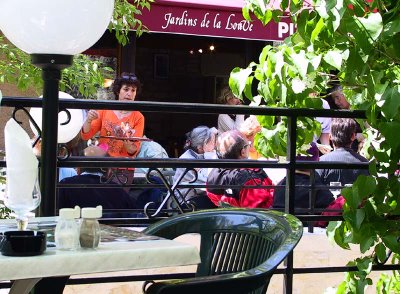 Lunchtime at a café-restaurant in Rocamadour 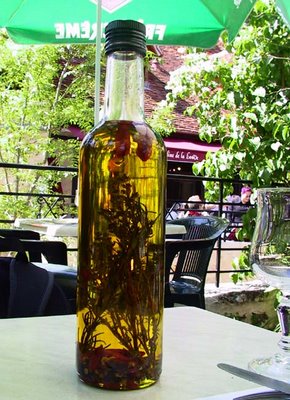 A nice bottle of herby, peppery oil for the pizza
Posted by Ken Broadhurst at 09:24