If you've ever eaten more than a few times in Paris cafés or brasseries, you've probably come across or even ordered what's called a salade piémontaise. It's a standard item, like carottes râpées, salade de betteraves, or céleri rémoulade. You can also buy it ready-made in French supermarkets. I decided to make a salade piémontaise the other day, using ingredients I had in the fridge and pantry.

Salade piémontaise is a potato salad. The piémontaise in its name refers to the northern Italian region of Piemonte, but there is some doubt that the salad actually originated there. France controlled that region for more than 50 years in the 19th century, and somehow this salad got the name. The main ingredients are potatoes, cornichons (pickled gherkins), ham, hard-cooked eggs, and tomatoes. The dressing is a mixture of mayonnaise, mustard, and yogurt (or cream). 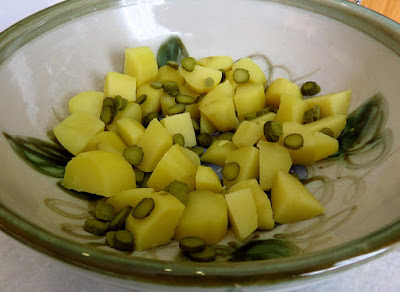 I've seen recipes that called for saucisses de strasbourg cut into chunks, or lardons fumés, or even chunks of cooked chicken breast, instead of ham. All that sounds good to me. The things you can't really leave out or substitute for seem be the potatoes, the cornichons, the eggs, and the creamy white dressing. If tomatoes are in season, they're standard too.

Hard boil the eggs by putting them into a pot of cold water, bringing it to the boil, and then turning off the heat and letting the eggs sit in the hot water for about 10 minutes. They won't be overcooked. 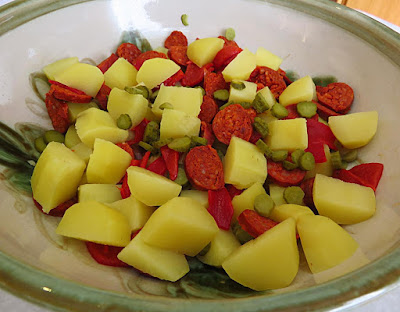 Tomatoes aren't in season yet, so I substituted some roasted red bell peppers, cut into largish pieces. And in the refrigerator we had two little Spanish chorizo sausages that we had grilled a couple of days earlier. They replaced the ham.


The dressing was half a cup (120 milliliters) of plain yogurt or liquid cream, the same quantity of mayonnaise (from a jar), a tablespoon of Dijon mustard, a squirt of cider vinegar, and a few drops of Worcestershire sauce, with some salt, black pepper, and cayenne pepper. Stir it all together well. Thin it slightly with water to make it pourable.

I remember first discovering salade piémontaise when I was a student in Aix-en-Provence and in Paris way back in the 1970s. I was happy to find a potato salad like this one, because I missed the American potato salads I — we all — had grown up with. And the fact is, French potatoes are so good and creamy, but they don't fall apart in the creamy dressing. Cook them in a steamer for the best result. 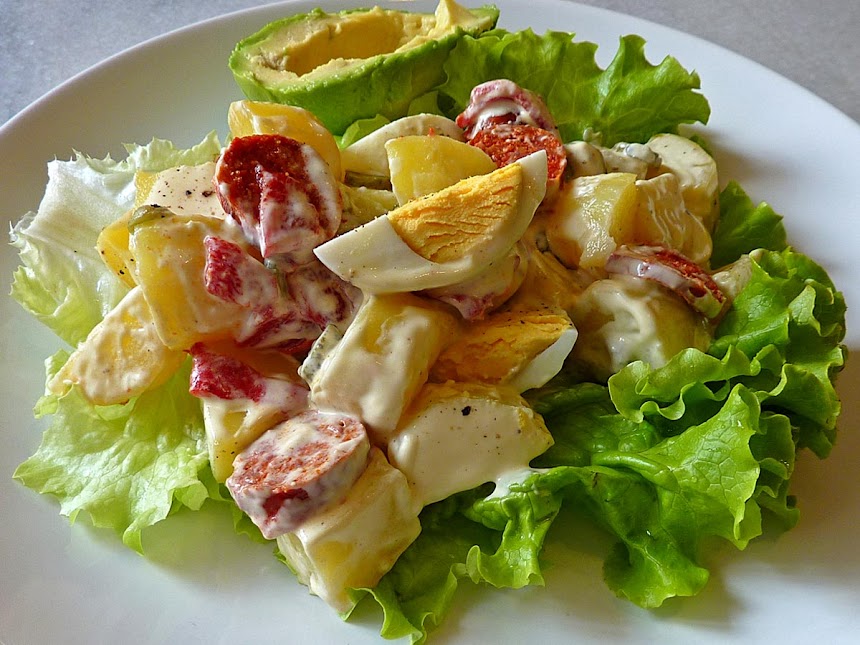 American potato salads are usually yellow, because one ingredient of the dressing is bright yellow "ballpark" mustard. Not this one. Try not to overdo the dressing, actually. It's better thinned down enough that you can pour it on and let it just barely coat the salad ingredients. Put the eggs on top and try not to break them up by too much stirring. Avocado on the side or cut up and added to the salad is good too.
Posted by Ken Broadhurst at 07:15