A cake called a « toutché »

I was surfing around on the web yesterday morning when I came upon a site — a blog — where I found a recipe for a French cake I'd never heard of before. It's called a toutché (I've also found it spelled toutche without an accent, or even touché without the second T) and it's a specialty of the area called La Franche-Comté in eastern France. 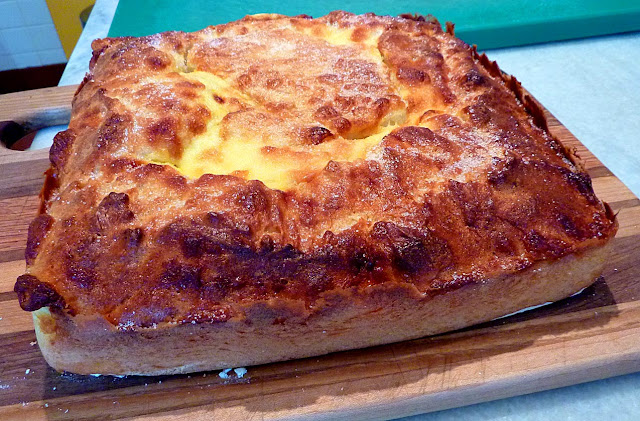 A toutché cake, from the Franche-Comté region of France

I have no idea where the name comes from or what its derivation might be. Since we were having friends over last night for a light dinner, an apéritif dînatoire, and I had the whole day ahead of me, I decided to make a toutché that we could serve as dessert. The blog where I first found the recipe, Tout le Monde à Table, describes it like this:

Here's the recipe, which I've translated and adapted. By the way, our friends from California really liked it and both asked for a second helping. 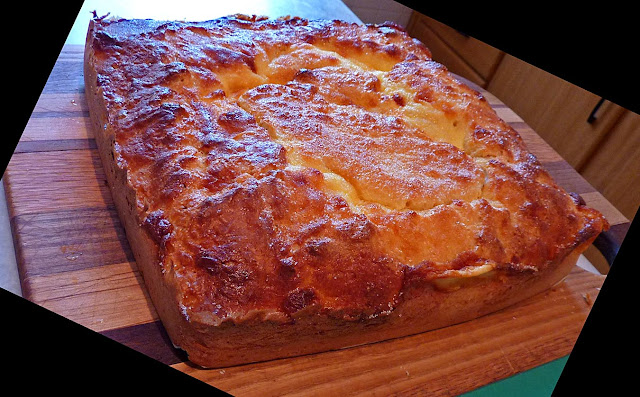 To make the pastry, put all the ingredients into the bowl of a stand mixer in the order listed. Mix the dough for five minutes and then let it rise in a covered bowl for about 2 hours. (You can also make the dough in a bread machine.)

When the dough is ready, spread it out to fill a non-stick cake or pie pan that's been dusted with flour.

Make the cream filling by mixing the eggs (or yolks) into the cream. Stir in the sugar. (Some recipes call for a little vanilla or other flavoring to be added to the filling.)

Using a fork, make a half-inch raised border around the edges of the dough in the baking pan so that the cream filling won't run off. Pour the filling onto the dough.

Cook the cake in an oven pre-heated to 180ºC / 350ºF for 25 to 30 minutes. The top should brown lightly. Sprinkle on some sugar while the cake is still hot from the oven. Serve at room temperature.

This kind of cake isn't very sweet by American standards, but the brioche-type pastry is very tender and tasty. My toutché dough didn't have a high enough lip around the edges so the filling spread over the whole top and some ended up inside the cake after it cooked. No matter — it was still very good, and looked nice.

Next time I'm planning to make a savory toutché, putting no sugar but a little salt in the cream filling, along with some cooked lardons (chunks of smoked bacon or ham).
Posted by Ken Broadhurst at 07:55