I'm going to SuperU to get a few things this morning and I was looking through the flyer the supermarket chain sends out on Mondays to see if there are any specials we might be interested in. There are. 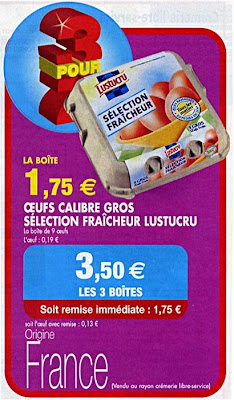 Neuf gros œufs !
Nine eggs? Isn't it funny how we get so set in our ways. In the U.S. at least, about the only way to buy eggs is by the dozen. Or the half-dozen. Here in France, in the supermarkets, the standard grade eggs come in a carton of 10. Or you can buy a carton of 6 of more the more expensive eggs. At the outdoor market one day, I asked if I could buy just 4 eggs. « Non, monsieur ! Six ! » was the answer. I don't think they sell 9 or 10 eggs at a time, but 6 or 12.

And then œuf is a funny word, at least for us English speakers. When it's in the singular, it's un œuf and you pronounce the final F — say something like [euh-`neuhf]. It's almost like the English word "enough" in fact, if you don't pronounce the first syllable as [ee].

But in the plural in French, you don't pronounce that final F. "Some eggs" is des œufs — [day-`zeuh]. And two eggs is deux œufs — [deuh-`zeuh]. I guess you've noticed, if you are following along, that you pronounce the final letter of the word that precedes œuf or œuf as part of the second word. It's complicated.

But what happened to 9? There's an extra complication. When you put the French word for nine — neuf — in front of a word that begins with a vowel, you need to pronounce that final F. But in reality you pronounce it as a V (for linguistic reasons — I will spare you the details). For example, "nine o'clock" in French is neuf heures — [neuh-`veuhr].

Sorry for the lame phonetic transcriptions, but it's hard with the characters available on a computer keyboard.

So "nine eggs" would be neuf œufs, right? And you would say [neuh-`veuh]. The F ends up sounding like a V, and the two vowels are identical.

I had a professor when I was in college — a linguist from Normandy whose native language was French — who was very interested in and amused by such language quirks. He would come to France in the summer and go to outdoor markets to try to get people the say neuf œufs because he thought it was funny.

Almost always, when he asked for nine eggs, the person replying would stick an adjective in between neuf and œufs — neuf beaux œufs, or neuf petits œufs, or neuf gros œufs. He said French people hesitated over the pronunciation of "nine eggs" otherwise.

If you are French-speaking, do you agree? Does neuf œufs make you stumble?