Getting our official traveling papers

After we sold the house in San Francisco, we needed to get our visas for the move to France and we needed to figure out how we were going to get permission to move with our 11-year-old dog, Collette. In fact, I had already started working on the process for the dog, but I wasn't having a lot of luck figuring it out. 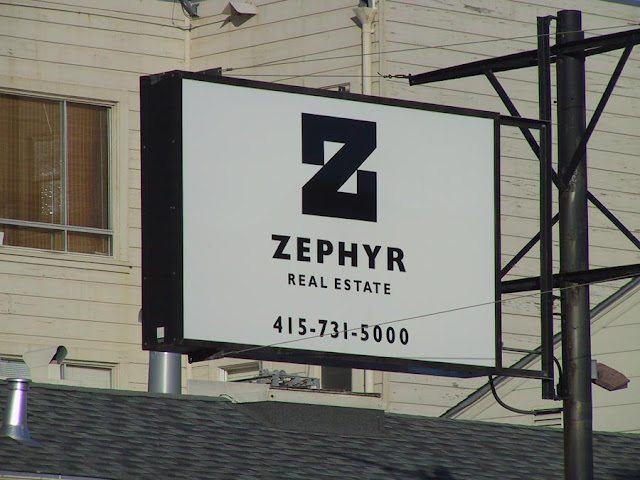 Our own visas were pretty straight-forward. We were lucky to have the French consulate for our region right in San Francisco, just two or three miles from where we lived. We got a list of the documents we needed to provide for the visa application by looking on the consulate's web site. We took them our birth certificates, which we translated into French, our passports, and proof of our financial resources. We gave them a copy of the letter showing that we were in the process of buying a house in France. The closing, called les signatures finales, was scheduled for mid-April.

The hardest part of the visa process was arranging for health insurance for ourselves in France. We found several companies that provides such coverage, but one of them turned me down. I don't know why. I was afraid nobody would want to cover a 54-year-old man like me, but then I did find a company that accepted my application. Walt didn't have any trouble. The French government required that we have private health insurance at the beginning. Since 2006 we have been on the French national health plan, which costs a lot less and covers a lot more. 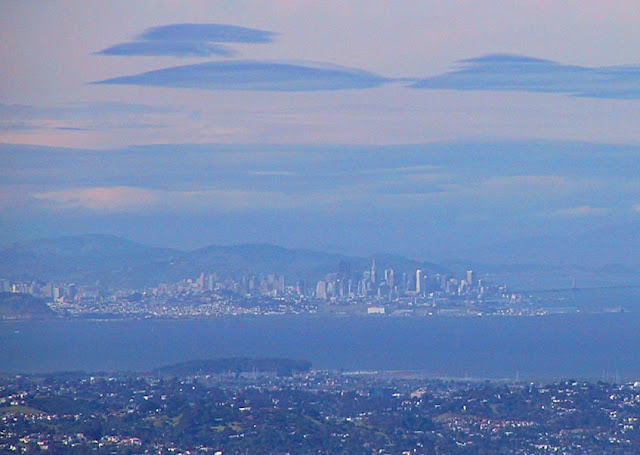 For us, San Francisco was fading into the past.

The people at the consulate told us the visa application would take two or even three months to be approved — if it was approved. It wasn't a sure thing, and that was stressful. We didn't know what we would do if the visas were denied for some reason. We'd do something, and we'd go ahead and buy the house in France anyway.

For the dog, I had made phone call after phone call to veterinarians and specialists in importing and exporting animals. One man in Florida gave me advice that seemed reasonable about getting a microchip implanted in Collette's neck and making sure she was vaccinated against rabies and other diseases. But he didn't know what kind of microchip the French customs agents at the Paris airport would actually be able to scan, because standards were in the process of being changed.

I called another specialist in Louisiana who told me the same thing. Without the right microchip, readable by the scanners used by French customs at the airport in Paris, the dog could be refused entry into the country. Before we could get the dog a blood test to prove she had the required level of rabies antibodies in her system, we had to have the chip implanted. That chip proves that the dog tested is actually the one you are traveling with. 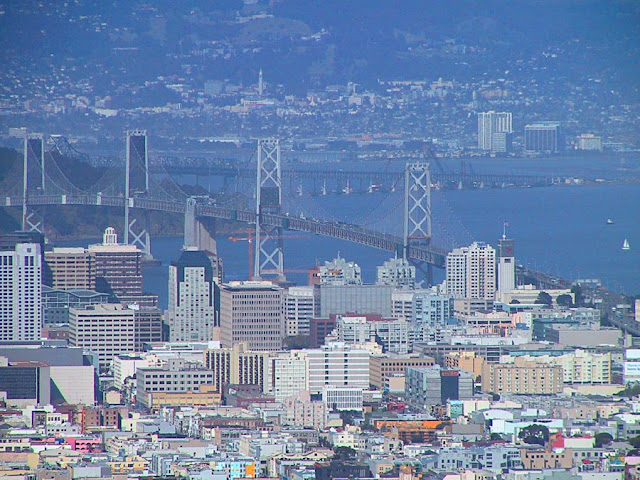 There was no bridge like this one to take us to France.

I called people in Texas and in California for more information and advice. Nobody knew exactly what the French requirements were, or what they would be three months later, since they were just being revised. But several of the American people I talked to mentioned a woman named Colette who lived near Paris and was an expert on questions of French requirements for importing dogs. I called her. The fact that she had the same name as our dog amused her. It turned out that she was British.

She got me on the right track. We said at the worst we could have the dog "chipped" and then buy the scanner that would read that particular chip. It would cost a couple of hundred dollars and we could travel with the chipped dog and the hand-held scanner. That would meet French customs requirements. 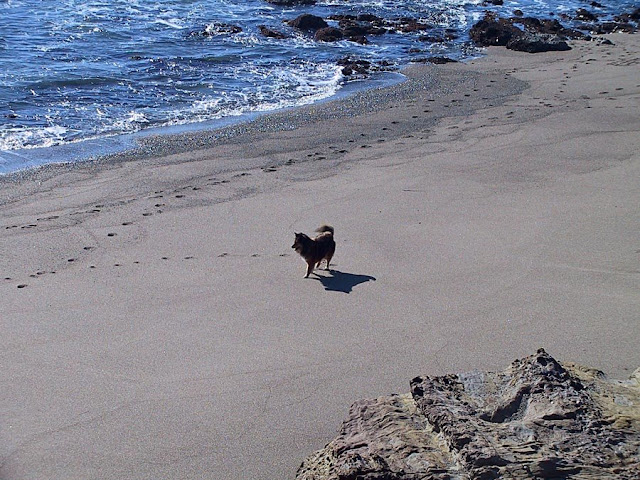 Collette on a California beach in March 2003

She also said that if the dog was rejected by customs at the airport in Paris, one of two things could happen. They could put the dog on the next plane back to the U.S. What would we do if that happened? Nobody would be there to pick her up. Or, worst case, French customs would be within its rights to euthanize the dog at the airport. So it was important to get it all right.

There were several waiting periods involved in clearing the dog for rabies. First she had to be vaccinated. That had been done in January. A month after that, the vet would draw a blood sample and send it off to a laboratory for analysis to make sure the vaccine had taken effect and that sufficient rabies antibodies were present in the dog's bloodstream. If the test came back positive, there was a mandatory three-month waiting period before the dog could travel to France.

It was February and time to send the blood sample. The laboratory approved for such testing by the US Dept. of Agriculture, which French law required to stamp all the dog's papers, was at Kansas State University, if I remember correctly. After a couple of weeks, the results came back positive. Collette, and we, would be able to travel in late May or over the summer. If too much time went by before we left, we'd have to start the whole process over again. 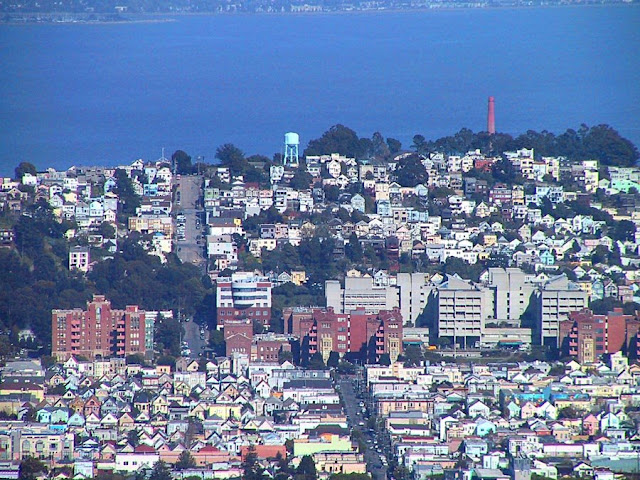 One S.F. neighborhood we lived in for a while was Potrero Hill.

I asked Colette in France if she would come to the airport to meet Collette the dog, just to make sure there were no problems on arrival. She said she could do that, and that she knew the customs people at Charles de Gaulle airport and they knew her. That was reassuring. But then when I e-mailed her all the dog's papers and she realized that Walt and I would be traveling on the same flight as Collette, arriving with her, she said there was no need for her to be there. Everything would be fine, she assured us. And she wouldn't accept any payment from me for all the time and trouble she had taken giving me information and reviewing documents.

The people who bought our house in San Francisco asked us to vacate the premises on March 20. I had imagined that we would have three more months there, not just one. That gave us just a few weeks to arrange for our belongings to be packed up for shipping. It was a scramble. We contracted with Allied International movers. They did an inventory, advised us to trim down the amount of stuff we wanted to ship, and told us it would cost $8,000 to ship a small container (20' x 8' x 8'). We continued trying to sell some pieces of furniture and we gave some to charities and others to friends. 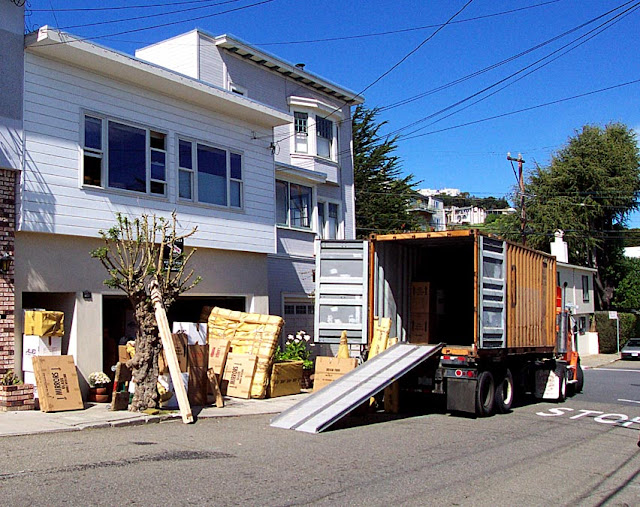 We couldn't complete the visa application process until after the sale of the house was final on March 20 or so, because we needed to be able to show the French consulate that we actually had the money we needed in the bank. Luckily, our good friend Cheryl had agreed to let us and the dog come stay at her house as long as we needed to while we waited for the visas to be approved. It might take as long as three months, they had told us.
Posted by Ken Broadhurst at 07:40