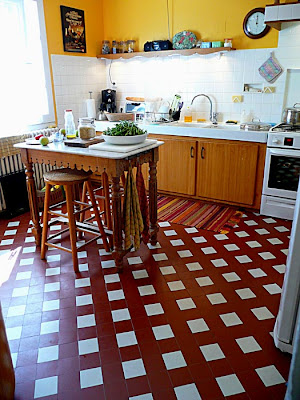 The kitchen floor is ceramic tile.
Notice the big bowl of green beans from the garden.
I'm about ready to pull out the tomato plants. September has turned out to be too wet. It's either too cool and raining, or warm and still wet and humid. 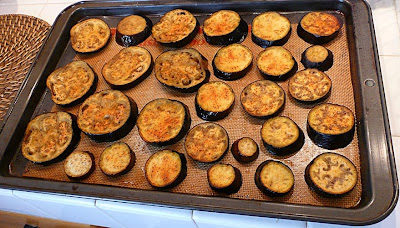 Eggplant slices roasted in the oven until golden
Yesterday I went out to pick some tomatoes for pizzas Walt was going to make. There aren't that many ripe ones. I picked about 10, and most of them were suffering. Some even had fuzzy white mildew growing on them. 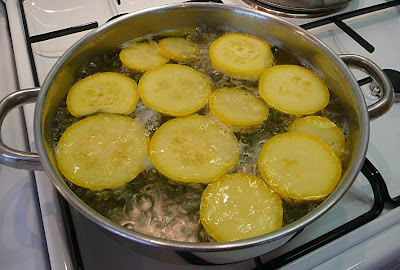 Blanching thick slices of yellow squash
There are a few eggplants and we are still getting loads of haricots verts and green and yellow summer squash. But so much for the tomatoes, and I'm not sure about the eggplant and the bell peppers. 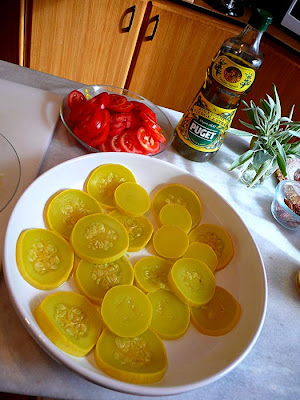 Blanched squash, tomatoes, and olive oil for a gratin
Last week we did get enough eggplants to make a summery gratin. I also cut up a big yellow squash and made a gratin with that. Tomatoes — the few I could gather — went into both, along with some comté, some mozzarella, and, on the squash, some Babybel cheese. 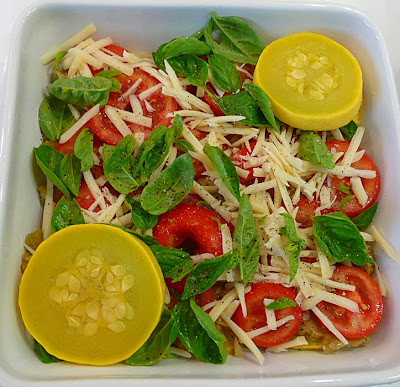 Putting the gratin together: squash,
tomatoes, cheese, and basil leaves
Eggplants need to be partially cooked before they go into the gratin dish. The best way is to put them on a cookie sheet, paint them with a little olive oil, and put them in a hot oven. When they just start to get golden brown, take them out and let them cool. 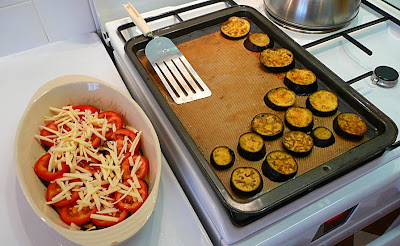 Putting the eggplant gratin together
It's also better to cook the squash before making it into a gratin. We usually just blanch the slices in salted boiling water for 3 or 4 minutes.

The two dishes ready to go into the oven
Once the main vegetables are pre-cooked, you just make layers with raw sliced tomatoes and cheese, plus any herbs you want to put in. Salt and pepper everything, and add some mashed garlic if you like it. 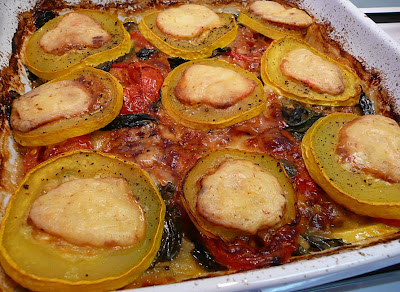 The cooked squash gratin
Then cook the gratins in a hot oven until the cheese melts and browns on top. Don't cover them — the want any water that the vegetables exude to evaporate as much as possible. 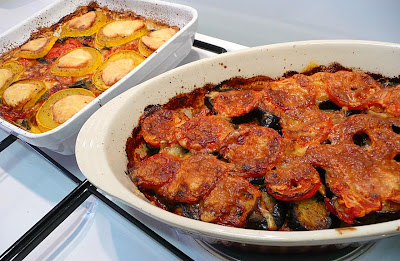 Even though the garden turned into a disappointment this month, we at least have had the pleasure of making and eating a few dishes of this type. Gratins and pizzas are fine summer food. And we have put a ton of squash and a ton of green beans in the freezer for the winter.
Posted by Ken Broadhurst at 08:23