It's 12ºC and raining this morning. That's 54ºF. Brrrr. Yesterday's high was 15.5ºC, or 60ºF. Re-brrrrr. Feels a lot like fall. The tomatoes will never finish ripening at such temperatures. 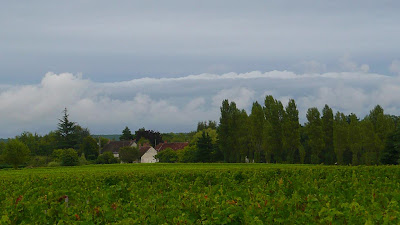 Rainclouds over the hamlet
Yesterday was the day when I could enjoy breaking the fast that began last Saturday evening. That's when I started eating a lot of chicken soup and not much else. By the way, there is no such thing as Jello here, so that's not part of the pre-colonoscopy diet.

(It's interesting that the French word for the procedure is côloscopie, one syllable shorter than in English. The French dictionary shows the first O of the word with a circumflex accent on it but the documents the hospital and doctors gave me didn't include that accent mark. It is true that colon in French is côlon, which distinguishes it from colon = colonist.) 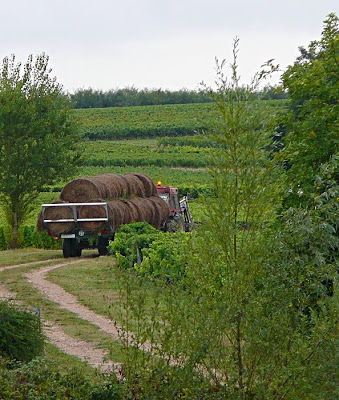 Hauling a load of hay out through the vineyard in the rain
The pre-colonocopy diet I was told to follow lasted 48 hours, not the 24 hours some of you have told me you were required to do in the U.S. I had the procedure done in San Francisco when I turned 50 years old, but I don't remember any details about it.

So what was the French pre-test diet? The doctor gave me a list of foods that he said I was "authorized" to eat during those 48 hours. This was called the régime sans résidu:
The foods I was asked to avoid eating were:
I ate mostly chicken broth with either rice or potatoes cooked in it, along with some of the chicken meat shredded and chopped into the soup. The chicken was poached so I figured it was okay. Thank goodness we DON'T have Jello here!

And yes, I had the procedure done under general anesthesia. That wasn't my choice, but theirs. And I was in the hospital for 7 hours, not two. They brought me a lunch of vegetables and fish at about 1:00. When I got home, I had one more bowl of my chicken soup, this time with some diced cooked carrots and celery added to the broth to make it a little more interesting. 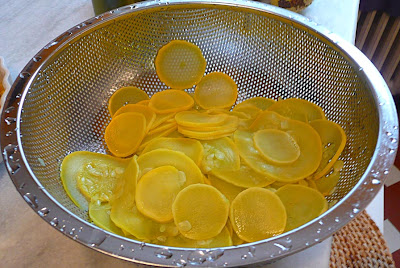 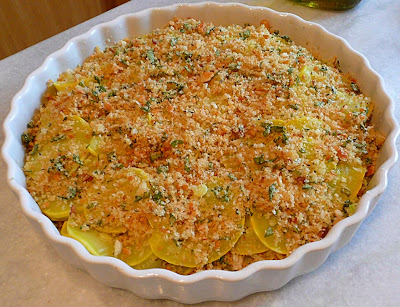 Layers of squash and herbed breadcrumbs
Cut thin slices of zucchini or yellow squash. Blanch them in boiling salted water for a few minutes. Arrange a layer of the slices in the bottom of a baking dish. Mix breadcrumbs with a little olive oil to slightly moisten them. Mix in some chopped fresh sage and some salt and pepper. Spread a layer of crumbs over the squash slices. Spread a layer of grated parmesan cheese over the crumbs. 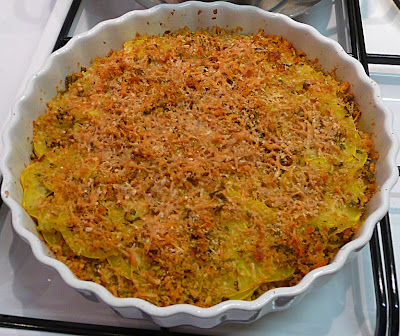 The squash gratin, topped with
parmesan cheese, browned in a hot oven
Repeat this procedure twice more, making three such layers in the pan. Bake in a hot oven to heat the dish through, melt the cheese, and brown the top surface. This is very good eaten hot, warm, or cold. It's a variation on a recipe I saw in the Joy of Cooking.

To accompany the squash gratin, I cooked a pork roast. I put a rolled boneless pork shoulder in a very hot oven, on a rack, until it was nicely browned all over. Meanwhile, I cooked some chopped onions, carrots, and garlic in olive oil in a frying pan, with salt and pepper of course. I deglazed that pan with some white wine and some chicken broth (the broth I had eaten so much of over the weekend) so that I had about a cup or a cup-and-a-half of liquid. 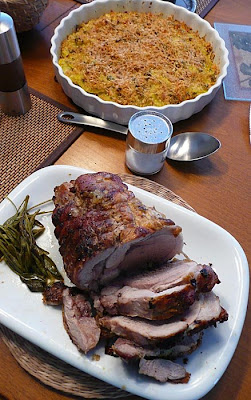 Breaking the fast in a big way...
When it was well browned, I put the pork roast into a deep baking dish and I poured the liquid over it. I put at least two dozen, maybe more, fresh sage leaves in the dish with it. And then I baked it, covered with foil with a few holes poked in it for ventilation, for about two hours in a medium oven. Let the roast rest for 30 minutes when it comes out of the oven. (Cook the squash in the oven during that time.) Then slice the roast and enjoy it all.
Posted by Ken Broadhurst at 08:22