"Found food." Doesn't sound very appetizing, does it? "Free food." That doesn't sound much better, and some would say there's no such thing.

I found a lot of apples on the ground a couple of days ago. We had had a windy rain squall go over the evening before. These are the red apples from a tree that has never before produced quite as many apples as it has this year.

Since the apples had just fallen a few hours before, I went out and picked up the best of them. Many had slugs on them, or had been partially eaten by squirrels, I guess. I rejected those. But enough apples were in perfect condition for me to do something with them.

I made jelly. I had three kilograms of apples, and that made me more than three liters of jelly. Walt will use a lot of it to glaze the tarts he makes. 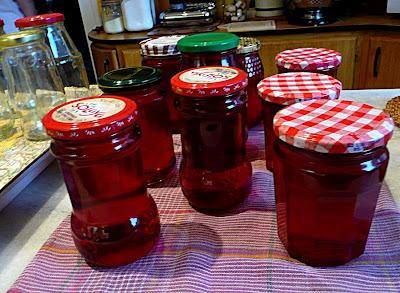 Gelée de pommes
Then yesterday afternoon, just after finishing the process of getting the apple jelly sealed up in sterilized jars, I took Callie out for a walk and found some more food. We were walking down a row through the parcel of vines on the north side of the house. I noticed that those vines were freshly groomed. The grooming is done by machine. 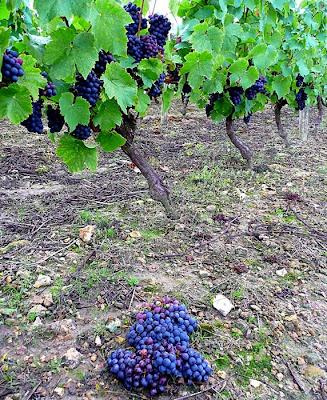 Grapes I've found, lying on the ground.
I've become a scavenger.
And there on the ground was a beautiful bunch of dark purple grapes, in perfect condition. Just lying there. I scooped them up. And then I found several more bunches, so I scooped those up too. Pretty soon I had a big double-handful, balanced precariously. I couldn't carry any more.

Luckily we were close to the house and and the end of our walk, especially since it was starting to rain. I was able to get the back gate open, using my wrists and elbows, without dropping the grapes on the ground. Same with the back door, as it started to rain harder. Callie was right behind me. 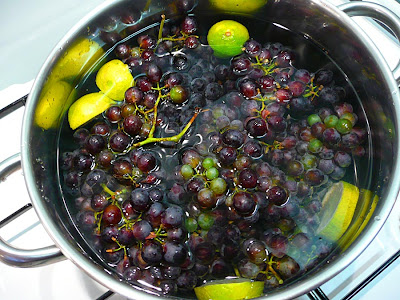 On that same walk, I also found some ripe peaches on the ground in our neighbors' yard. The neighbors have gone back to Blois for the winter, and they've told me before to pick or pick up any fruit I find over there. We ate the peaches raw. Delicious. That was after having fresh figs for dessert after lunch. We "found" the figs at the supermarket.
Posted by Ken Broadhurst at 07:32