On Monday morning we hit the road with our friend Sue about 9:30 and headed up toward Normandy in the Peugeot. First we drove over to Tours on local roads, and there we picked up the autoroute that now is open from Tours to Rouen, passing near Le Mans and the big Norman town called Alençon along the way. We ourselves were headed not to Rouen, but west to the Mont-Saint-Michel along little roads from the little town of Sées. 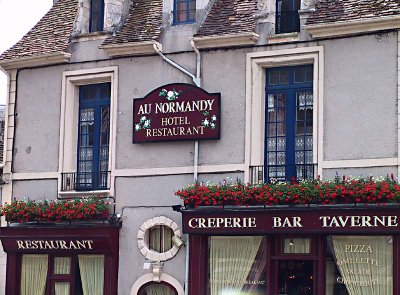 A hotel-bar-restaurant on the main square at Sées
At about noon, we arrived in Sées (pop. 4,500), just 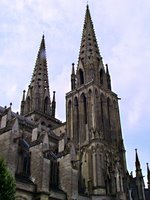 north of Alençon. In Sées there is an enormous gothic cathedral and there are several religious communities and two seminaries. The Michelin Green Guide describes Sées as a "quiet old cathedral town" and its cathedral as "one of the finest examples of 13C and 14C Norman Gothic."

The Michelin guide also points out that there are "magnificent" 13th-century stained glass windows in the Sées cathedral, but the windows were placed too high up in the walls for me to be able to photograph them well. 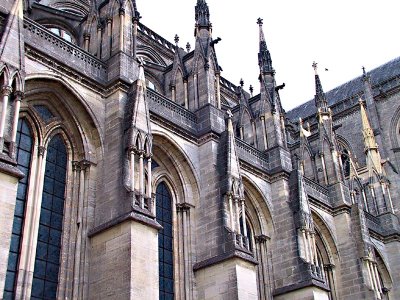 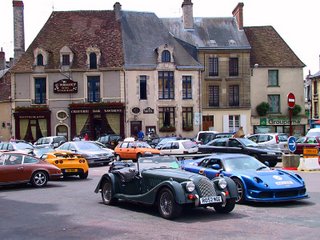 We stopped in Sées to see the cathedral of course (So what did Sue see in Sées? You say Sue saw the church in Sées?) but we also needed to stop in a supermarket to buy some sandwich bread for the picnic lunch we were planning to have out in the country near, we hoped, one of the local châteaus -- the Château d'O, the Château de Sassy, and the Château de Carrouges.

Sées was anything but quiet when we arrived on the main square just after noon. It was full of British people who had arrived in sports cars and were noisily drinking beer and whooping it up in the sidewalk cafés. We had seen the sports cars on the autoroute between Le Mans and Alençon. It turns out that the big 24-hour Le Mans automobile race had taken place over the weekend, and all these British people were leaving via autoroute to return to the U.K. 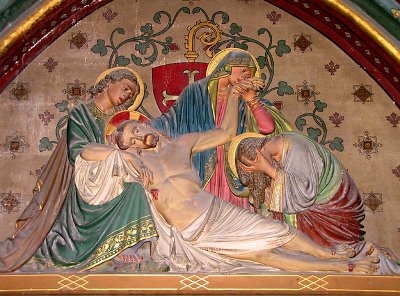 Inside Sées Cathedral
It started as we were driving along at the speed limit, 130 kph/80 mph. Suddenly we were 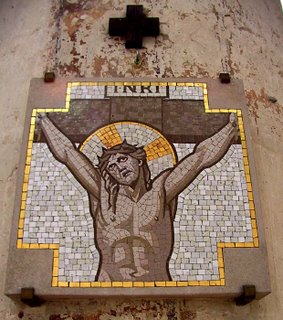 passed by a line of sports cars with British licence plates on them and drivers sitting on the "wrong" side of the car. There were Porsches, Maseratis, Ferraris, Audis, BMWs, and little English cars we didn't recognize, and they were all driving at about 100 miles an hour. There were several dozen British cars in the fast-moving caravan.

When we left the autoroute at Sées, there were toll-takers stationed at each tollgate, even the ones where you normally pay by credit card. Walt leaned out the window and asked the young guy standing there in his electric green security vest if he knew why so many English people were on the road.

"They're leaving Le Mans today after seeing the race and returning home. We're here because 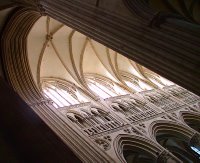 so many of them need to pay cash at the toll booth, and need help figuring out how to feed money into the machines," he said in French.

"Yes, a lot of them are being stopped by the gendarmes and escorted off the road," the French guy said. "One driver was clocked at 237 kph just a few minutes ago." 237 kph is 147 mph! 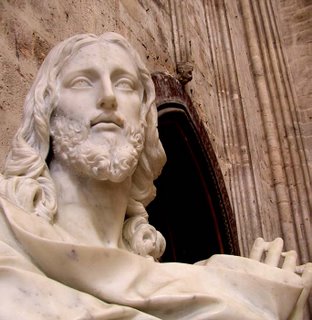 Because Europe is not yet fully united and integrated and standard-
ized, the problem of foreigners speeding on French highways is a difficult one for the French authorities. The gendarmes can stop a British or German car for speeding, but they can't put points on the 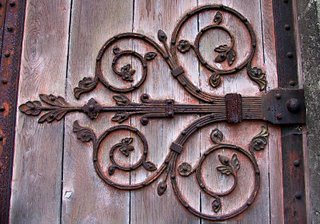 foreign driver's license. I assume it's the same in all the EU countries. So foreign drivers can be required to pay a fine, but they can then leave the country and incur no further penalty for their reckless driving.

I don't know why so many of the Brits had left the autoroute at Sées to have lunch. Maybe the crowd of enthusiasts who go to the Le Mans race know it is a good place to stop, with several cafés and restaurants on the main square, near the cathedral. Alençon, just a few miles south, is a much bigger town, and maybe a lot of other British race fans had stopped there too. 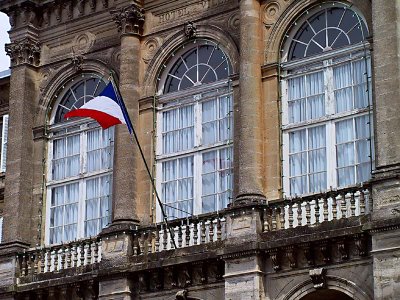 The Sées town hall is also located on the main square, across from the cathedral
We spent some time taking pictures in and around the church, as you 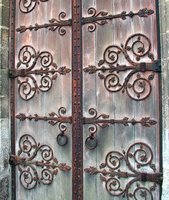 can see. We were successful in finding an Intermarché that was still open, but just barely. It was closing up for the two-hour lunch break when we arrived, but we were able to duck in and buy a loaf of sandwich bread and a bag of potato chips to fill out our lunch menu. We had quiche, lettuce, tomatoes, cheese, sliced ham, wine, and fruit juice in a cooler in the car. 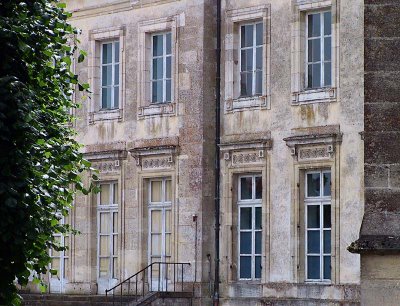 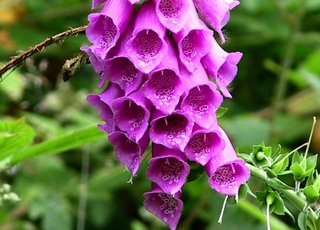 Finally, we turned off the main road that was taking us toward Carrouges and happened upon a picnic area along the side of a little road way out in the country. It was perfect, though it started raining just as we were finishing our lunch. You have to expect rain in Normandy, so all was going according to plan.

Next we would visit Carrouges...
Posted by Ken Broadhurst at 08:45