March 31, a rainy day on the rue Montorgueil, a market street near Les Halles in Paris. The shops are all inviting because they are brightly lit, full of beautiful products, and a refuge from the steady rain. Here's a poissonnerie — a fish market. It's always fun to take pictures of the fish and shellfish, even if you don't intend to buy anything.

Rue Montorgueil is an extension of the rue Poissonnière, the old route that fish merchants took over the centuries from Dieppe and other fishing ports in Normandy to get to the central marketplace, Les Halles, in Paris. Les Halles was transferred to a site outside the city about 35 years ago, but several fish mongers maintain shops along the old route, which includes the rue Montorgueil. 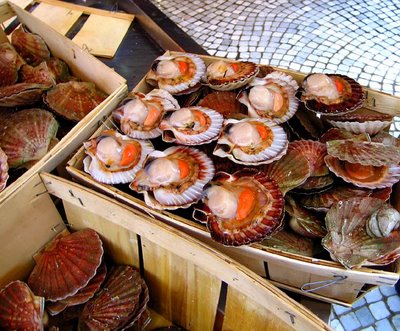 One of the delicacies available in France but not in the U.S. is the variety of scallops called coquilles St-Jacques. In France, the orange roe in the shell is eaten along with the white muscle. In the U.S., the roe is either absent in our varieties of scallops, or it is thrown away in the cleaning process. 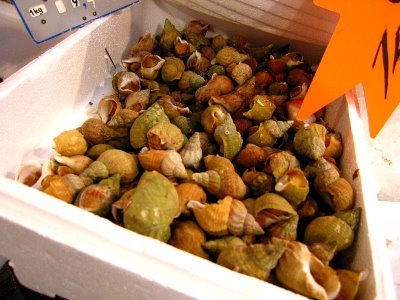 Another Norman specialty is the sea snails called bulots. They're sold cooked — steamed. You eat them by removing the animal from its shell with a pick or little fork. They are served cold with mayonnaise. 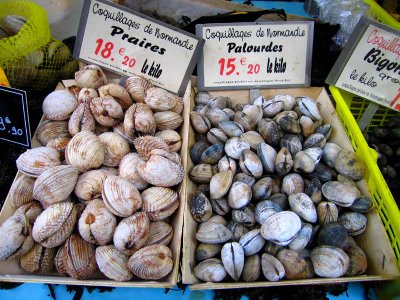 These praires and palourdes are varieties of what we would call clams in the U.S.

It's interesting how cooking and food products have changed over the 35 years that I have been coming to France on a regular basis. For example, I have a book called La Cuisine du poisson by H.-P. Pellaprat (another book of his used to be commonly known as Le Pellaprat — I don't know if it is the same text). My copy is dated 2001, but I remember that a French friend had a copy back when I was in graduate shcool, in 1972 or '73. So the book has been around for a long time. This classic of French cookery has about 10 recipes for preparing coquilles St-Jacques, but not one for anything resembling clams, or even bulots. I think these were exclusively regional specialties until more recent years. 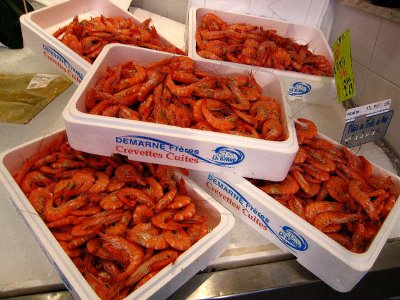 The Pellaprat also has no recipes for cooking shrimp (crevettes). One thing I miss here in France, in fact, is being able to buy uncooked shrimp (even frozen). They are hard to find, at least out here in the country, but cooked ones are plentiful. Here's my translation of what the Pellaprat has to say about crevettes:


Crevettes are most often enjoyed just as they are as an hors-d'œuvre, but one can also serve them hot, either in pastry or tart shells, or in clam shells, with an appropriate sauce and mixed as desired with mushrooms or fish dumplings, which cut the shrimps' saltiness. I only mention this in passing, because the mistress of the house won't often need to prepare such dishes. 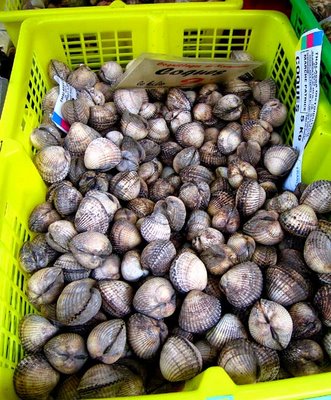 Here's something you don't see much in the U.S., as far as I know: cockles (coques). Again, there's no mention of them in the Pellaprat. The Larousse Gastronomique, another classic of French cooking, says cockles are called huîtres des pauvres — "the poor man's oyster". So you know what that means: buy oysters instead. Larousse also notes that they are eaten raw or prepared according the the methods used to cook mussels. 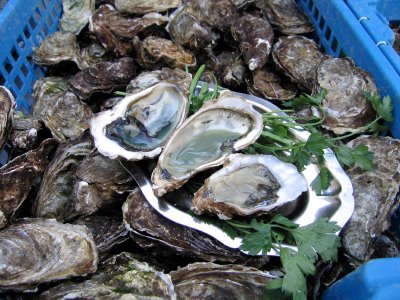 Speaking of oysters... they are plentiful in France. They are farmed in the cold waters of Normandy, Brittany, and down the Atlantic Coast to points south of Bordeaux. They are fattened in salt ponds along the shore before being gathered and taken to market. 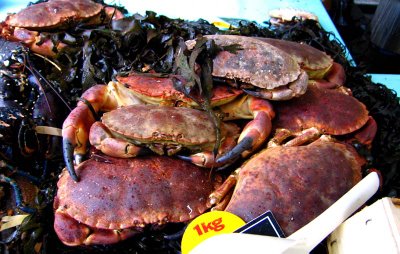 
Culinarily, crabs can be prepared according to all the methods used to cook lobsters. It is appropriate, however, to point out that even the largest crab contains only a small quantity of edible flesh. But the liver of these crustaceans is fairly large, and eaten with the creamy substance that surrounds it, it is full of flavor. Along with the claw meat, that's about all that is edible in a crab.

Not a ringing endorsement, I'd say. Pellaprat is a little more generous, and gives five recipes. 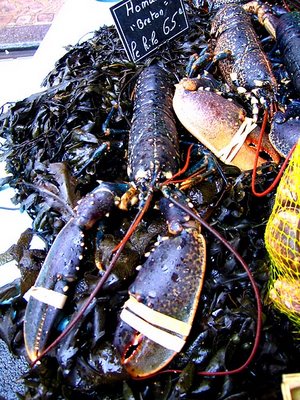 Obviously, it's better to buy a lobster (homard) if you can afford one. In France, they come from the waters off Brittany. Pellaprat gives nine recipes for homard and nine more for its cousin, la langouste or spiny lobster. The Larousse Gastronomique says that langouste is more digestible than homard, even though homard has better flavor and a firmer texture. The lobster in the picture above sells for 65 euros a kilo — that's nearly $40 a pound at current exchange rates. 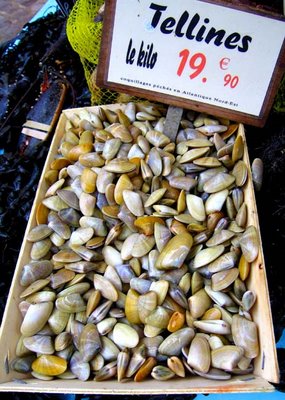 Tellines are a Mediterranean specialty, evidently. Neither Pellaprat nor Larousse mentions them. We have similar-looking bivalves along the southeast U.S. coast that we call coquina. In North Carolina, I've heard of people making coquina chowder or soup, but I've never known anybody who did. I suppose you could do the same with tellines in France, or you could follow this recipe. 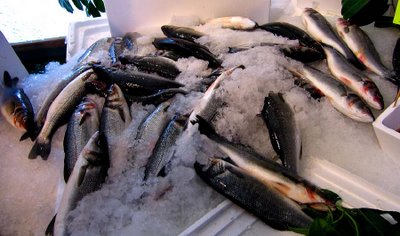 The poissoniers along the rue Montorgueil in Paris also sell fin fish, of course. These are salmons (saumons). They are probably farm-raised in Norway or Scotland. 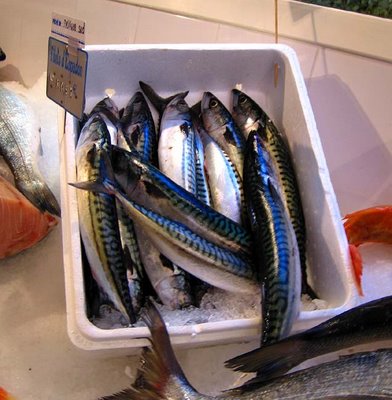 These are mackerels (maquereaux). Fish in France is often cooked a served whole, head and all. I've never heard a French person complain about the fish looking back at you while you're eating it, but I've heard that complaint from more than a few Americans. 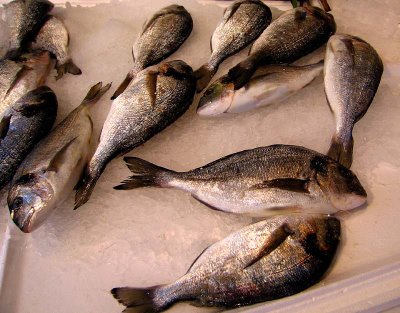 I think these are called dorades, or dorado in English(!). It's hard to know what fish in France corresponds to what fish in the U.S., because the names are often locally specific in each country. These dorades look a little like what we called hogfish when I was growing up in North Carolina. We caught, cleaned, cooked, and ate them often. 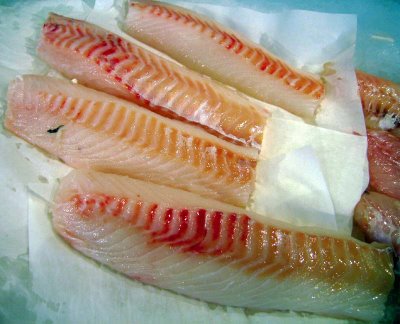 It seems that most people prefer fish filets. Most serious cooks will tell you, however, that cooking fish on the bone — and meat too, for that matter — give a more flavorful result. I read recently that American restaurant customers want to be served boneless meat and fish more than ever nowadays. They don't want to have anything left on the plate when they finish eating. To me, that's just another step in the evolution that has separated Americans from their food sources and opened the door to more processed, pre-cooked foods (including fast food) rather than real cooking. That's my two cents. 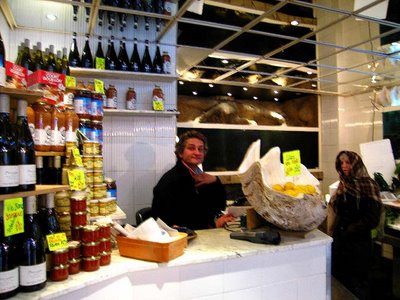 After I had taken a picture or two in the fish market on Montorgueil, I realized I should have asked permission. I did, and the man at the desk said he didn't mind as long as I took his picture too. So I snapped his portrait. Here he is with a customer.