You might have heard about the student protests in France recently. The Sorbonne was occupied, and then there were large demonstrations in many cities. The protests have to do with government policy reforms that will affect young people. The government wants to make it easier for companies to hire and fire employees. The protestors want more job security. That's the gist of it.

This has turned into a stand-off between the pro-business government and pro-employee factions (students, unions, the political left). It is leading up to a general strike that is planned for next Tuesday and will affect the whole country.

Yesterday I was in Saint-Aignan with my friends and saw that the protests have reached as far as this small town. Here's a photo of a demonstration outside the Saint-Aignan city hall. 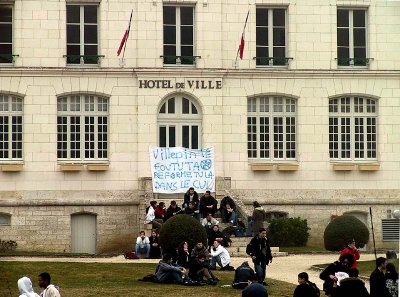 Demonstration, March 21, 2006, in Saint-Aignan-sur-Cher
The banner across the front door says, in a polite translation: "Villepin (he's the prime minister), you're done for. You can take your reform and shove it."
Posted by Ken Broadhurst at 10:18