Over the weekend Mme V. called and invited us to come for lunch on Wednesday at her new apartment in Blois. Mme V. is the woman who recently sold her house in the country to friends of ours from California. We met her last September, and this was the first time she had invited us over to her place. She had lived in the country, 10 miles south of Saint-Aignan, for eight years, after a career in the Paris area. She decided last year to leave the country, where she was lonely, and move to the “city.”

To my eyes, Blois doesn't really qualify as a city. It is a large town, population 75,000 or so. That said, it is the biggest town in our département, and is the administrative capital.

Panorama of Blois taken from the south bank of the Loire river
(click on the picture to see a larger view)
We drove up to Blois yesterday morning. Weather reports called for snow, but it was bright and sunny when we left Saint-Aignan at 11:00 a.m. We stopped at the Intermarché in Contres to fill the fuel tank and buy a bouquet of flowers to present to Mme V. when we arrived at her house.

It takes about 45 minutes to drive to Blois from our house. It’s only 25 miles, but you have to drive through the middle of several towns and villages along the way — Saint-Romain, Couddes, Contres, Cormeray, and Cellettes — so it’s slow going. There always seems to be some road works project going on as well, so that slows you down. 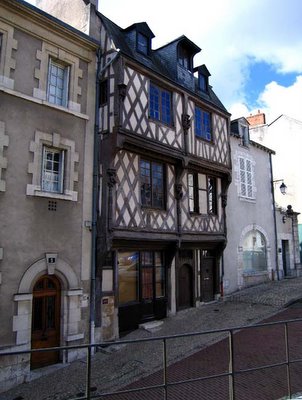 An old half-timbered house near the cathedral and,
below, architectural details from the same house 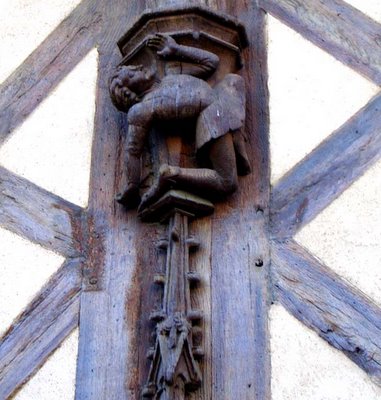 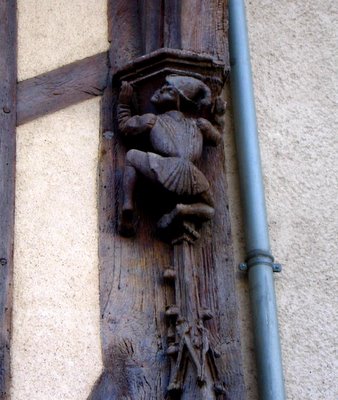 The town of Saint-Romain, a wine village, has been redoing its main street for more than a year now, putting in stone curbs and dozens and dozens of head-in parking spaces along the road. It’s a small village with no tourist attractions or supermarkets, so I don’t know who they think will ever park there.

Contres is a town (population 3,000, maybe) with a very narrow main street that is also the highway to Blois. If two big trucks try to pass at the same time, the roadway is too narrow and sometimes one driver has to back up and let the other pass through the narrow section before he can proceed. It happens more often than you’d think, and it ties up traffic for a few minutes. There is no bypass around the town. 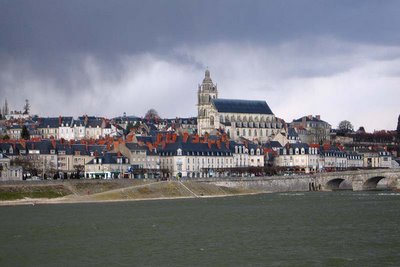 Central Blois, with the cathedral dominating the old town.
By afternoon, clouds had rolled in and there were snow showers.
In Cellettes, closer to Blois, there’s a big canvas banner strung across the road with a message saying that 15,000 vehicles pass through there every day and demanding that a bypass be built to take traffic out of the center of the town.

Anyway, we made it to Blois in the usual amount of time. There’s a big road construction project going on there too, on the east side of town, which is how we get into town. That is another bottleneck. 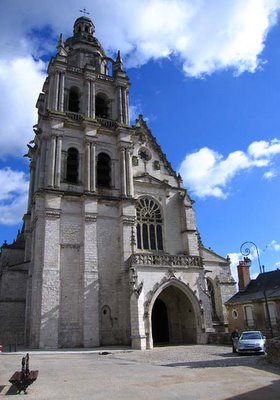 La Cathédrale St-Louis à Blois
Mme Vallée lives near the cathedral in the old part of Blois. We hadn’t been to her apartment before. She just moved in December. I wasn’t sure what kind of building it would be. Somehow I had in my head that it would be a modern apartment in a fairly new building. But it wasn’t. It’s a nice old stone building, as you can see in the pictures posted here.

We parked near the cathedral, at the top of the hill, at noon. We hadn’t studied the map carefully enough, and we ended up walking down the wrong street, all the way to the bottom. We realized our mistake and had to walk all the way back up on a steep, cobblestone street. 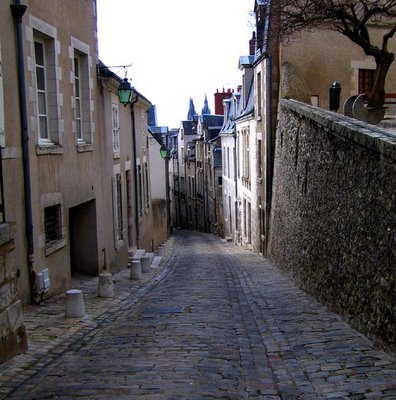 This is the street we had to walk up after we got lost.
Mme. V. has a very nice old apartment. From the living room window, there’s a fine view out over the rooftops of the old town, down to the Loire and the town’s old bridge. The window faces south, so it’s very bright, and you can see the horizon on the other side of the Loire, which is nice. 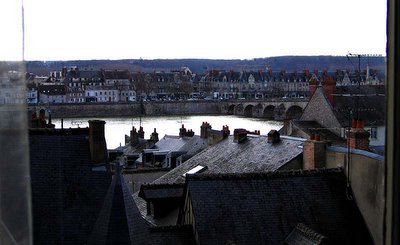 The view from the living room window in the apartment
There were four of us for lunch. Mme V. had invited a friend named Mireille who lives near Montrichard but is thinking about selling her house and buying one in Chinon, on the other side of Tours. 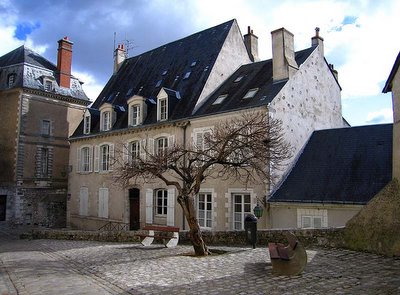 This is the building our friend's apartment is in
We had a kir as an apéritif before Mme V. served lunch. Lunch itself started with an appetizer of céleri rémoulade (shredded celery root in a mustard sauce) and sliced avocados. The main course was braised beef with mushrooms and potatoes. Then came salad and a couple of cheeses (one a local goat cheese, the other a comté or gruyère from the Alps). Dessert was an apple tart Mme V. made. She spread some cherry preserves over the top to glaze the apples. It was all very good, I thought. Oh, and the wine was a 1993 St-Emilion from the Bordeaux area. We had coffee after dessert. This was a very typical French meal.

Mme V. seems happy in her apartment, and it is beautiful, but she says she misses being in the country. In Blois, she says, she can walk to the cinema, as well as to a couple of theatres to see plays. She can also walk to the train station and catch the train to Paris, which is less than two hours distant. She has children and grandchildren who live there, near Vincennes. Her daughter-in-law is American.

Blois is an old royal town. There is an enormous château, which was built over the centuries and includes buildings and wings in a variety of architectural styles -- medieval, Gothic, Renaissance, and Classical. The cathedral was almost completely destroyed by a violent windstorm in 1678, according to the Michelin Guide, and rebuilt in Gothic style. City hall and a big rose garden are located just behind the cathrdral, and from there you get great views of the town and the river. 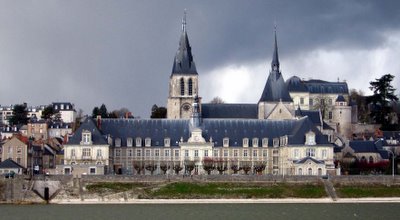 The Eglise St-Nicolas and an old convent on the banks of the Loire in Blois
I’m just starting to discover Blois, after living here for nearly three years. Up to now, it has seemed to me to be a large town with all the disadvantages of a city -- traffic, mainly -- but few of the advantages. Maybe it’s because our trips to Blois often involve going to the train station on the edge of town to pick people up or drop them off, to the police headquarters to get our residency papers, to the big shopping center in what is charmingly called the zone industrielle south of town, and to the hospital to visit friends who are ill. And just getting to Blois sometimes feels like a chore, as I described above.

Last August we had lunch with our other friends who live in Blois but own the house across the street from us. They took us on a walk around the old town in the afternoon. I was surprised to see the steep old cobblestone streets and the panoramic views. We also had a very nice Thanksgiving dinner at another friend's house in Blois. The town has a lot more charm than I had realized.
Posted by Ken Broadhurst at 10:25