Thanks to an unsuspecting neighbor in the Southwinds Condominiums complex here on the North Carolina coast, I am able to connect to a wireless network and blog this evening.

The North Carolina coast is where I grew up. In October, when the wind turns to the north and the first cool days of the fall make themselves felt, the people here in Carteret County, NC, describe the weather as a "mullet blow." The jumping mullets begin their coastal migration, and the local fisherman put out their nets to catch as many as they can. 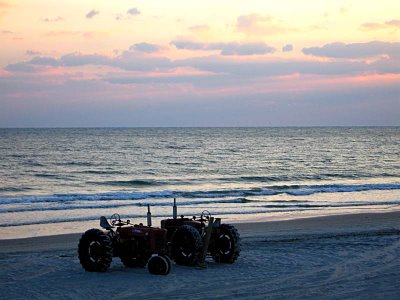 Tractors left to spend the night alone on the beach

They use tractors to haul in the nets, and they use shovels to throw as many mullet as they can from the nets into the beds of their pickup trucks or trailers. The nets were out today, and there were two tractors and seven or eight trucks out on the beach in front of the Southwinds complex. 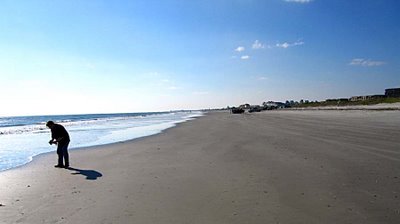 Walt taking pictures on the beach in North Carolina, 23 October 2006

Besides the trucks and tractors and their drivers, the only other people on the beach were a few late-season stragglers looking for seashells. And me and Walt, taking pictures.

A couple of hours after our mid-afternoon beach stroll, I walked back over to the shore to see if the nets had been hauled in. They hadn't. Maybe tomorrow. There was a beautiful sunset. It reminded me of Saint-Aignan sunsets, which I am eager to see again. 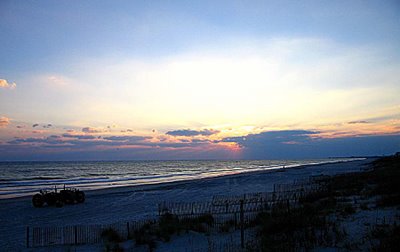 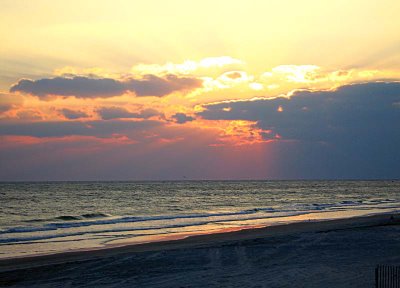 A closeup of the same sunset

I wonder what the sunset at La Renaudière looked like today. We will return there two weeks from tomorrow...
Posted by Ken Broadhurst at 04:11