Changes in the weather

During our time on the N.C. coast, we had nearly every type of weather you can imagine. At the beginning, it was so muggy that we couldn't believe it. It wasn't particularly hot, except at night. But you felt like you were swimming through the atmosphere.

The second week, the weather turned chilly and clear. That was during the "mullet blow." Since the beach runs east-west in Carteret County, a north wind flattens out the water and there's almost no surf. The water is a deep blue, reflecting the color of the clear sky.

Last Friday morning, storm clouds rolled in from the southwest. When we woke up at about 7:00 a.m., we could hear the surf for the first time all week. We decided to walk down to the beach to see what the water looked like.

Well, there was a magnificent sunrise under way. I could see the lighthouse in silhouette on the horizon. Within 10 minutes, the clouds had moved east and the sun had risen just a little more, so the show was over. 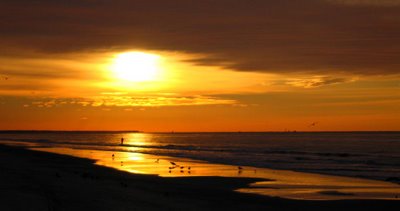 By noon, it started to rain. The wind got stronger and stronger as the day progressed. The storm turned into a real sou'wester (as opposed to a nor'easter). In a sou'wester, the wind is warm and it churns up the ocean, making the water rough and the surf impressive. 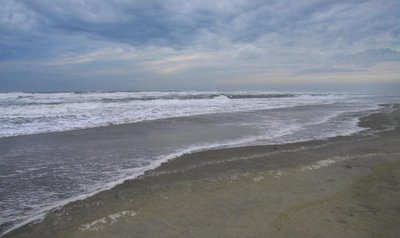 The N.C. beach during a good sou'wester storm 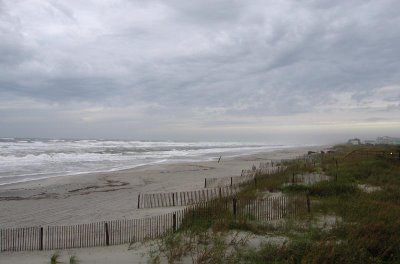 Looking southwest over the beach just as the storm moved in

In the picture above, you can see that the prevailing wind on the Carteret County coast is from the southwest, because the sand fences are set up to catch sand blowing from that direction. 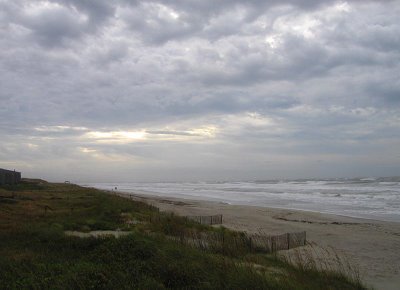 Looking southeast toward Cape Lookout and the lighthouse

Contrast the picture above with the ones I took a day or two earlier from the same spot — especially this one. 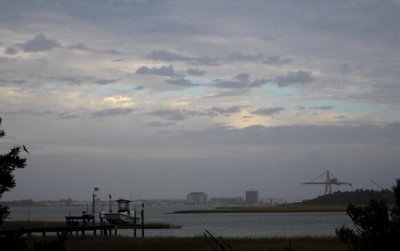 A view back toward the mainland showing the Morehead City waterfront

We are in Alabama today, visiting good friends. By the end of the week we'll be in Illinois, and we will fly back to France from Chicago next Sunday.
Posted by Ken Broadhurst at 23:58