More about artwork and travels in the north tomorrow and the following days. Yesterday we spent a quiet but busy day in Saint-Aignan. We all needed and deserved the rest, and that includes Walt, who sanded the walls upstairs, mowed the lawn, walked the dog twice a day, and tended the garden all by himself while I was on the road. 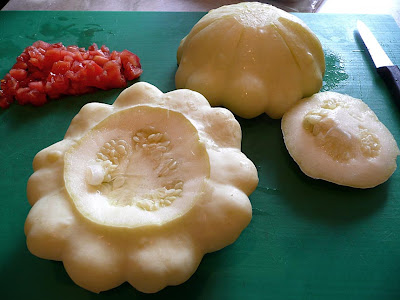 Hollow out the steamed patty-pan squash and
peel, seed, and dice a tomato.
We got two big patty-pan squashes out of the garden over the last couple of days. They were begging to be cooked, and they looked like a kind of squash that could be farci (stuffed) with a good result. Walt said he had eaten one earlier in the week that he cooked by steaming it, and that sounded like a good idea — so I did it too. 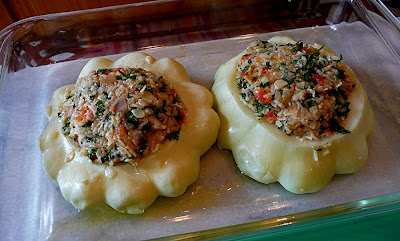 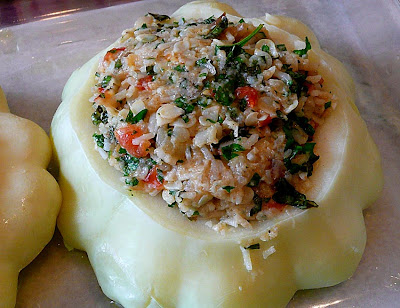 A closer view
The two squashes just barely fit in the steamer basket (une marguerite in French, because it has a shape like a daisy) in the bottom of our biggest stock pot. They steamed for 15 or 20 minutes, until they were soft enough for me to be able to cut out the center and scoop out the flesh. It would be better to let them cool first, but I didn't have time. I burned my fingers. 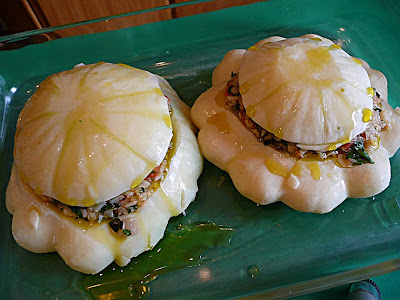 Put the "caps" back on over the stuffing and
drizzle on some olive oil before baking.
The stuffing was improvised. Chop up a shallot or a small onion and sauté it in some olive oil. Add the scooped-out squash flesh, a diced tomato, and five cloves of garlic, pressed or finely chopped. Let all that cook together until it dries out and begins to stick to the pan. At the last minute, add a cupful of cooked rice, some salt and pepper, a little (smoked) paprika, and a big bunch of herbs, chopped. Parsley and basil are good but other herbs could be good too. 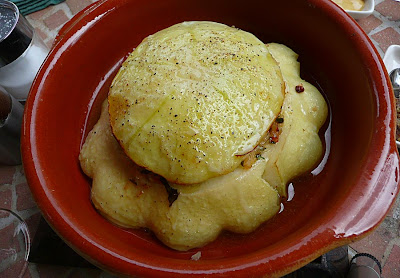 Here's one fresh out of the oven, in a serving dish.
Take the stuffing off the heat and when it has cooled slightly, mix in a half a cup or more of finely grated parmesan (or other) cheese. Spoon the stuffing into the hollowed-out patty-pan squash shells. It doesn't matter much, by the way, if in the scooping-out process you end up making a hole in the bottom of the squash. The stuffing is not liquid and it will hold together. 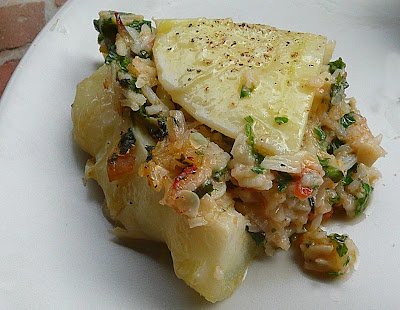 Sliced into wedges, it's ready to eat.
Don't forget the grated cheese.
Put the "caps" back on the stuffed squashes. Drizzle some olive oil over them, and grind some black pepper over them if you want. Set them side by side in a big baking dish and put them in the oven at 400ºF/200ºC for 15 or 20 minutes until they look done. Everything is already cooked, so they won't take too long. If you've let the stuffed squashes cool completely before putting them in the oven, bake them longer at a lower temperature so that they will heat through without scorching. 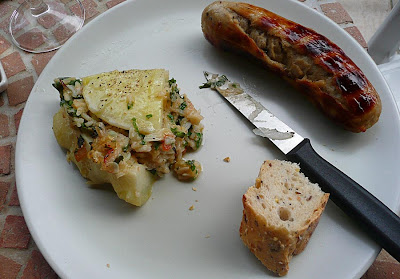 Stuffed squash with a turkey sausage
and some whole-grain bread
That's it. Cut each squash into four or even six wedges and serve. We had ours with grilled boudins blancs (white poultry sausages in this case) that contained chopped ceps (cèpes in French, Boletus edulis in Latin), which are also called porcini mushrooms in some countries.

The stuffed squash and sausages were a good combo, but serve the stuffed patty-pans with whatever you want, or have them as a main course. the patty-pan squash tastes a little bit like an artichoke.
Posted by Ken Broadhurst at 07:44