They say Neufchâtel is one of the oldest cheeses in Normandy. That's what I read in a blurb in the brochure the hotel leaves in every room. It says Neufchâtel cheese has been made since at least 1035. It was granted the Appellation d'Origine Contrôlé (A.O.C.) label in 1969.

After checking out of the hotel Thursday morning and having a look around in the town's church, CHM and I drove out to the edge of Neufchâtel to buy some cheese at the Monnier farm. It is just up a gravel road off the highway that leads to the town called Forges-les-Eaux, across the road from a SuperU supermarket. 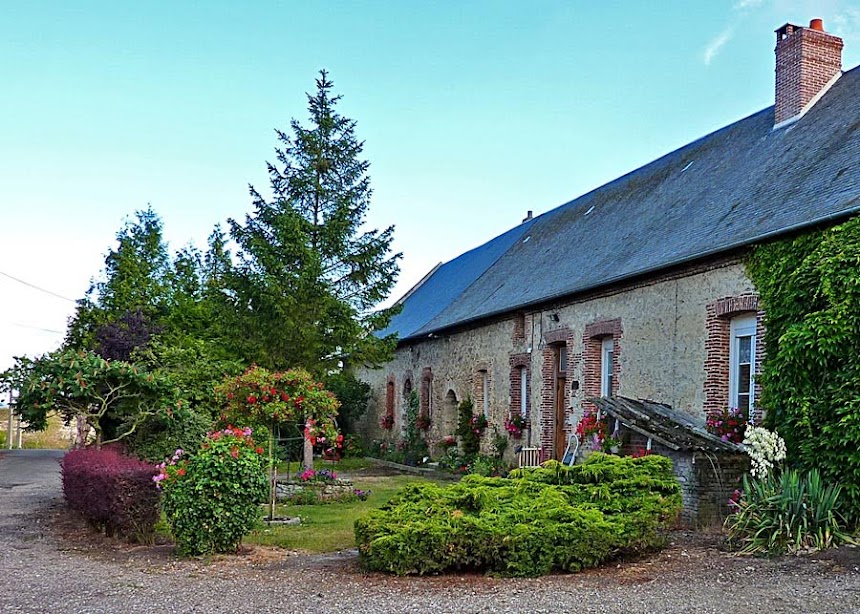 Florence and Philippe Monnier make cheese
on their farm outside Neufchâtel-en-Bray.

There are cows grazing in a pasture between the road and the farm complex, which is made up of two long buildings on either side of a kind of courtyard, with flowers and some greenery. At the far end of the courtyard there's a white sheet-metal building where the cheese is made and aged. Madame Monnier (I presume it was her) was working in there, in a white lab coat and a hairnet, and she was happy to sell me some cheeses. 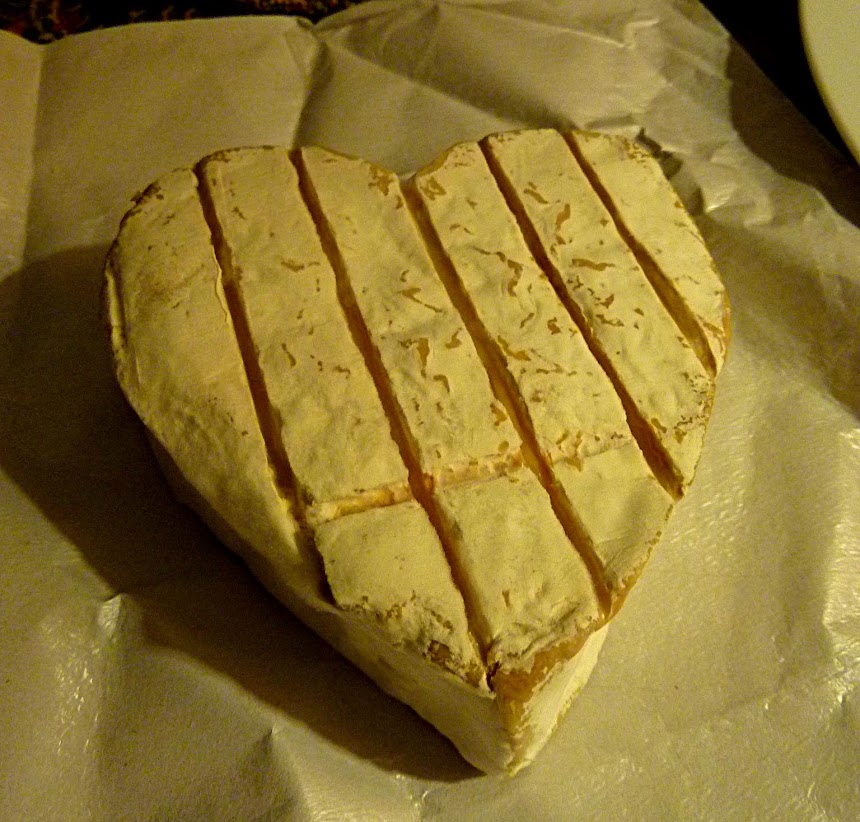 The best-known Neufchâtel cheese is this heart-shaped one.

We went into the back room, where there were hundreds of cheeses drying on stainless steel racks. The Monniers make two styles of Neufchâtel: briquettes (flat rectangular shapes) and cœurs (the better-known heart shape). It's the same cheese. The Neufchâtel cheeses I can buy in Saint-Aignan are the cœurs. 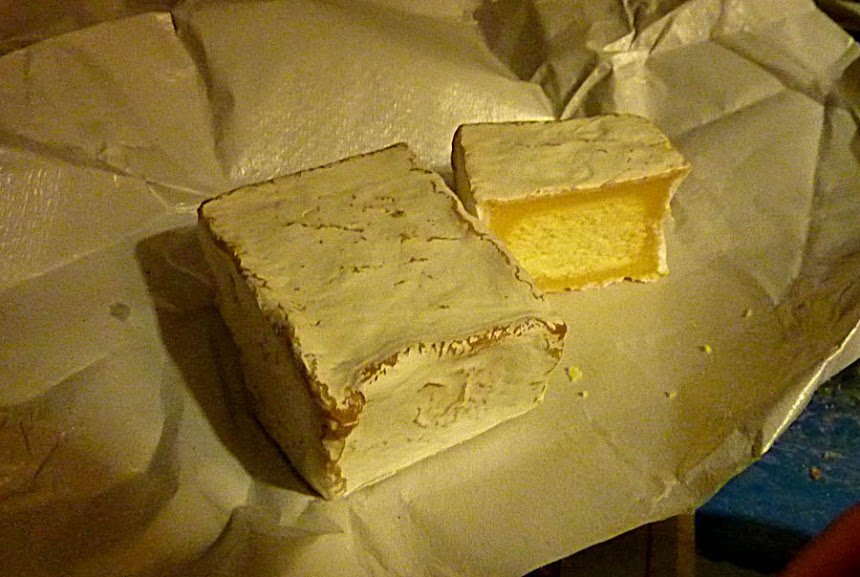 This is the shape that Florence Monnier called a briquette.

I bought three Neufchâtel cheeses to bring back to Paris (and take back to Saint-Aignan this afternoon). Madame Monnier charged me three euros for the three cheeses. CHM and I cut into one of the briquettes for dinner last night, and it was really good. CHM said he thought in was better than the cheese we had at the Brasserie Chez Jean-Pierre in Neufchâtel Wednesday evening. It was fresher and creamier. 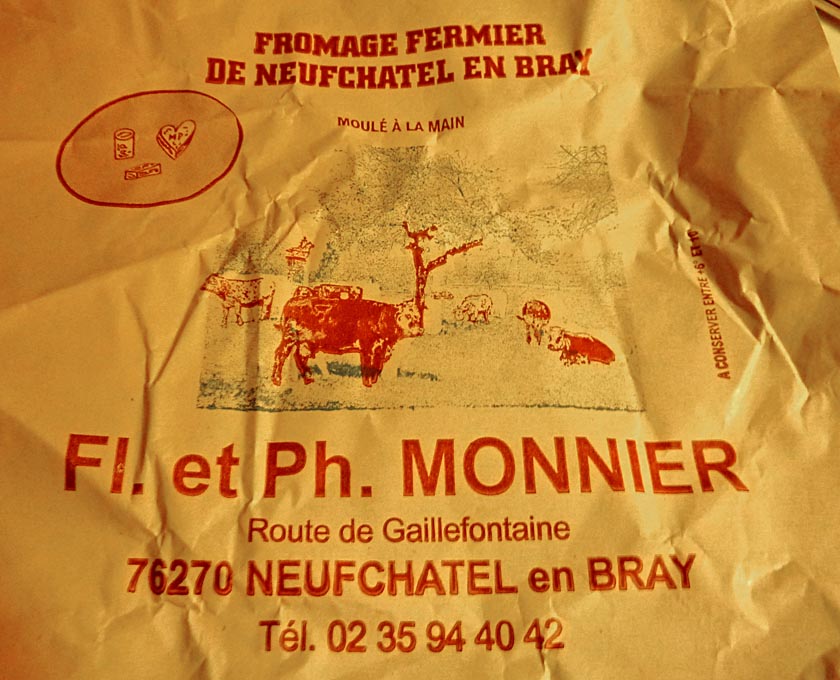 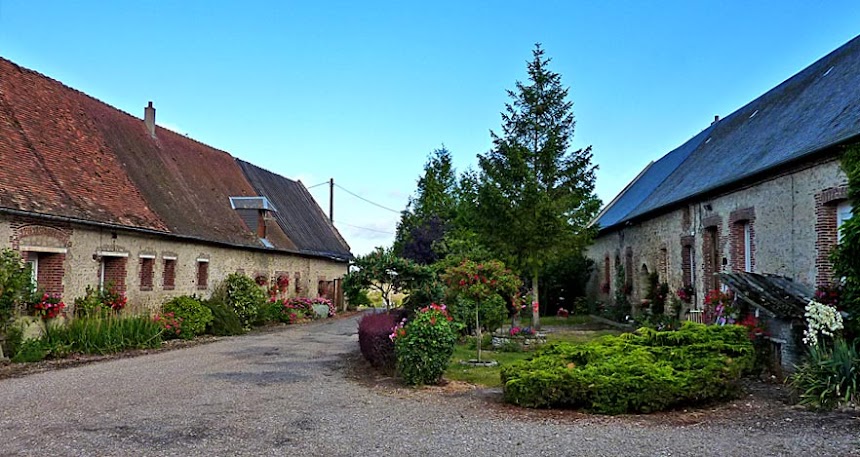 This is the Monnier farm's courtyard. I think the building
on the left must be the barn. On the right is the farmhouse.

We spent yesterday afternoon in Rouen, where CHM met with the curator of the city's Musée des Beaux Arts and donated to the museum's collections a pen-and-ink drawing of Joan of Arc that his grandfather did in 1899. The curator, a man I would estimate to be 40 or maybe 45 years old, was very impressed with the work. He examined it carefully and said it was magnificent. 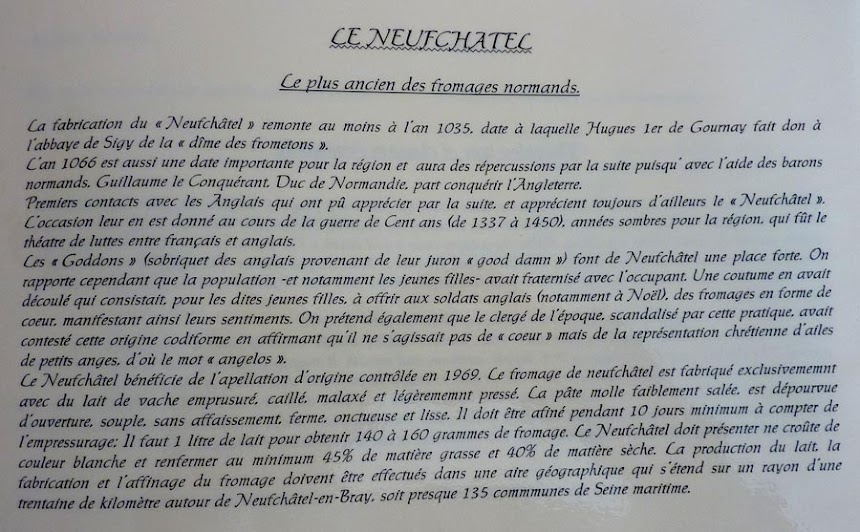 Here's the blurb about Neufchâtel and the cheese
from the hotel brochure. There are lot of mistakes
in the French, but tant pis.

Then the curator took us over to the Tour Jeanne d'Arc, which is supposed by many to be the place where Joan was held prisoner before being burned at the stake in Rouen's main marketplace in 1431. Up in the tower hangs a painting of Joan of Arc that CHM's grandfather did before he died in 1905. Last year I posted a photo of one of CHM's grandfather's paintings that hangs in the chapel at the Château de Blois.

I have many pictures from our afternoon in Rouen, and I'll try to post some over the next few weeks. I always enjoy going back there. I lived in Rouen for nine months in 1972-73, when I worked as an English-language teaching assistant at the Lycée Corneille there. Before going to the museum, we had lunch in a brasserie next to the cathedral with my friend Marie, who lives in Rouen and is an English teacher.

Like the rest of the trip, the day was a big success.
Posted by Ken Broadhurst at 09:38