Who would have thought it was so easy it is to make one of my favorite French bakery items, les croissants aux amandes — almond croissants. Thanks to Clotilde of Chocolate & Zucchini for the recipe and to SuperU for the good, affordable croissants.

I knew that almond croissants were the way a French baker uses up the croissants he didn't sell the day before. I had talked to our bread delivery lady, Roselyne, about it a few months ago. She told me that the boulanger in our village doesn't make very many croissants every day, and usually he sells them all. On the rare day when he has some left over, he makes them into croissants aux amandes the next morning. 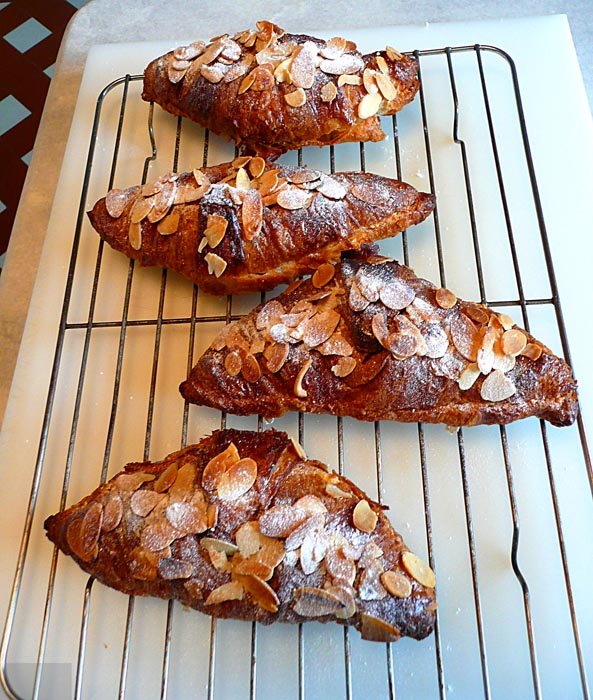 I didn't take pictures while I was making the croissants
aux amandes, but just of the finished product.
Some people get indignant when you tell them that such a delicacy is made from remaindered pastry. "Not the ones I buy!" they insist. "They are made fresh!" Wrong. As our baker says, you can't make almond croissants with fresh pastry. It's too delicate. It needs to be "hardened" for 24 hours before you can work with it.

Clotilde's recipe on C&Z (link above) is very good. However, I found that when I made the almond creme according to her instructions, I had about three times as much as I needed to fill the four croissants that her recipe calls for. If you make them, use at least eight French-size croissants (Americans ones are often bigger, it's true) or just cut the almond creme recipe in half. Half would have been a gracious plenty.

The almond creme is very simple to make, by the way. You just mix together almond powder, sugar, softened butter, and eggs. Add a pinch of salt. That's it. Then you split open day-old croissants lengthwise and fill them with the creme, like little sandwiches.

One of the biggest debates about almond croissants is whether they should be crispy or soft. I lean toward crispy, because soft can all too quickly become soggy. One reason for sogginess, I think, is the instruction that says the split croissants should be dipped or even soaked in a sugar syrup before they are filled.

Besides, that's too much sugar for me. What I did after making the little croissan'wiches out of my day-old pastries was just brush the tops with sugar syrup. That's enough so that you can stick on some slivered almonds. Then you bake the croissants in the oven until the almonds on top start to brown and the almond creme filling sets up and cooks through. Finally, sprinkle the croissants with a little powdered sugar as they cool on a rack. 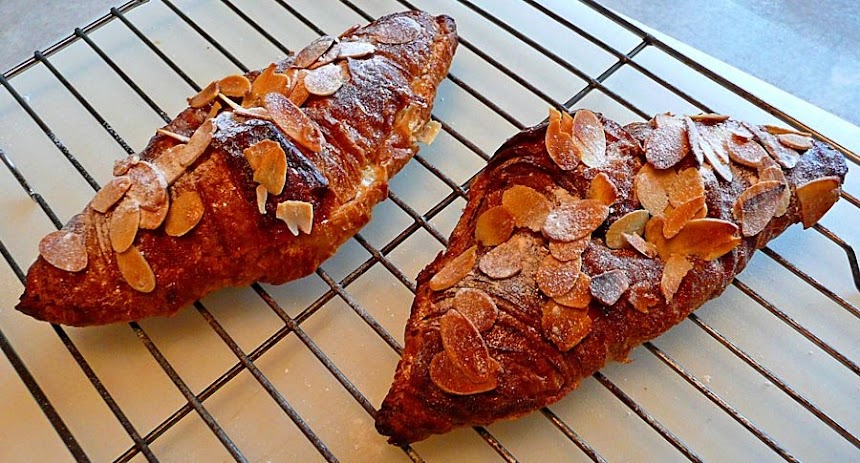 Like magic, two of the croissants disappeared
right before our very eyes!
I got my croissants from SuperU. Now you might think that you wouldn't get the highest quality croissants from a supermarket, but then again you are going to make almond croissants out of them. The ones I got were labeled pur beurre — pure butter — so I thought they would do. And the bag of eight croissants was just €1.99. How can you resist a price like that?

In fact, the croissants were so good by themselves that we ended up eating four of them before I could even get my act together to turn some of them into croissants aux amandes.

Comfort foods like these are some consolation on distressing days like today. No, it's not raining. We even saw the sun rise. But I just heard on the news that the euro is now worth $1.56. At this point, I think we can officially say that the dollar has crashed. Thanks, you-know-who.

For those of you who lived or traveled in France before 2002, that means the dollar is worth 4.2 French francs. Actually, that sounds a little better, though I would be a lot happier if the dollar were at five francs, as it was always supposed to be.
Posted by Ken Broadhurst at 07:48