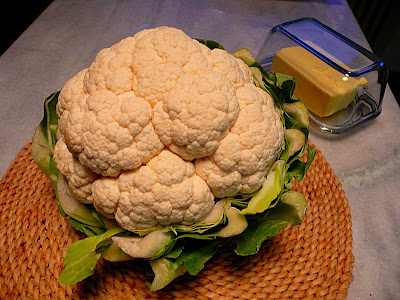 Fresh cauliflower
Cauliflower. It must be the season, because SuperU had them on special Saturday for €0.75 — seventy-five centimes d'euro. Earlier, cauliflower had been varying in price from €1.25 to €2.00 a head. One day back in February, though, SuperU did have them for one euro apiece or €1.60 if you bought two. I remember, because I bought two, but the cashier rang them up wrong. So I had to go to the customer service desk and ask for a refund. It was no problem. 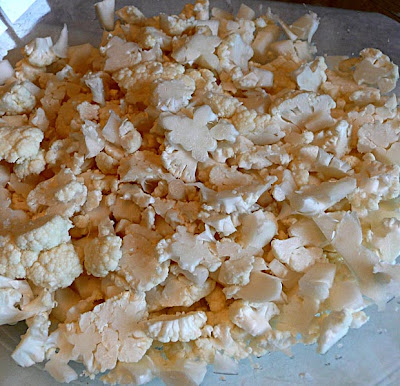 Cauliflower "shaved" and chopped into a crumble 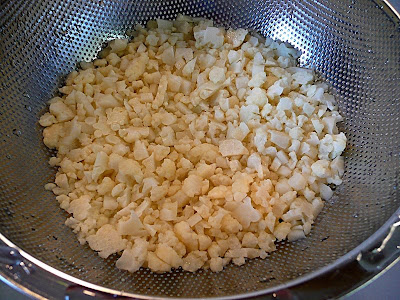 Blanche the cauliflower crumbs briefly in boiling salted water
before adding them to the cheese sauce.
I just looked at the big Larousse Gastronomique food and recipe encyclopedia and it confirms the season. France produces enough choux-fleurs to satisfy domestic demand year-round, it says, but March is when they are most plentiful. A lot of cauliflower is grown in Brittany and in southeastern France. I bet French people eat a lot more of it per capita than Americans do.

(The little bit of searching on the Internet I just did suggests that American consume between 2 and 2½ lbs. (1 kg) of cauliflower a year. Per capita French consumption is something like 3.5 kg (7¾ lbs.) per year, and that figure has dropped over the past 10 years as people have started eating more broccoli and romanesco. I'm not sure if romanesco is available in the U.S.) 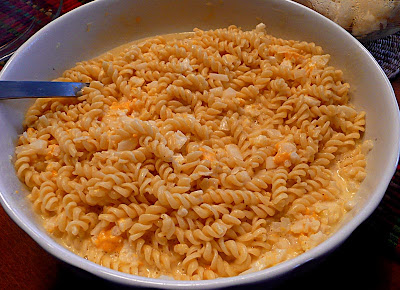 Pasta in a cheese sauce (sauce Mornay)
with the crumbled chou-fleur
The recipe I had in mind when I saw cauliflower on sale was the one I mentioned before and that I had in a restaurant in Half Moon Bay years ago. It was "crumbled" cauliflower in a light cheese sauce served over pasta. It was, obviously, memorable — a little bit crunchy in the sauce, which was rich and smooth, and good with the pasta. 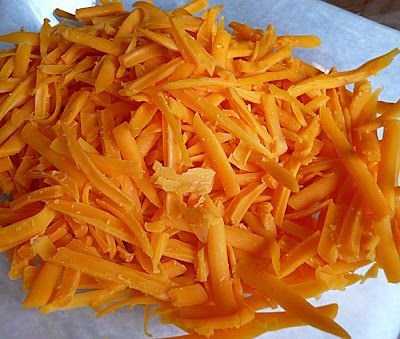 Grated Mimolette cheese from Holland
I had very high expectations because my memory was so vivid, and I had no recipe. But never let that stop you when you want something good to eat, some comfort food on a blustery, chilly, gray, rainy March day. 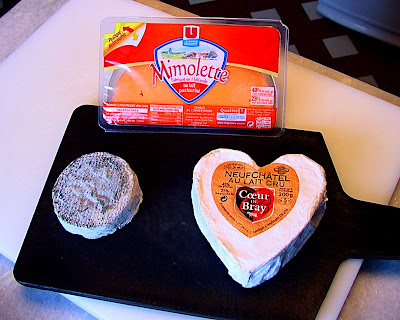 Three cheeses — Mimolette from Holland; a heart-shaped
Neufchâtel from Normandy; and a disk of aged goat cheese
made by my neighbors on the other side of the vineyard
I think I used the wrong cheese for the sauce. I picked Mimolette cheese because it is about the only French cheese that has the orange-yellow color that I remembered from the restaurant's sauce. But in fact I got Dutch Mimolette cheese, and I know that some French gourmets systematically turn up their noses when cheeses from Holland are brought out. Maybe French-made Mimolette would have been better.

The problem with the cheese was that it didn't melt smoothly into the sauce. That was the effect I wanted, and instead I got clumps of molten cheese. It tasted great, but it didn't make the sauce smooth and velvety the way I wanted it. Next time I'll probably use French Cantal cheese, which, while white and not yellow, has the virtue of melting smoothly into a thick liquid, not an elastic, stringy clump. 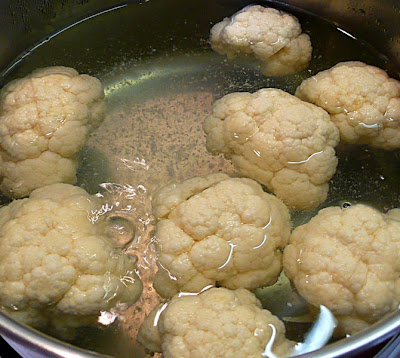 I like to cook cauliflower in a lot of boiling water —
but not for long, or it starts to smell and taste too strong
Also, I had a lot of cauliflower left over once I had shaved off the tops of the florets and chopped the tender stems to make my crumble of chou-fleur to put in the sauce. But that was all right — I just cooked the rest of it and served it with the pasta and sauce. I actually needed a little more sauce for the big pieces of cauliflower. Next time I'll make more.

One thing that made the dish even better was a good sprinkle of hot paprika over the top at the table. Another option would be to put some hot red pepper flakes into the sauce as it cooks.

And when we have the leftovers, I will add a layer of mimolette cheese over the pasta and cauliflower pieces and put the whole thing into a hot oven to make a gratin. It will be a variation on cauliflower au gratin, for which you normally make a much thicker cheese sauce using comté or gruyère cheese but no pasta. 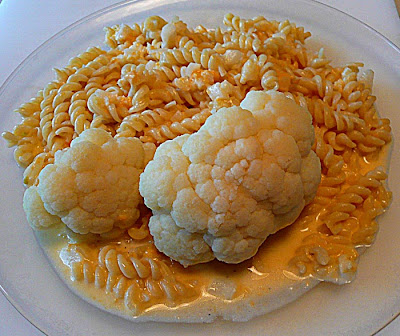 Pasta with cauliflower in a cheese sauce
There aren't that many ways to serve and eat cauliflower, I guess. Steamed or boiled cauliflower with butter, lemon-butter, or a cheese or cream sauce. Polish-style cauliflower is served with buttered bread crumbs, chopped parsely, and finely chopped hard-boiled egg sprinkled over it. And there is cream of cauliflower soup, of course. Or a soufflé.

Don't be afraid to undercook cauliflower because, after all, it is good to eat raw — especially with a good home-made mayonnaise dipping sauce. It's also good steamed and dressed with a vinaigrette dressing. Frozen cauliflower is good too, if you don't cook it too much.

I suppose I'd better take back what I just said about there not being very many ways to serve cauliflower. Peter Hertzmann has a lot of good cauliflower recipes on his A La Carte French-cooking site. And I was just looking at one of Madhur Jaffrey's books — World-of-the-East Vegetarian Cooking — where there are several recipes using typical Indian spices. Maybe an curried dish will be a good use for the second head of 75-cent cauliflower I bought.
Posted by Ken Broadhurst at 07:02