One of my favorite rice pudding recipes is this one (in French, it's a gâteau de riz or "rice cake"). You make the pudding on top of the stove and then you put it in a caramelized mold and let it set up in the refrigerator. I think a pyrex loaf pan makes a good mold, because with pyrex you can make the caramel in the microwave right in the loaf pan itself. An other way to do it would be to make the caramel in a saucepan on top of the stove and then pour it into the loaf pan.

The recipe doesn't have any eggs in it. It calls for milk, which I assume to be whole milk. Since I usually have only skim milk in the house, I always add some cream to enrich the pudding. This time, I put in 40 cl of liquid cream (30% butterfat) and 60 cl of skim milk (0% butterfat). 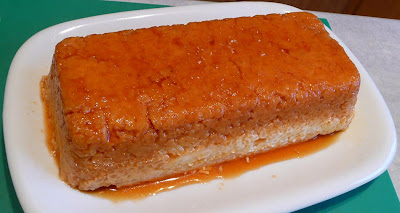 The caramel in the cake pan liquefies in contact
with the cooked rice mixture and gives good flavor.
The recipe also calls for a vanilla bean, but a teaspoon of American-style vanilla extract works just fine. I used riz rond — short-grain rice — because I like its texture cooked this way, but I'm sure long-grain rice would be good too. The recipe doesn't specify a type of rice.

Speaking of the recipe, it comes from the little Cuisine pour toute l'année cookbook written by a woman named Monique Maine and published in Paris in 1969. I use this book all the time. It's full of simple recipes that are quick and easy to make. Here's the rice pudding recipe: 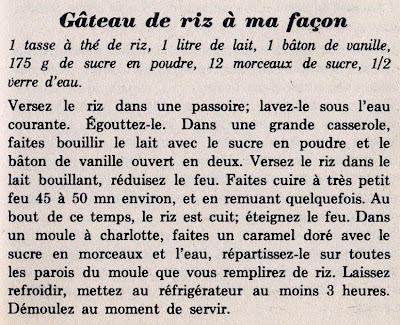 And a fairly literal translation:

Pour the rice into a strainer; wash it under running water. Drain it. In a big saucepan, boil the milk with the granulated sugar and the vanilla bean, split open. Pour the rice into the boiling milk, turn down the heat. Cook on very low heat for about 45 to 50 minutes, stirring once in a while. At the end of this time, the rice is cooked; turn off the heat. In a high-sided cake mold, make a golden caramel sauce using the 12 sugar lumps and the water, spread it all over the bottom and sides of the mold, which you will fill with rice. Let it cool, put it in the refrigerator for at least 3 hours. Unmold when ready to serve.

Finally, here is the recipe in American format: 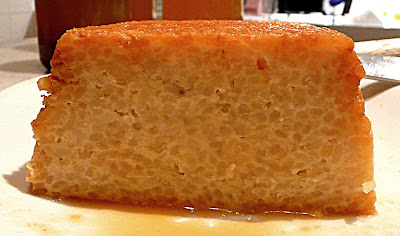 To caramelize the mold:
4 Tbsp. sugar
3 Tbsp. water
Put the rice in a wire strainer and rinse it thoroughly in running water. Drain it and set it aside.

In a big saucepan, put the milk on to boil. Add the sugar and the vanilla extract. When the mixture comes to the boil, add the rice and turn down the heat to the lowest setting. Let it cook very slowly for 45 to 50 minutes, stirring occasionally. When it's cooked, take it off the heat.

Make a caramel sauce in a loaf pan. You can do it in the microwave: put the sugar and water in the bottom of a pyrex pan. Put it in the microwave oven on high heat for three or four minutes. Watch it carefully — it will burn in an instant. When the sugar starts to turn golden brown and thicken up, take the mold out of the oven and turn the pan from side to side so that the caramel coats the sides of the pan an inch high or so.

When the caramel has cooled slightly and firmed up, spoon the rice pudding into the mold. Press it down with the back of a serving spoon and smooth off the top. Let it cool and then put it in the refrigerator for at least three hours. The caramel will liquefy and make it easy to unmold the rice "cake" — when you're ready to serve it, turn it over on a plate or platter. Be careful, the caramel will be liquid and will go all over the place! Cut slices of the cake and serve with a little caramel sauce.