The chou-fleur (“cabbage flower”) or cauliflower is a variety of the standard cabbage, Brassica oleracea, that has undergone centuries of careful selection by growers to produce the plant and vegetable we know today. The cauliflower is harvested immature, before the flowers actually open. 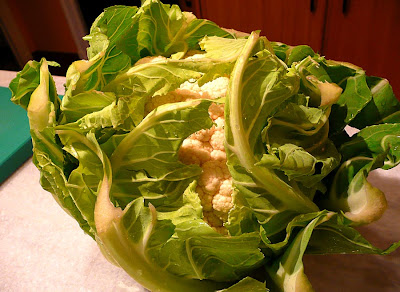 A very fresh cauliflower from Brittany
Typically, only the underdeveloped flowers or "meristems" of the cabbage are eaten. But the fact is that the leaves that envelope the cauliflower are edible too. It's just a cabbage, after all. Those leaves need to be fresh, of course.

A little while back I bought a beautiful chou-fleur at the supermarket in Loches. It was perfectly fresh, judging from the green leaves that had been left around the flower — to protect it from bruising and drying out, I imagine. I'm not sure how often cauliflower is sold this way in the U.S. I hope it's sold with its leaves all the time.

The Larousse Gastronomique food and cooking encyclopedia says that the chou-fleur has "oriental origins" and is an « aliment très délicat, qui doit toujours être acheté avec ses feuilles vertes (d'ailleurs comestibles)... » — a very delicate food product that should always be purchased with its green leaves (which are edible, by the way) intact.

Brittany and the southeast area of France produce a lot of cauliflower, so it is available year-round. I usually buy it during the winter, when the Brittany crop comes in and prices go down. It's good to eat cooked or raw. If it's not overcooked, it doesn't develop the unpleasant odors and taste that many people associate with cooked cauliflower. The same is true of broccoli. 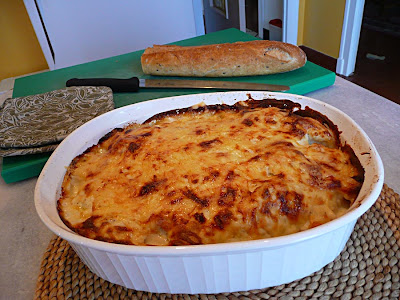 Un gratin de choux-fleurs comme je les aime...
One of the best ways to cook cauliflower is to blanch it or steam it briefly and then finish cooking it in a cheese sauce in the oven. Sprinkle some extra grated cheese over the top of the casserole dish and it will brown nicely. You can mix some chopped ham or smoked pork lardons into the cheese sauce (c'est une sauce Mornay) to turn the cauliflower au gratin into a complete main dish.

I've posted before about making un gratin de choux-fleurs, here and here, with the recipe. That's what I did with the cauliflower I bought in Loches recently. And here is another recipe for finely chopped cauliflower incorporated into the cheese sauce served with pasta. It's something I made a few years ago, trying to reproduce a dish I had in a good restaurant in Half Moon Bay in California in the 1990s.

So the other day, when making another gratin de chou-fleur, I decided I needed to cook the green cauliflower leaves too. I trimmed them up, washed them well, and cooked them separately with water, salt and pepper, and some duck broth and duck fat for seasoning. I also trimmed and chopped the "core" of the cauliflower after I had cut off the florets, diced it up, and added it to the pot with the greens. 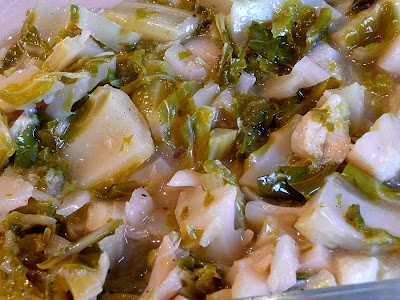 Cauliflower leaves and trimmings cooked as greens
with a little duck fat for seasoning
Both the gratin and the greens were delicious. We ate the greens with some pulled pork "barbecue" — eastern North Carolina style — that I made last week. I bought two boneless pork shoulder roasts and steam cooked them in the pressure cooker the same way I had earlier cooked a pork loin roast. The shoulder made better barbecue, and since I cooked five pounds (2.3 kg) of pork we have plenty of it in the freezer. Pork barbecue made this way freezes really well.
Posted by ckb at 09:36